On My Bookshelf, Part 5 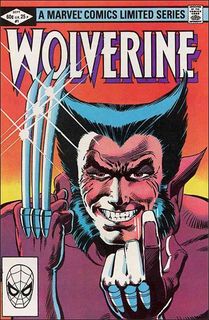 They fight to protect a world that hates and fears them. They’ re Marvel’ s mutant X-Men. They account for a huge portion of my collection and about half of the Marvel bookshelf. I loved this series of trades when it was being published and I was so sad when it was discontinued. It collected the Wolverine stories from the Marvel Comics Presents anthology. It was certainly easier and more enjoyable to pick these stories up in trades.
There are some great stories in here, like a Claremont-Buscema tale that serves as a prequel to Wolverine’ s ongoing series, explaining why he ended up in Madripoor and took the guise of Patch. There are some fun historical oddities, like a Wolverine/Spider-Man team-up by Erik Larsen. And there’s some bad stuff, too. It was an anthology title after all. 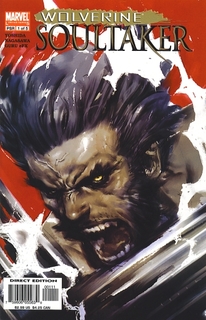 By the late ‘ 80s, Wolverine had become a comic book superstar. A Wolverine guest appearance was almost guaranteed to generate sales. And that meant that Wolverine started to pop up in all kinds of unlikely places. This is essentially a Nick Fury story with Wolverine shoe-horned in. And, unfortunately, it’ s not very good. 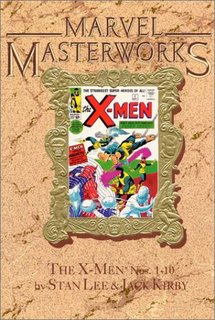 Marvel Masterworks: X-Men Vol. 1, 3-7
Last week, I wrote that the cost of DC’ s Archives and Marvel’ s Masterworks was too much for me. There are, however, two exceptions: DC’ s Spirit Archives and Marvel’ s X- Men Masterworks. These may not be the best stories I’ ve ever read but my love of the X-Men and my historical curiosity make it worthwhile. And there are gems in here such as Steranko’ s short-lived work on the X-Men with Lorna Dane and Mesmero, and the
classic Roy Thomas/Neal Adams run that closed out the Silver Age. This is the reason why the previous entry for Marvel Masterworks is missing volume
2. I had already bought the big black and white Essential. Although I wouldn’ t mind
buying the second Masterworks and selling or trading the Essential, it’ s never been a high priority. 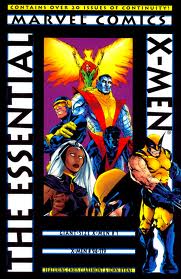 These are the stories that made the X-Men. The first volume contains the classic stories
by Chris Claremont and Dave Cockrum. The good guys include Colossus, Nightcrawler,
Storm and Wolverine. The bad guys include Sentinels, Juggernaut and Magneto. There’ s also the birth of the Phoenix, the introduction of the Shi’ ar, the battle against the Imperial Guard and the epic story in the Savage Land. The second volume features Chris Claremont and John Byrne. It includes some of the greatest stories ever told: the Dark Phoenix Saga and Days of Future Past. 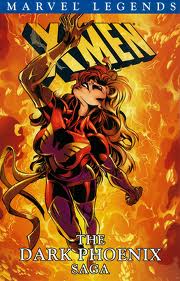 Now that’ s a collection of X-Men comics. I bought the Dark Phoenix Saga before buying Essential X-Men Vol. 2. I like having the story in color which is why I never bothered to sell it off. From the Ashes is another X-Men classic by Chris Claremont and Paul Smith. It collects the supposed return of the Dark Phoenix, as Mastermind manipulates Cyclops into thinking Madelyne Pryor is a new Phoenix. The build-up to that story includes other great tales like Wolverine’ s wedding and the X-Men in Japan. The Morlock Mutant Massacre is the first- and one of the greatest- X-Men crossovers. It would be hard to track down all of the tie-ins as the story sprawled into Power Pack and Thor as well as the X-Men family of titles. Plus, it’ s great to have every chapter collected in one volume and
printed in a preferred reading order. I think that Inferno is an underrated X-Men story. There’ s a great opening with the date between Havok and Madelyne Pryor while the city starts to burn around them. There are great confrontations like having the X-Men square off against X-Factor in one issue and the Marauders in another. And there are even fun tie-ins not included in the trade like Excalibur’ s excursion to New York City. The X-Tinction Agenda, however, is not good but the X-Men completist in me has kept me from getting rid of it. I have a convoluted history with these comics. I had problems with Grant Morrison’s X-Men at first. They were an abrupt departure from the previous X-Men stories (which I had been enjoying). They contained more ugliness than I would like (such as a three-faced mutant in the opening issue). And they were over-praised (fans gave Morrison credit for ideas introduced by earlier creators). I stuck around for a year and a half before finally admitting that they weren’t right for me. At least, not at the time. Later, I was able to appreciate Morrison’ s very different, very modern take on Marvel’ s mutants. I borrowed the later volumes from a library and that’ s what won me over. I enjoyed them so much thanks to the passage of time that I bought the trades online and read them again.

I can’t be quite as magnanimous about these volumes of Uncanny. They collect the Joe Casey and Chuck Austen runs that came out at the same time as Morrison’ s New X-Men.They still have their flaws though I’ m able to see what they were trying to do. At least, I bought them at half-price. 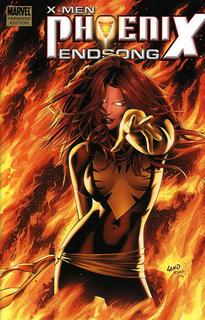 Here’ s another curiosity. I borrowed Phoenix: Endsong from the library and, like Morrison’ s X-Men, enjoyed it enough that I bought a copy for myself.

That takes care of the main bookshelf. However, that doesn’ t take care of my collection which is now too big to be contained by one bookshelf. There’ s also an oversized shelf, an undersized shelf and a miscellaneous shelf. But I’ ll save those for a future article.

Comment by George on November 9, 2010 at 1:21am
"Wolverine" miniseries (1982): Some of Chris Claremont's best writing. Perhaps influenced by Miller, he toned down the excess verbiage and psycho-babble that marred so many X-Men stories (especially in the mid to late '80s) and delivered a lean, taut story.

Comment by George on October 22, 2010 at 6:07pm
I remember the incredible excitement and anticipation over that Wolverine miniseries in '82. Miller and Claremont were at their peaks as fan favorites. Fortunately, it lived up to the hype.

Comment by Jeff of Earth-J on October 22, 2010 at 3:07pm
Wolverine limited series: I re-read this one for the first time in many years in the wake of the Wolverine movie. It still holds up. (The comic book, I mean.) I think it was Rich Lane who once espoused the opinion that the Wolverine saga should have come to an end after this story.

Marvel Comics Presents Wolverine: Ha! I re-read these in the wake of that movie, too!

Blood Hungry: Read it (once) in serial format; didn’t re-read it after the movie.

The Scorpio… Collection?: Are you referring to the original hardcover graphic novel by Archie Goodwin and Howard Chaykin The Scorpio Connection? If so, you’re right that it’s more of a Nick Fury than a Wolverine story. I’m more of a Chaykin fan than you are IIRC, but I’ll admit you’re also right that it’s not very good.

X-Men Masterworks: Y’know what burns me about X-Men Masterworks? (You probably do because this is not exactly the first time I’ve brought it up.) Marvel added an extra issue to the second volume in order to complete a two-part story, but if they’d’ve been thinking ahead a little bit, they could have added that extra issue to volume one had had all the Lee/Kirby X-Men under a single cover!

The Dark Phoenix Saga; From the Ashes: Yay!

Morrison’s X-Men: Drew me back after a ten-year absence. My reation here.

Wolverine: This was one of if not the first trade I bought as well. I was at a convention in '88 if memory serves, and a dealer announced he was selling all of his copies for 5 bucks a piece, so I went and got mine.

Wolverine: Weapon X: I finally got to read this last year. I liked the art better than the story. It was still good, but how could it live up the nearly 20 years of hype?

Mutant Massacre is probably one of my favorite crossovers, and between me and my brother we had nearly every chapter. Inferno I never cared for, it was never my cup of tea.

Peter Wrexham replied to Steve W's discussion A Cover a Day
"The GCD agrees with you, Clark. And I'd just like to add that, though I've been sitting…"
20 minutes ago