On My Bookshelf, Part 7 I’m getting close to the end of what turned out to be an epic series of columns. There are just a few little things left to cover. In this case, literally. The next shelf is the undersized shelf. These are digests and paperbacks. In other words, little books.
Mouse Guard Fall 1152
I wrote about anthropomorphic animals in the last column about oversized comics. Well, here’s another comic starring critters that walk and talk like humans on the undersized shelf. This is more of a straight adventure story, starring the mice that go into the wilds to protect mousey travelers and the havens they call home. But what a great adventure. The art is beautiful. The backgrounds are stunning. And the story is engrossing. Anacoqui bought the second volume, Winter 1152, and I hope to read it soon.

Lone Wolf and Cub Volume 1-28
The complete series. And the only manga in my collection.

Persepolis Volume 1
It’s sometimes weird being “the comic book guy” among your group of friends. People will ask you odd questions expecting you to know the answer. Or they’ll make broad assumptions about your collection. But sometimes the non-comic book friend finds out about something before you do. That’s what happened with Persepolis. One of Anacoqui’s college roommates asked us if Persepolis was any good. She had heard about it and was looking for an informed opinion. However, we had never heard of it
before she mentioned it to us. So the request for an opinion turned into a recommendation. Having now read it, I can happily praise Persepolis to others. I’m not a big connoisseur of independent or biographical comics (as you’d know if you’ve been reading this series of articles) but Persepolis is right up my alley. It takes place during the Islamic Revolution of Iran in 1979- the same era covered by one of my all-time favorite novels. Persepolis brings a personal perspective, showing what it’s like to grow up during an important historical moment. A child- even an adolescent- doesn’t always understand what’s going on or why. Persepolis conveys that innocence and confusion. It’s also surprisingly humorous and joyful.

Courtney Crumrin and the Night Things, Polly and the Pirates
Ted Naifeh produces some great all-ages comics. And by “all-ages,” I mean comics that my wife and I buy for ourselves but are delighted to share with our daughters. They’re accessible to kids and adults alike. I love Polly’s passion. But I’m even more in love with Courtney’s cynicism. She’s an unusual protagonist: cranky and constantly put-upon. But her scowl is more charming than most smiles.

Spyboy: The M.A.N.G.A. Affair
I wrote about Spyboy in the first article. This is one last volume, printed digest-sized and in black and white. The cost-cutting moves were a pretty clear sign that this series was on its last legs at this point,even though the stories were as good as ever. 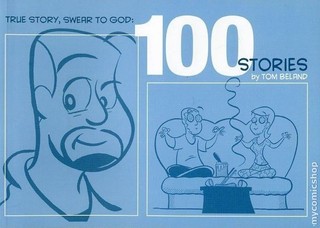 True Story, Swear to God: 100 Stories
I read the True Story comic books before going back and reading the original comic strip that launched
the series. The books are a wonderful combination of humor and emotion as Tom Beland relates his
real-life romance with Lily Garcia. The strips are straight humor. There are fewer tears than in the comics, but there are still plenty of laughs.

The Liberty Project
Scattered here and there on my shelves are a few books that I don’t think are very good, but that I haven’t yet convinced myself to give away. Here’s one more: the Liberty Project by Kurt Busiek and James Fry. I’m a pretty big Busiek fan so when I saw this early series of his, I had to give it a try. It’s somewhat interesting in that I noticed themes that would recur in later series. But it’s not very good, and I’ve never bothered to re-read it.
Runaways Vol. 1-3

I was skeptical of Bill Jemas and Joe Quesada’s New Marvel. So I didn’t trust them when they trumpeted the Runaways as a great new series. I didn’t even believe their claims that it was critically acclaimed. But the opinions of some trusted board members brought me around. And the availability of these affordably-priced digests made it a lot easier to jump on the bandwagon. Runaways combines interesting characters with an unique perspective on the superpowered lifestyle.

Tech Jacket
This is one of Robert Kirkman’s titles from before he became “the” Robert Kirkman. Techjacket slightly predates Invincible (by two months) but they were both part of Image’s big push of new heroes in the
winter of 2002-03. The push fizzled out pretty quickly but it also introduced Firebreather. Tech Jacket is a fairly interesting character. He has a similar m.o. to the most recent Blue Beetle in that he’s a regular teenager who is gifted with an alien artifact that turns him into an interstellar warrior. It’s been fun to see him as a recurring guest-star in Invincible’s current Viltrumite War. Unfortunately, the Tech Jacket back-up strips aren’t as good as the original series.
Star Wars: Clone Wars Adventures Vol. 1-10

This is another great series for both grown-ups and kids. The stories are drawn in the style of Genndy Tartakovsky’s Star Wars: Clone Wars cartoons. More recent volumes have tried to emulate the current digital Clone Wars cartoon but that style doesn’t translate to the page as seamlessly as Tartakovsky. The stories are great as well. The authors use the format of a short-story anthology to their advantage. They balance tales focusing on the big stars like Obi-Wan Kenobi and Anakin Skywalker with others that
highlight minor characters like Kit Fisto and Plo Koon. There are even stories told from the point-of-view of a nameless droid and a random bystander.
That’s all of the little books. Thanks for paying attention so far. And don’t forget to check out the series
finale next week.

Comment by Travis Herrick (Modular Mod) on November 15, 2010 at 3:56pm
I have the single issues of Mouse Guard...somewhere. It was coming out while I was moving so they are scattered who knows where. I was happy to find this trade on sale for $5 bucks at Half Priced Books and picked up a copy. I just re-read the story and I still like it a lot. One of the few series I ave in both singles and trades.

Someday i will put my bookshelf back up (probably when I move again), and I just loved they way the Lone Wolf & Cub series looks lined down one of the shelves. A fantastic series as well.