'Pogo' returns and he is ours -- in classy hardbacks

“We have met the enemy and he is us.”

That famous quote is from the comic strip Pogo, and truer words were never spoken – even though they were spoken by an anthropomorphic opossum. That little fella, Pogo, was the star of a comic strip written and drawn by Walt Kelly (and his heirs) from 1948 to 1975, and is well remembered for its whimsy, political satire, sociological insight, bigfoot slapstick, philosophical musings and clever wordplay.

But “we have met the enemy and he is us” didn’t start out that way, nor did Pogo Possum begin as we know him now. Kelly penned “We have met the enemy and we are his’n” for a cartoon he did as a freelancer for the “Bridgeport (Conn.) Post” newspaper in 1931. Then came five years honing his craft at the Walt Disney Studios, where he worked on Dumbo, Fantasia and Pinocchio. That translated to drawing Disney and other “funny animal” characters for Dell Comics in the early ‘40s, where he created Pogo Possum and Albert the Alligator for the first issue of Animal Comics in 1943.

Pogo and Albert were only supporting characters in Animal Comics, but took center stage when Kelly took his creations to The New York Star as a newspaper strip in 1948. The Star folded within a year, but Pogo immediately re-launched with the Hall Syndicate, whereupon Kelly started the strip over and even re-drew some of the Star strips. There were no further perambulations; Kelly had found a home for his swamp critters that would last the rest of his life. 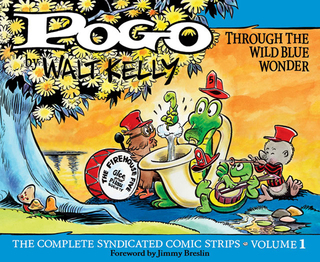 Those wonderful strips entertained generations of Americans, and now, thanks to Fantagraphics, will continue to do so. Pogo has been reprinted piecemeal over the years, but Fantagraphics is archiving the entire run chronologically in a 12-volume, hardback set, supervised by Walt’s daughter Carolyn Kelly.

These early strips also introduced a number of Pogo conventions. For example, the name of Pogo’s fishing skiff routinely changed, as Kelly always renamed it in honor of whatever newspaper added Pogo to its comics page. The tradition of mangled Christmas carol begins here, with “Deck Us All with Boston Charlie” and “Good King Saurkraut, Look Out! At Your Feets Uneven.”

Absent, though, is what we normally associate with Pogo: Political satire. In those days, as now, it was considered commercial suicide to make jokes about politics, for fear of alienating half your audience. Kelly wasn’t brave enough to do it – not yet – in these early strips. But it’s coming.

Strangely, there were several typos in the introductory material. It didn’t spoil my enjoyment, and I’m sure they will be corrected in future printings. I mention them only because they jangled my copy-editor sense, and were surprising, given the overall quality of the book.

Volume 2, Bona Fide Balderdash ($39.99), arrived at the close of last year. This book gives us a foreword by satirist Stan Freberg, plus more text by Evanier, R.C. Harvey and others. Of course, the strips are the star, carrying us through 1952 – again, both dailies and Sundays.

In these strips we meet the Barnum-like P.T. Bridgeport, and finally politics begin sneaking in the back door. Bridgeport launches the “Pogo for president” campaign – much to Pogo’s distress – which became a quadrennial event.

In addition to the new Pogo, two more classic comic strips have new archival releases, both from Titan Books.

Hagar the Horrible: The Epic Chronicles: 1977-78 ($19.95) is the fourth volume collecting the adventures of the world’s mildest Viking. I remember Hagar appearing in my local newspaper in 1973, launching fully formed as if leaping from the brow of Zeus – unlike most strips, where the art and lead characters tend to evolve until a pleasing and workable status quo is achieved. It made me wonder if Hagar had been in existence for years before it came to my home town, but the truth is that creator Dik Browne had been drawing Hi and Lois for decades (which he co-created with Beetle Bailey’s Mort Walker), and came to Hagar at the peak of his powers at age 56 or so.  If you like Vikings, fine cartoon craftsmanship and/or a good gag a day, you can’t go wrong with Hagar.

Speaking of Mort Walker, Beetle Bailey: The Daily & Sunday Strips 1966 ($19.95) has also arrived. This is only the second Titan collection, as their archives series begins with 1965. That’s probably because a publisher named Checker has already made a stab at archiving Beetle, beginning with the strip’s launch in 1950. Regardless, though, the mid-1960s is where the strip really meshed, with all the characters in their modern form, and is therefore the second-best place to begin an archives.

I was finally able to get my hands on Volume Two of The Complete Dell Comics Pogo and complete this collection. Now I'm waiting for Volume Eight of the syndicated strips. One of the forewords in the Pogo book mentions that one thing he learned working at Disney was how to give cartoon characters a sense of weight and movement. He really did!

I'm actually reading Pogo Vol. 1 right now. This is a book that's really enjoyable. I love Walt Kelly's ear for dialogue and his effort to Southern-ify said dialogue. Half the fun of the book is untwisting the dialogue from its backwoods-speak. The other half of fun comes from Kelly's amazing ink work. Man-oh-man, this guy's inking is just wonderful. I wish every current inker could ink a tenth as well as Kelly!  Inking aside, just look at how well he designs his anthropomorphic characters. These characters are practically alive!

Interestingly enough, I've also read the first volume of Beetle Bailey too! What I found exciting about that (but not the volume you mention above) is how the comic strip morphed so quickly from one thing (humor comic about a college kid) into something else entirely (humor comic about a soldier).

I thoroughly recommend both books, but comic fans are doing themselves no favors by skipping the Pogo book.

Jeff of Earth-J replied to Steve W's discussion A Cover a Day
"Bozo the Robot appears regularly (with new dialogue) in Sham Comics."
8 minutes ago

Jeff of Earth-J replied to Emerkeith Davyjack's discussion All-purpose newspaper strips discussion
"While everyone is in the mood. allow me to recommend Peanuts: A Tribute to Charles M.…"
2 hours ago

Jeff of Earth-J replied to Steve W's discussion A Cover a Day
""Neutro does not know the difference between right and wrong." Here's what my guide…"
3 hours ago

Peter Wrexham replied to Steve W's discussion A Cover a Day
"Here's what the last few lines of the index now look like. Despite initial worries that…"
4 hours ago

MethodEng replied to Steve W's discussion A Cover a Day
"Bender as another movie robot. Image courtesy of GCD"
5 hours ago

PowerBook Pete, the Mad Mod replied to Emerkeith Davyjack's discussion All-purpose newspaper strips discussion
"ClarkKent_DC is a gentleman and a scholar! What's the strip after Marmaduke?"
5 hours ago

The Baron replied to Steve W's discussion A Cover a Day
"It's Bender's grandfather!"
6 hours ago