“The fans were demanding [a Power Girl book],” said co-writer Jimmy Palmiotti, “DC Comics wanted to try it and the guys in charge liked what we did on a few other books and rolled the dice and gave us a shot.” 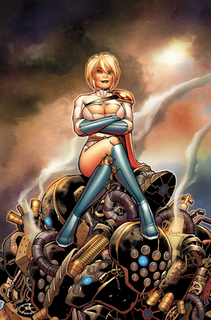 Co-writer Justin Gray acknowledged the challenge. “Everyone has preconceived notions about the character,” he said. “She’s ‘a component of a team and not a star,’ ‘she’s confusing and redundant,’ and ‘she’s a breast joke’ and so on. The challenge and goal is simply to make an enjoyable comic book and not worry about anything else.”

How did this character get so complicated? It took a crisis.

When she debuted in 1978, Power Girl had a simple backstory: She was the Supergirl of Earth-2, which at the time was an alternate Earth where the superheroes DC published in the 1940s hung out. Having had a head start on “our” Supergirl, she was older, stronger and, yes, a heckuva lot bustier. Unsurprisingly, the Blonde Bombshell was immediately embraced by (mostly male) comics fans.

But in 1986 Earth-2 was written out of DC’s history in something called Crisis on Infinite Earths, requiring a new origin for Power Girl. For the record, let’s make that “origins.” In the ensuing years, various writers have re-written her as the heir of the Atlantean sorcerer Arion, a mother (briefly), a hero in the Bottle City of Kandor, a member of various super-teams and the star of a book (Sovereign Seven) that was erased from DC history. And now? In 2007 DC restored alternate Earths to its backstory, so now Power Girl is … the Supergirl of Earth-2. Again!

“We were able to go back to the origin that makes the most sense, and build a story out from there,” said Dan DiDio, the editor in charge of the DC superhero books. “You have an easy reference point as a starting point for a Power Girl series. She’s the Supergirl of Earth-2. Now we’re off to the races. … If you try to explain magic, and blah, and all these different things, Arion and Atlantis, and everything else that was going on there … it has absolutely nothing to do with the character as she exists right now.”

“We’re not all that concerned with trying to fit all of her continuity in one package,” he said. “I realize that’s a popular trend lately but ‘just pick up and read the book’ is our philosophy. Stop worrying about how everything fits moving forward.”

Also coming on board is Amanda Conner, an artist who already has a history with the character – and is noted for her skill at drawing pretty girls. According to DiDio, Conner is committed for at least 12 issues.

So what will P&G do with PeeGee? One aspect they will lose is the self-pity that dogged the character when her background was in a blender.

“We feel it is important to put that ‘boo-hoo I have no home’ mentality behind her,” Gray said. “She’s tall, beautiful and can fly, not too many people are going sympathize with someone like that who [complains] all the time about how tough life is.”

But life will not be easy. Power Girl will have to deal with a new supporting cast in her secret ID as Karen Starr, CEO of a computer software company.

“Dealing with corporate responsibility, mounting bills and irate scientists is surprisingly more difficult than punching villains in the head,” Gray said. “Interpersonal relationships aren’t easy when you’re an alien goddess who can crush a car with her hands.”

Said Palmiotti, “I am a fan of the soap opera side of comics and giving Karen a well-rounded supporting cast will offer up situations and surprises that you wouldn’t normally find in a big superhero fight book. Her supporting cast is going to show us sides of Karen we haven’t seen yet.”

And, of course, there will be romance.

“How could we avoid that?” Palmiotti said. “Life, love and death, what she wants and what she fears. These are the things we cover and uncover issue after issue. Given the chance and sales, we really want to make you not only care for her, but feel she is a real person in your life. Hey, we shoot for the stars.”

Comment by Rich Lane on June 12, 2009 at 4:17pm
The one thing I really hope they downplay in the new series is PG's figure. Yes, it will always be an integral part of her character, but we don't need guys ogling her chest every single issue. It makes her seem rather one-note if it's referenced all the time. She strikes an impressive look, and that was acknowledged in the first issue. Now let's move on.

Comment by Lumbering Jack (M'odd-R8-Tr) on June 12, 2009 at 9:13pm
It's interesting that you picked PG to write about. Certainly she's not a character that's on the radar of anyone outside of fanboy circles. I haven't read many comics with her in years now.
Personally, I thought she was OK, but great figure or not, I wonder if she can hold a series.
I wonder, perhaps, if this is "Ms. Marvel"-envy from DC. I certainly see them as comparable -- second tier characters with decent potential, but inconsistently handled for much of their existence.

Comment by Cavaliere (moderator emeritus) on June 15, 2009 at 12:47pm
I confess that I've had little time for Power Girl. She's been so often portrayed as surly that I've never been able to warm to her. Also, she (through, of course, editorial & writer's fiat) chosen to wear a costume that flaunts her chest and the complains when men notice. One of the best things I think DC could do for the character is to simply close the hole in her costume's chest. If they can also make her, well, like-able then that'd be terrific, too.

Comment by Rich Lane on June 15, 2009 at 1:07pm
I agree that it should be either/or. Either she removes the chest circle or is depicted as enjoying the attention. There's no logical way to present it other than those choices without making her into a manipulative b----- who keeps the circle simply so she has something to complain about.

Comment by Rob Staeger (Grodd Mod) on June 15, 2009 at 2:36pm
I remember giving my little nephew a copy of the Countdown poster -- a great representation of DC's heroes. I didn't expect the comic itself to be kid-friendly, but that cover was... or so I thought. Soon after I passed it on to Dan, my sister took a black marker and altered PG's costume to something that covered her more.

Or at least the white out...

Comment by PowerBook Pete, the Mad Mod on June 15, 2009 at 9:34pm
I'm hoping that Amanda Conner will alter the costume some. She's drawing the Supergirl feature in Wednesday Comics without the bare belly.

I agree that it should be either/or. Either she removes the chest circle or is depicted as enjoying the attention. There's no logical way to present it other than those choices without making her into a manipulative b----- who keeps the circle simply so she has something to complain about.


Whoa, that's not cool. She either likes the attention or is a manipulative b----? What if she just likes the aesthetic? What if, as Geoff Johns depicted in the Power Girl mini a couple years ago, she feels it symbolizes something? None of that matters, because she knows how men are going to react to what she's wearing, so she should just admit she enjoys it or not dress that way?

I can't say as I'm particularly cool with the "if you don't like the way I react to your wardrobe, you shouldn't dress that way" school of thought.

Comment by Rich Lane on June 15, 2009 at 10:32pm
Nope, I stand by my statement here, Alan. If a woman dresses in a suggestive manner, Hell, if a GUY dresses in a suggestive manner, and it's a statement that they want people to notice their goods. The only exceptions I'd give here are outfits whose utilitarian design, a swimmer or a runner for example, makes it revealing or those from other cultures whose ideas of modesty are different this society's.

There is no utilitarian reason for the chest hole. It's there as an aesthetic choice. There's no reason for it other than as a...er...window to her heart.

This does NOT mean I'm saying she wants men to leer. But she has been shown rolling her eyes in disgust when someone as innocuous as Jimmy Olsen snuck a half second glance and she caught him. I find her disdain for the fact that guys look...not just leer...simply look to be utterly disingenuous. It's male writers trying to have their cake and eat it too.