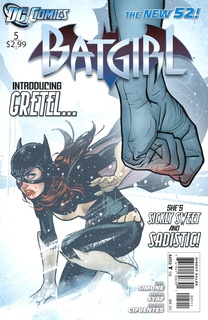 Batgirl 5: One of my favorite new titles.  I love the combination of action and introspection.  I like Barbara’s combination of confidence and fragility- “I know how to do this, but I haven’t done this in a long time.”  I like that Gail Simone is trying to give Batgirl a Rogues Gallery of her own (The Mirror in the first arc, Gretel in this issue).  And, oh yeah, I love the Bruce Wayne guest spot.

Buffy the Vampire Slayer Season 9 #5: The first arc was a little weak as far I was concerned so I’m happy to see Buffy back to form with this issue.  I enjoyed the appearance of the first slayer and the dark Tinkerbell in Buffy’s dream.  It was the right level of weirdness and coolness.  I’m glad that Buffy, and especially Willow, are regaining a sense of purpose.  And I’m intrigued by the new complication in Buffy’s life.  Andrew Chambliss doesn’t quite have the patter done yet but there are hints of it.  Good stuff.

Captain America 7: This used to be one of the best comics on the stands.  Now I can’t help but think this used to be better.  There’s nothing particularly wrong with this issue.  But there’s nothing particularly great either.  I would have preferred to see Baron Zemo back for more instead of the underdeveloped Captain Bravo.  And there doesn’t seem to be any reason for Cobra and company to be using the Madbomb.  I know that’s supposed to be part of the mystery but we need more than what we’ve been given. 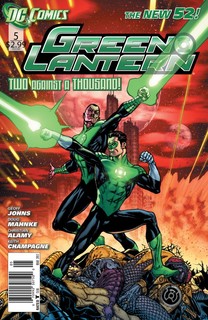 Green Lantern 5: Meanwhile, Green Lantern continues to impress.  Sinestro is as cold as ever.  He’s really chilling when he’s in control.  Hal’s desperation has made for an interesting perspective on his character.  I appreciated the way in which Hal convinced the Korugarians to work with Sinestro, if only temporarily.  The resolution with the Sinestro Corps happened a little too quickly for my taste but the issue was yummy as a whole.

Invincible 87: I think I finally figured out why I’m getting tired of Invincible.  It’s too talky.  I understand that Kirkman is trying something new by having Invincible save the world with his brains instead of his fists.  But, boy, is it boring.  Mark tries to convince Eve that he’s doing what’s right.  He argues with Cecil.  Then he argues with Allen and Oliver.  There are some fisticuffs at the beginning and the end but I’m running out of patience.

The Stand: The Night Has Come 6: The afterword summed up my feelings nicely.  It’s nice to see this wonderful series completed.  But it’s bittersweet to know that I won’t have a new issue waiting for me next month.  This has been one of the best adaptations I’ve ever seen.  Roberto Aguirre-Sacasa kept just the right pace and got straight to the heart of the characters.  Mike Perkins used all of the tools in his comic book arsenal, while others tend to draw adaptations that look like a series of movie stills.  Even in this issue, Perkins includes ghost silhouettes, overlapping images, white space and black panels.  I’ve never had a single complaint about this series and my only one now is that I’m sad to see it go. Wolverine 300: A very cool anniversary issue.  There’s some great art by Adam Kubert, Ron Garney and others.  And Jason Aaron invents some interesting scenarios.  We see Wolverine’s adopted daughter Amiko as a slightly out of control teenager.  We hear a Japanese lord lament the low reputation of their native ninja, after being defeated by so many American superheroes.  And, oh yeah, Sabretooth shows up to throw a monkey wrench into Wolverine’s plans.  Good pace, good action and a good size.

Wolverine & the X-Men 4: This comic is freaking awesome!  I expected it to be good considering that Aaron has done a great job with Wolverine in his own title, but I didn’t expect that this series would have such a sense of humor.  I’m cracking up every couple of pages.  I especially enjoyed the classroom scene with Quentin Quire as the smart aleck, Kid Gladiator as the arrogant prick, Broo as the brown-noser and Genesis as the shy, new kid.  Plus, I was impressed at the way Jason Aaron confronted the disparate portrayals of Wolverine with his speeches to X-Force and the faculty.

X-Men Legacy 260.1: And over here, we have the B team.  I like a lot of these characters but right now they’re living in the shadow of Wolverine’s team.  So far, they’re doing the same things that we see in Wolverine & the X-Men, just not as well.  Also, while I’m not opposed to romantic triangles, the new flirtation between Gambit and Frenzy seems like a rehash of the early days of Scott and Emma.  I’d love to see this team take their act on the road and develop an identity of their own. 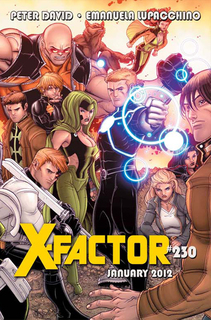 X-Factor 230: There’s not a single bad guy in this issue and I didn’t mind one bit.  Madrox is gone, X-Factor is left without a leader and all of the members are too busy arguing with each other to do anything else.  It can be hard to write a transitional issue like this, but Peter David pulls it off with flair by focusing on the tension between the characters.

Memorial 2: I’m still enjoying this series, though this issue didn’t move forward as much as I would have liked.  The main character is still lost and confused, though she’s starting to figure things out.  Of course, the villains aren’t going to give her that time.  And her allies may or may not be trustworthy.  Actually, a lot more happened than I originally thought; Chris Roberson’s writing is so effortless I barely noticed.

Near Death 5: Near Death is quickly leaping to the top of my list.  I absolutely loved this two-parter in which one of Markham’s old peers tries to kill him.  We learn a lot about Markham through his relationship with Sutton, his best friend who was injured in an explosion last issue, and Detective Cahill, with whom he has an uneasy truce.  Plus, the confessional scene did a great job of showing us what Markham is really thinking.  Even so, this issue wasn’t all talk.  There’s a fire, a car bomb, a kidnapping, an ambush and a change of scenery.  Jay Faerber is giving us strong characterization and rapid paced action at the same time. Star Wars: Agent of the Empire 2: When Dark Horse advertised this series as “James Bond meets Star Wars,” they weren’t kidding.  They even have a “Bond girl” and their own version of Q.  So far, it’s all light-hearted fun.  Yet there’s the potential here for a lot more and I wouldn’t mind seeing them go for it.  There are hints of the Empire’s xenophobia, but it’s not really addressed in the story.  And I’d like to see Agent Cross interact more with other imperials so that we can see the difference between an agent who does his job well and the villains he has to work with.

Wonder Woman 5: After a strong start, Wonder Woman has become a little uneven.  I like most of the new takes of the Greek gods but the depiction of Poseidon as a giant fish was a bit of a miss.  Plus, new character Lennox isn’t nearly as cool as he- or Brian Azzarello- thinks he is.  The story is strongest when it stays focused on Wonder Woman.  Her quest to protect Zola is heartwarming and her plan to confront Hera is courageous.

Uncanny X-Men 5: There are two core X-Men titles and they’re both excellent.  Kieron Gillen gives us a mystery worth investigating with a hyper-evolved county in Montana.  But the real strength of this issue is the interaction between the characters.  It’s fun to see Illyana trying to draw the light out of Colossus, after so many years of the opposite.  Magneto’s conversation with Psylocke is illuminating- and I’m glad to see Gillen deal with the X-Force question as openly as Aaron did in Wolverine & the X-Men.  Plus, I was pleasantly caught off guard by the playful teasing between Hope and Namor.  Action, mystery, character, humor- there’s a little bit of everything in here and it all works well.

Uncanny X-Force 20: X-Force has always been a balancing act.  On one side, there’s the dark subject matter of a team that does dirty deeds so that other mutants won’t have to.  On the other, there’s the humorous repartee of its main characters, especially Deadpool and Fantomex.  They haven’t fallen off of the tightrope yet but they’re starting to wobble.  However, the biggest problem with this issue was the art.  Greg Tocchini once had a beautifully detailed style, at CrossGen and on Superman.  But here, his finishes are so rough that it’s sometimes hard to tell exactly what’s being depicted.  That’s a major problem in the battle scenes.   It also makes it doubly difficult to empathize with the characters as they straddle the line between expedient and evil.

We don’t have much in common, you and I, in our reading lists, and for the two titles we do (Batgirl and Captain America), I would flip your assessment, one for the other. I dropped Invincible when I realized I missed one of the trades and never went back to pick it up. Someday. I didn’t finish reading Buffy Season Eight (another tradewaiting experiment) when I realized I had lost the plot and wouldn’t be in the mood to finish it until after I’ve re-watched the seventh season on DVD. Again, someday.