The new movie Red, starring Bruce Willis, is based on a comic-book miniseries. A very, very short miniseries, which is probably why the movie adds so many new characters, which are now starring in their own comics. From comics to movies to comics again – it’s the new circle of life. 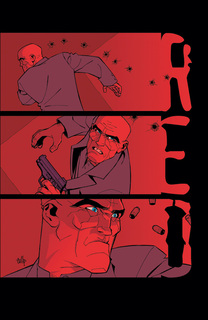 The original Red was just an obscure, three-issue, stand-alone miniseries published by Homage, a DC Comics adult-readers imprint, in 2003-04. Written by Warren Ellis and drawn by Cully Hamner, Red is so short that it had to be collected with another Ellis mini (Tokyo Storm Warning) to fill out a trade paperback.

Like most Ellis stories, Red had plenty of over-the-top violence, tempered by dry wit and the blackest of humor. It starred Paul Moses, a retired, ex-CIA “wetworks” operative, who is suddenly targeted for assassination by a new administration eager to bury his role in U.S. foreign policy. Moses may be old and inactive, but he has lost none of his mad skilz, and goes from “green” status to “red,” hunting those who want to see him dead. Violent (but witty) encounters ensue, with readers treated to flashbacks from Moses’s career, making Red a short anthology.

Too short, so Red the movie has added three more retired ex-spies to flesh out the story to 111 minutes, including the stoic Joe (Morgan Freeman), the paranoid Marvin (John Malkovitch) and the icy Victoria (Helen Mirren). Moses (whose first name is inexplicably changed to Frank for the movie) brings along a civilian love interest, Sarah (Mary-Louise Parker), to serve as the audience’s POV character.

As noted, Joe, Marvin and Victoria weren’t in the original Red. But now they – and Frank – have one-shot prequels from DC imprint WildStorm ($3.99 each). Red, "Joe" is set in Moscow in 1981, where Joe is a handler who decides which of his agents to sacrifice for the greater good. Red, "Victoria" (Buenos Aires, 1982) explores the single time the MI6 assassin fell in love, with a man who becomes important in the movie. Red, "Marvin" (New York, 1987) explains the origin of the character’s psychosis, while he avoids being terminated by Frank. And Red, "Frank" (Cairo, 1997) follows our anti-hero on an assassination assignment while mentoring a young spook.

These are straightforward, professional stories, and will undoubtedly enhance the movie-going experience. But, unfortunately, none are by Ellis. Relentless ultra-violence can only entertain for so long, and without Ellis’s sardonic snark it’s hard to sympathize with these ruthless, remorseless killers.

Oh, well. At least the new trade paperback ($14.95) is all-Red now, as it includes a Red: Prequel Special ($4.99), starring Frank, that I haven’t seen yet. Count on the other four prequels to get the TPB treatment if the movie’s a hit. 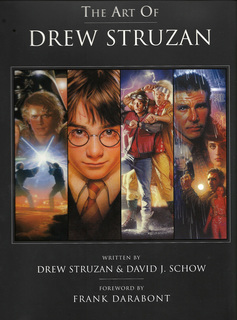 Another oddity crossing my desk is The Art of Drew Struzan (Titan Books, $34.95), a coffee-table art book about a man who has recently retired from the business of painting movie posters. That’s not an aspect of movies many of us think about, and it’s a profession that’s largely dying out. (According to director Frank Darabont, who writes the introduction, the blame goes to Photoshop.)

This book demonstrates what a tremendous loss that is. Struzan’s uncanny ability to capture the essence of a movie in a single scene and to reflect an actor’s personality is astounding. And with this peek behind the curtain, you see he had to do it numerous times for each movie, with each image just as delightful – and as fully rendered – as the last. If you want an idea what’s in this book, think of the posters you saw for Back to the Future, Blade Runner or Raiders of the Lost Ark. I’ll bet those images are easy to summon to the mind’s eye – which is a testament to just how awesome Struzan and his breed were. 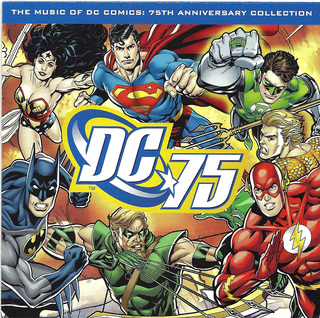 A third unusual item is The Music of DC Comics: 75th Anniversary Collection ($14.98).

Mostly the 31 tracks are intros to various cartoons, with the familiar, stentorian voice of Ted Knight (the obnoxious anchorman Ted Baxter on The Mary Tyler Moore Show) introducing various Super Friends. Interesting once, but the novelty wears off fast.

Skip over those, and listen to the good stuff. I wish they’d included more of the cooler movie, cartoon and TV themes instead of all those idiotic intros, but what is there is (barely) sufficient for the $15, and as familiar as an old family friend.

Comment by Jeff of Earth-J on October 22, 2010 at 3:37pm
DC 75 CD: I agree with you about the relative merits of some of the tracks, but I have to move my enjoyment level relative to yours way higher on the scale. I’m enjoying the hell out of this CD! Conspicuous (although understandable due to its ready availability elsewhere) in its absence is the theme to the George Reeves TV series. I would also have liked to have seen the theme of the ‘90s Superman cartoon included in this collection. Other than that, the Superman/Superboy material alone is far superior to the so-called “Ultimate” Superman Collection from the ‘90s.

Also missing are the themes from the ‘90s Batman cartoon as well as the more kiddie-friendly version which followed it. (Didn’t watch the cartoon but would have liked the theme music to have been included.) I’m also disappointed they included the twangy electric Justice League Unlimited theme but left off the far superior orchestral arrangement which preceded it; I would have included them both. I also question the logic of inserting the Swamp Thing, Shazam and Green Lantern First Flight themes in the midst of the 1967 Filmation themes rather than grouping them all together, but at least they’re all there.

I’ve never seen the Batman: The Brave and the Bold cartoon, but it’s got one helluva snazzy theme! Most of what I mentioned above is what’s missing, but I want to make clear I’m very excited about what’s included. It just could have been even better. I can hardly wait for Marvel to release a CD such as this one. They have fewer to choose from (fewer iconic themes, anyway), but the themes from the 1967 cartoons along would make such a project worth it.

Comment by Cavaliere (moderator emeritus) on October 25, 2010 at 1:12am
The Red limited series is available digitally through ComiXology. I've only bought the first issue thus far but liked it enough that I'll buy the other two issues sometime. Whether or not I buy the character prequels (also available digitally) depends on how much I like the film once Jenn and I have the chance to see it. For what it's worth, her parents went to see it and loved it.