Wonder Woman is one of the longest-running characters in American comics, which allows for a lot of different interpretations. Showcase Presents: Wonder Woman Vol. 3 (DC Comics, $17.99) reprints the apex of one such editorial vision. 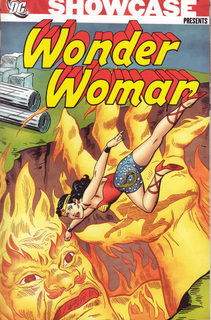 This tome collects 19 issues of Wonder Woman from 1963 to 1965 – almost 500 pages, albeit in black and white. And while the stories are often kind of silly, they were that welcome comics rarity: Comics that dared to appeal to girls. For that alone they should be celebrated.

This volume is the peak of the second memorable WW era. The first was by writer/creator William Marston and stylized magazine illustrator H.G. Peter, one that involved a lot of questionable psychobabble and an over-reliance on bondage imagery. But for all that, the Amazing Amazon’s comic books from 1940 (when she debuted) to 1947 (when Marston died) were ones that enthusiastically embraced the heart-warming concept that love conquered violence, and which frequently took whimsical flights of genuine fairy-tale fancy that appealed to young girls and boys alike. (That era is currently being reprinted also.)

After Marston’s death, this pacifist character was taken over by writer-editor Robert Kanigher, otherwise best-known (ironically) for war comics. For roughly a decade, Kanigher’s run was drab and unremarkable – and, to be fair, hobbled by Peter’s declining health, and DC’s 1950s emphasis on conformity and domesticity, which isn’t exactly Wonder Woman turf.

But the strip blossomed anew in 1958, when Peter was replaced by penciller Ross Andru and inker Mike Esposito, who were frequent Kanigher collaborators in the war books. This, says Les Daniels in Wonder Woman: The Complete History (DC Comics, 2000), “seemed to free the writer-editor from the pressure of the past, and he soon embarked on the most creative and best remembered period of his long tenure as the Amazing Amazon’s chronicler.” He also, Daniels said, “seemed to be reaching out for an audience of young girls.”

One tactic for reaching that audience was the introduction of Wonder Girl (1959), the adventures of Wonder Woman as a teenager. In addition to acts of derring-do on Paradise Island – which seemed to inhabit a timeless, mythical place where dinosaurs, Greek gods, Phantom Fisher-Birds and other cryptozoology appeared without explanation – the young princess had to deal with the romantic attentions of Mer-Boy and Bird-Boy (which were exactly what they sound like).

Even though technically cross-species romance, these sweet stories of teenage courtship proved popular enough for Kanigher to introduce stories of Wonder Tot, Wonder Woman as a baby, in 1961. Later that year he abandoned reality altogether by writing self-described “impossible stories,” featuring “the entire Wonder Family,” with Wonder Queen (Diana’s mother, Queen Hippolyta), Wonder Woman, Wonder Girl and Wonder Tot all appearing together as a sort-of team. The only nod to the fact that Wonder Woman was herself three of the four stars at different ages was usually no more than a throwaway reference in the introduction. Then it was on with the “impossible” show!

Despite the innovation, I found Kanigher’s writing leaned toward the ham-handed and repetitive. He favored staccato, three-panel progressions that hammered his point home like a baseball bat (or just killed space). And he tended to repeat subject matter a lot, especially dinosaurs. And he was somewhat inconsistent in his mythology, like sometimes mixing up Athena, Aphrodite and Artemis, or changing Diana’s super-powers on the fly.

But he was remarkably consistent in portraying love interest Steve Trevor as an incompetent, petulant, chauvinist who, like Lois Lane, was too stupid to see past a pair of glasses to recognize the person he loved. Oddly, I think Trevor’s behavior was meant to be admirable for the times, but just doesn’t age well.

That being said, Kanigher’s stories never dragged. They were occasionally inventive. And sometimes he flirted with the fairy-tale quality so necessary for the original Princess Diana.

As to art, Andru and Esposito were fairly pedestrian. But they were clear and concise storytellers, and their Diana was – amazingly – somewhat small breasted and petite. That’s rather refreshing compared to today’s Mammazons. Plus, they did good dinosaur.

This volume shows the Kanigher/Andru/Esposito team at their vital peak, with the “Wonder Family” virtually taking over the book. The next volume’s stories will shift into some odd sales-boosting experiments and the team’s 1968 exit. So read now for the best this team had to offer.

It isn’t Edith Hamilton, but it isn’t bad.
Contact Andrew A. Smith of the Memphis Commercial Appeal at capncomics@aol.com.

Comment by Eric L. Sofer on February 12, 2010 at 7:41am
ITEM: Of course, the "Wonder Woman Family" was the concept that gave us Donna (Wonder Girl) Troy* as a real character, albeit a somewhat serendipitous one.

ITEM: And we should remember that Mer-Boy was probably a precursor to Supergirl's "steady" boyfriend Jerro... I dunno if that's two rights make a wrong or vice versa, but the idea was solid enough to re-use.

ITEM: Y'know, Wonder Woman has been around for nearly 70 years. There was SOMETHING that kept her viable in the 50s, through the great collapse, and while Bob Kanigher's writing has never been my favorite, and Andru-Esposito weren't my favorite artists, they were eminently solid enough to keep a good monthly Wonder Woman book on the stands.

I think I'll be picking this one up. It sounds like fun, and (speaking to the Showcase/Essentials concept) sometimes the art in these is even better without color than with; it SURELY lets you know who the good artists were, and who the others were that hid behind a four color curtain in the corner.

Comment by Jeff of Earth-J on February 12, 2010 at 11:26am
I have Wonder Woman Showcase Vol. 1 (which I acquired in trade from Other-Jeff for Essential Silver Surfer Vol. 1, IIRC) but I haven't read it yet. I prefer the color tpb reprints (three so far) of the Sekowsky era and (as always) eagerly await the day DC sees fit to reprint the series of stories in which Wonder Woman seeks to regain her JLA membership.

Comment by Captain Comics on February 12, 2010 at 11:36am
I didn't have room to mention this about Kanigher, but one of the things he tended to repeat was .... swordfish. If a character went underwater, he or she was bound to encounter a swordfish.

In addition, usually a giant octopus, sharks and giant clams. If the latter was introduced, bet money that it would close on the hero (or the significant other, perpetually in peril). Best of all? A swordfish fighting a giant octopus or sharks. While someone is trapped in a clam.

Since Kanigher was all over DC, and I read so many of those books as a child, I absorbed that trope subconsciously. I didn't realize it until recently, but every time I'm watching a movie or TV show, or reading a book or comic book, and somebody goes underwater, I'm waiting for the swordfish -- and vaguely disappointed when it doesn't appear.

And, yes, Waiting for the Swordfish would be an excellent name for a band.

Comment by Randy Jackson on February 12, 2010 at 6:19pm
I think that was something that was a Kanigher trait; he'd find a formula that resonated with his readers, and repeat ad infinitum. From Sgt. Rock and Enemy Ace to Wonder Woman (and I've heard The War That Time Forgot), I've seen the same story told over and over again with slight variations. Sometimes it works, but frequently it becomes tiresome.

Comment by Luke Blanchard on February 13, 2010 at 4:01am
There were many comics aimed at girls in the 60s, just not many superheroine titles.

During the period covered by the volume Wonder Woman came out eight times a year, so it contains just under two and a half years' worth of issues. The next two issues, ##157-58, contained the Egg Fu story, and the second of these also had a story in which fan pressure causes Kanigher to drop Wonder Girl and Wonder Tot in favour of bringing back the Golden Age. The short retro-Golden Age period followed. #157 was also, to judge by the covers, the issue in which WW returned to wearing boots.

Comment by Captain Comics on February 13, 2010 at 1:28pm
You're right about girl comics, Luke, which I was aware of when I wrote this. I should have included the adjective "superhero" and did in my head. Which doesn't count.

As to the WW issues to follow this volume, I alluded to those. There's the short-lived Golden Age experiment, where Kanigher/Andru/Esposito attempted to mimic Marston/Peter for a while, beginning with #159. After that, they quietly moved back to the modern era, with Carmine Infantino often doing the covers, but K/A/E still on the insides. All were gone at least by issue #178, when the "Emma Peel" period began under writer/artist Mike Sekowsky. The next Showcase volume should run through #175, although I imagine they'll stretch it to #177.

One interesting item: I had forgotten that before WW #159, DC experimented with the Golden Age approach: In WW #156, the final story in Showcase Presents: Wonder Woman Vol. 3. Since the official switch occurred three issues later, it may have been a genuine reaction to sales. Don't know that for a fact, though.

Comment by Luke Blanchard on February 13, 2010 at 10:21pm
A few months ago Turning Point pointed out that the Alley Award voters for 1961 named Wonder Woman the "Worst Comic-Book Currently Published". According to Wikipedia it was again voted "Worst Regularly Published Comic" for 1964. I'd guess Kanigher made the changes partly in response to the kinds of things fans were saying. (I'd say this is an example of why this isn't necessarily a good idea, but the next year sales went up.) I've read somewhere that Kanigher spoke negatively about Marvel's comics, so they may also have been his response to Marvel's success.

According to John Jackson Miller's site, the Statements of Ownership reported sales as follows,

Irv Novick did the last five issues of Kanigher's long run, and the last pre-Sekowsky issue was by Bill Finger and Win Mortimer.

So I googled Edith Hamilton...

I see she was a believer in 'the calm lucidity of the Greek mind.'

Speaking as someone who's spent a year in that country, I can believe she never actually visited it until she was 90...

I had great fun amongst the Greeks, but 'calm' and 'lucid' wouldn't be the first adjectives that come to my mind regarding them...