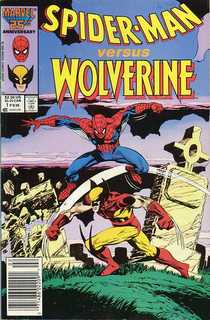 The bulk of the story takes place in Berlin.  As a reference point, this is several years before the Berlin Wall was torn down when Berlin was still on the frontlines of the Cold War.

Spider-Man is in Berlin for a couple of reasons.  As Peter Parker, he’s trying to escape some of the complications of his personal life- particularly his on-again off-again relationship with Mary Jane.  They would get married a year later but, as of this story, they aren’t sure they should be dating despite their strong feelings.  Peter Parker is also trying to make some good money as a photographer, accompanying reporter Ned Leeds on an important story.  The photo angle gives Peter a good excuse to get out of town and a specific reason to be in Berlin.  The ambiguous relationship gives Peter some interesting characterization and depth.

Wolverine’s reason for going to Berlin seems less complicated.  An old contact from his spy days sent him a message and asked him to come.  However, it’s never that simple.  The X-Men were a fractured team at the time, trying to pull themselves back together after the Morlock Mutant Massacre.  Storm asks Wolverine not to go.  Havok argues that Wolverine’s current loyalties to the X-Men are as important as his former ones.  It’s more subtle, but Wolverine is running away from his responsibilities every bit as much as Peter Parker.  He’s using duty as a cover to escape the problems of the X-Men.

That’s strong rationale for both characters to leave New York for Berlin and a surprising level of depth.  It’s a testament to writer James Owsley, who would later become renowned under the pseudonym Christopher Priest.  It’s also a testament to artist Mark Bright.  His use of body language conveyed most of the emotional information while also keeping the reader engaged in the quieter first half of the story.

However, one specific aspect feels dated and that’s the hefty use of inner monologue for narration.  Some pages are very text heavy while some of the best scenes are ones in which Owsley pulls back, allowing the picture to tell the story with a few, pithy or poignant words.  “It’s a good kiss” during an embrace between Peter and MJ is a good example.   A silhouetted Wolverine on the far side of a doorway in a panel with no text boxes is another. 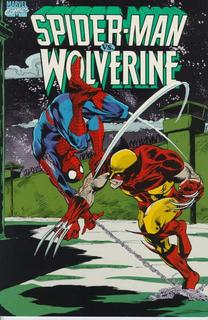 The story picks up once both characters are in Berlin.  Ned Leeds is trying to contact a Cold War covert operative codenamed Charlemagne and Peter Parker is trying to help him.  Wolverine is trying to catch up with his old friend, Charlie.  There’s a nice combination of expected twists and unexpected surprises.  Ned Leeds and Wolverine run afoul of the KGB.  Wolverine and Spider-Man work together.  Charlie and Charlemagne are the same person.  There are other surprises as well but I’m not going to mention them all.

The expected twists are truthfully quite welcome.  It’s nice that the two stories dovetail together so well.  A lot of team-up tales are primarily about one character more than the other and the second character seems shoehorned into the story.  That’s the case in the Wolverine/Nick Fury graphic novel that came out a couple of years later.  It’s a Nick Fury story with Wolverine tacked on.  But Spider-Man versus Wolverine is truly a story for both characters.  They both have a specific reason to be involved- Spider-Man through Ned Leeds and Wolverine through his prior friendship with Charlie.

Even though they both have a reason to be interested in what happens to Charlie, James Owsley continues to write Spider-Man and Wolverine as separate characters.  They may work together but that doesn’t mean they get along.  They have different and sometimes competing interests.  Wolverine fluctuates between reluctantly showing Spider-Man what’s going on to harshly telling him to go back to New York.

The distinction between the two characters becomes the strongest trait in this story.  There is a cliché in team-up tales.  The two characters meet; they fight because of some misunderstanding; they clear the air and then they work together.  It’s the fight-one-another-then-team-up trope that was being mocked at least as early as the 1970s.  Spider-Man versus Wolverine turns that trope upside down.  Spider-Man and Wolverine initially work together.  But their competing interests and values eventually drive them apart.  By the end, Spider-Man is actively trying to stop Wolverine from completing his goals.  When they finally fight, it isn’t because of a misunderstanding.  It’s because of a real and deep disagreement.  They’re not happy to be on opposite sides.  But they’re not about to give in either.  It’s an amazing conflict full of conviction and emotion and ambiguity.  And it’s an incredible display of creativity and craft.

It’s been 25 years since Marvel published Spider-Man versus Wolverine.  In some ways, it’s a little dated with excessive inner monologues and Cold War intrigues.  But in the ways that really count, Spider-Man versus Wolverine is timeless.  It defies convention.  It brings nuance and depth.  It asks interesting questions like “Is it ever appropriate to kill?”  And it’s a spectacularly good superhero story.

This is one of my favorite Marvel one-shots...and I bought it off the spinner rack in 1986.

Comment by Travis Herrick (Modular Mod) on September 9, 2011 at 10:54am
I totally agree what with, Doc on this one. I too bought it off the shelf. I took it with me on a family vacation one time, and I must have read it 5 times.

Comment by Philip Portelli on September 9, 2011 at 12:33pm
In and of itself, it's a great issue that laid the foundation for Peter and Logan's relationship today but it also wrecked the then current storyline in Amazing Spider-Man that caused headaches for years!

Comment by ClarkKent_DC on September 9, 2011 at 1:53pm
How did this book "derail" the Hobgoblin storyline?

Comment by Cavaliere (moderator emeritus) on September 13, 2011 at 12:07am
I first read this in high school, a few years after it originally came out. The scene that haunts Spider-Man in the final pages haunted me for a long time, too. It was the most shocking thing I'd read in a comicbook at that time.

By the way, the oafe.net article you've referenced was written by my co-worker's husband. He runs the OAFE.net website (which stands for Online Action Figure Entertainment), which does thorough reviews of all types of action figures and toys. It also houses a good blog on collecting and ToyFare-like "FigureToons." Please poke around the site when you have a chance.