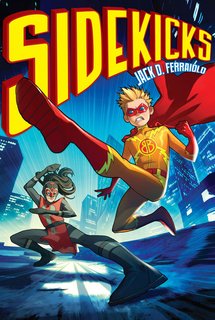 The star is 13-year-old Scott “Bright Boy” Hutchinson, sidekick of the world’s premier (and Batman-esque) superhero, Phantom Justice. Bright Boy is coming of age, and unexpected hormonal surges are causing some predictable problems in his too-tight, and bright yellow, tights. His public embarrassments are compounded when he discovers that his chief foe, Monkeywrench, sidekick of the world’s worst super-villain, Dr. Chaotic, is secretly a girl. A girl who attends his school. A popular girl at said school, whereas he is a dweeby loner, in order to protect his secret identity. Talk about injustice! Now the arch-foes must work together to protect each other’s secret, as well as their own, despite the almost inevitable result of two very healthy, very attractive, very athletic teenagers being forced to spend a lot of time alone together.

What do Phantom Justice and Dr. Chaotic think of the situation? It turns out they have secrets of their own, which complicate matters even further. That is actually unfortunate, in that the plot shares a number of elements with a comic-book miniseries titled Brat Pack, published by King Hell in 1990. But there are only so many ideas in the world, and Sidekicks develops this familiar premise in a unique way that is sure to amuse its target market, young adults. Aside from some stiff expository dialogue on occasion – not the deliberately pompous superhero speeches, but the “real” conversations – Sidekicks is a joy ride in tights, using the conventions of superhero comics to tell a story we can all relate to, regardless of age.

* Nobody does a better job of collected editions than Dark Horse, and the latest evidence is Hellboy Library Volume 4 ($49.99). I’ve already bragged on the first three volumes, part of a series collecting all Hellboy stories chronologically in beautiful oversize (roughly 9 ¼ x 12 ½ inches) hardbacks.

This is the first volume to contain Hellboy stories not drawn by the series writer and creator, Mike Mignola, but as both he and editor Scott Allie assert in forewords, they chose Mignola’s replacements carefully and successfully. The 72-page “The Crooked Man” is an incredibly creepy story adapted from Southern U.S. folklore and drawn by the legendary Richard Corben. A 19-page vampire story set in Prague is limned by the extraordinary P. Craig Russell. No complaints there! Plus, there’s plenty of Mignola himself – not only Hellboy tales, but also some obscure but gorgeous stories he crafted for various Dark Horse projects that have never been reprinted before. That, plus sketches and commentary, are some of the advantages a book like this has over the original issues.

* Irishman Garth Ennis has proved himself a master at telling World War II stories, which he does for Dynamite Entertainment as standalone miniseries under the umbrella title “Battlefields,” which are then collected in groups of three in hardback. My wife and I both devoured the first collection, and Battlefields Volume Two ($29.99) may be even better.

This volume includes “Motherland,” a sequel to “The Night Witches,” about a Soviet combat aviatrix; “Happy Valley,” concerning the short lives and camaraderie of British bomber pilots; and “The Firefly and Her Majesty,” featuring a cat-and-mouse match between a Prussian commander of a King Tiger tank and Ennis’s British Sgt. Stiles, equipped in this story with a modified “Firefly” tank instead of a Churchill – but still just as irritable (and his Northumberland accent is still just as impenetrable to friend and foe alike).

As usual, Ennis’s stories shed light on little-known corners of that enormous conflict, and are more about people, emotions and consequences, rather than the patriotic jingoism and invincible, wisecracking Allied soldiers one usually finds in war comics. If it can be said that stories can make you cheer through your tears, it is these.

* Dark Horse has another winner with Flash Gordon Comic Book Archives Volume 4 ($49.99), if only in comparison to previous volumes, which were pretty mediocre. This one collects the Gordon comic books published by Gold Key (1978-80), and are the best so far. One reason is continuity; events have consequences issue to issue. Another reason is girlfriend Dale Arden finally throwing a few punches and occasionally coming to Gordon’s rescue, instead of her usual, tiresome role as Helpless Hostage.

4. "Flash Gordon Comic Book Archives Volume 4" reprints stories about the character published by Gold Key, which are a level above those published earlier by Dell, King Features and Charlton, which were reprinted in volumes 1-3. Courtesy Dark Horse