I doubt very many of us have wondered what it was like to grow up as a little girl in Communist Poland, but after Marzi: A Memoir (DC/Vertigo, $17.99), I doubt many of us will ever forget it. 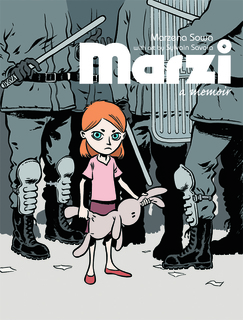 Marzi is written by Marzena Sowa as an account, as she remembers it, of her coming of age in the 1980s behind the Iron Curtain. That alone is fascinating enough – clearly, life under Communism is and was an experience completely alien to our own. But Sowa also completely captures the perspective of a child, one universal to us all. That viewpoint is held with marvelous consistency throughout, grounding the reader in the shared, while experiencing the unique.

Reading Marzi, one is immediately struck by its similarities to Persepolis, a similar tale of another little girl growing up under a repressive regime (Iran). In addition, both Marzi artist Sylvain Savoia and Persepolis creator Marjane Satrapi use a fluid, cartoony style, which serves not only to invite the reader with its gentle charm, but also to serve as a counterpoint to the harsh, serious world in which the protagonists live.

But there are strong differences as well. Persepolis, for example, gives us enough of the adult perspective that we understand both the little girl and the forces acting on her. But Marzi eschews the latter almost entirely, allowing us only what she herself witnessed, and how she understood it.

That could be a handicap, except that Marzi differs from Persepolis in another way: length. Marzi is a long read, and necessarily so. It’s the accretion of detail that allows us to understand Marzi’s world in ways that she herself didn’t understand until she was an adult.

And what a world it is. From the first scene, when her father wrangles a carp on the black market, we understand what a colorless, strange place she inhabits. The fish is a big, big deal, not something Marzi’s family can afford or even find most of the time. But the family is splurging for a celebration – one assumes Christmas, which is not recognized in the officially atheist state – and the carp is kept alive in the bathtub as a pet, until the big day … when they kill it and eat it.

This is Marzi’s Bizarro world, and we see it through her eyes.  It’s the skill of the adult Marzena that brings that to us, capturing both the childlike wonder and earnest confusion of those early years. It’s a mesmerizing read. 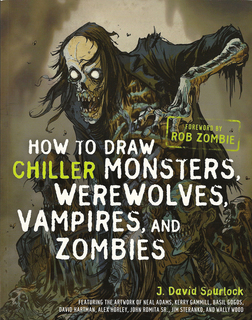 Occasionally I receive an art-instruction book for review, but I don’t feel I have the expertise to review those, so I usually refrain. However, I’m willing to make an exception for Watson-Guptill’s How to Draw Chiller Monsters, Werewolves, Vampires, and Zombies ($19.99).

I took enough art classes in college to know that Chiller is pretty much Drawing 101, with chapters on blocking out figures, perspective, contrast, texture, lighting, composition and so forth. Any of a dozen books on my shelf do the same.

However, Chiller has two other things going for it that the others don’t.

The other advantage Chiller has over the competition is the author, J. David Spurlock. If that name sounds familiar, it’s because Spurlock is founder of Vanguard Publications, which specializes in art books from, and history books about, famous comic-book artists. In the course of that job, Spurlock has forged relationships with many of the biggest names in the field over the decades, and those artists (or their estates) have contributed work as examples to emulate.

So, you know, it’s nice to be shown how to draw a vampire by Spurlock, who is an art teacher and illustrator in his own right. But it’s even cooler to be shown how to draw a Gene “Tomb of Dracula” Colan vampire! Other big names found in the book include Dan Adkins, Jack Davis, Steve Ditko, Frank Frazetta, Basil Gogos, Kerry Gammill, Gray Morrow, Jim Steranko, Angelo Torres, Al Williamson, Wally Wood and Bernie Wrightson. Toss in the foreword by heavy-metal musician and horror movie director Rob Zombie, and Chiller is a pretty comprehensive package.

1. Marzi: A Memoir is an autobiographical graphic novel about growing up in Communist Poland. Courtesy DC Entertainment.

2. How to Draw Chiller Monsters, Werewolves, Vampires, and Zombies includes art for an all-star cast of comic-book artists. Courtesy Watson-Guptill.