So said my wife and sidekick, the vivacious Video Vixen, about Mouse Guard Vol. 2: Winter 1152 (Archaia, $24.95). And, yes, it is set in a quasi-medieval fantasy world with its own history, languages, races/species and so forth. And it stars mice instead of hobbits; that much of the analogy is accurate.

But Mouse Guard is its own (ahem) animal, about a group of very well-written rodents who are the protective Mouseketeers (sorry) of their low-tech civilization, despite being very small in a world of large predators, outsized weather and internal betrayal. Each of the mice has a very specific personality, which the reader comes to know and enjoy.

Writer David Petersen is also the artist, and is equally conscientious at the drawing board. His art is beautifully detailed and quasi-realistic, with just the right amount of ye ancient faerie tayle quality. Eventually the alert reader will be able to tell the mice apart beyond their clothing and dialogue by visual cues alone, which is saying a lot when all the characters are small and covered in brown fur.

Winter 1152 is the second volume of Mouse Guard, directly following the first which was, duh, Fall 1152. That volume won an Eisner award, and I have no doubt this volume will be in contention for another. 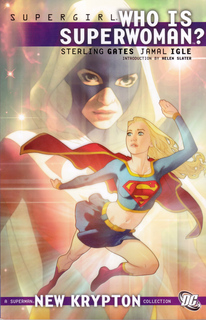 * When the Supergirl concept was revived a few years ago, the character wasn’t very likeable and dressed like a teen hooker. DC Comics has corrected that by growing Kara Zor-El into a very likeable, determined and heroic young lady, about whom many good stories will be written.

However, the most recently collected, Supergirl: Who Is Superwoman? (DC, $17.99), isn’t one of them.
Oh, the Maid of Steel herself is worth cheering for in this collection of Supergirl #34 and #37-42. But it takes place within a larger, year-long storyline currently running in all of DC’s Super-books, including Action, Superman and the 12-issue Superman: World of New Krypton. As such, Superwoman doesn’t read well without knowledge of the other books.

Also, this story is chockablock with really unpleasant, murderous characters, which include Reactron, Codename: Assassin and Metallo, about whom we learn little. Then there’s Gen. Lane, a black-bag military leader who hates all super-people, which is a one-dimensional cliché so familiar I was predicting his dialogue before I read it.

Plus the story opens with an editorial hatchet-job about the Girl of Tomorrow by gossip columnist Cat Grant taking over the entire front page of The Daily Planet, which just chafes my newspaper soul. Legitimate newspapers – which the Planet is supposed to be – simply don’t do things like that. It took me out of the story in a Metropolis second.

Maybe I’m being too harsh, but I like Supergirl and if you haven’t read about her already, my recommendation is to wait for a better story to meet her. 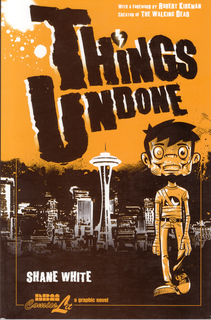 It’s the story of a twentysomething videogame artist as he changes jobs a couple of times, and goes through a couple of girlfriends. In the meantime, he’s turning into a zombie. Don’t worry, it’s just a metaphor for unhappiness, and the other characters don’t notice.

Writer/artist Shane White (North Country) uses a pleasing cartoony style for this tale, wherein the protagonist worries that he loves his girlfriend but might not be in love with her; that nothing is nourishing his soul; that his job isn’t satisfying on a personal or artistic level. He gets therapy (which he apparently doesn’t need) and considers suicide.

Some of you may be saying, “Oh, dude, I can so relate.” And this book is for you. It’s young adult angst, with the over-the-top zombie metaphor.

But, frankly, I’m a little too old to enjoy a story about a self-important adolescent narcissist feeling sorry for himself. Come to think of it, I didn’t enjoy that sort of thing when I was an adolescent. The solution to the protagonist’s problems is pretty obvious to me then and now: Grow up and stop thinking the world revolves around you.
I don’t mean to be harsh, so I’ll reiterate that White is clearly in control of his craft and Things Undone is a professional, attractive coming-of-age type story. Those for whom it’s aimed should enjoy it.

I’m just not that audience, so it’s not my cuppa.

Comment by Lumbering Jack (M'odd-R8-Tr) on December 10, 2009 at 6:40am
I don't read any other Superman title, but I had a pretty easy time piecing together what was going on in Supergirl. Complaints elsewhere about General Lane aside, I really enjoyed this storyline, and it made me eager to read more. Jamal Igle, who did most of the pencilling chores here, is a real standout here. He's getting better and better all the time.
(No spoiler here) The identity of Superwoman was an interesting reveal to me, and I bet it would really intrigue a casual reader or a "Smallville" fan. In fact, I bet a lot of non-comics reading "Smallville" fans would really like this book.
Hmmm, maybe that's not saying much about "Smallville" fans. :)