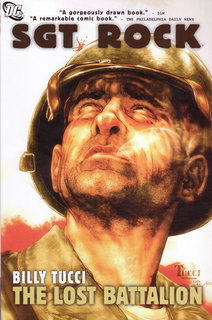 This hardback (DC, $24.99) collects the six-issue miniseries of the same name, written and drawn by Billy Tucci (best known for the female samurai story Shi). And it’s evident from everything that Tucci has said about it in interviews, to the meticulous accuracy of his historical detail, to every line he lays on the page, that this is a story from his heart.

Tucci uses DC’s long-running Sgt. Rock and Easy Company as a vehicle to tell one of the most dramatic – and often overlooked – stories of World War II. In October 1944, elements of the first battalion, 141st infantry, were surrounded by the Wehrmacht. After several failed rescue attempts, the Allies sent in the 442nd – the storied Japanese-American, or “Nisei” – regimental combat team. Despite suffering 50 percent casualties, and despite many of the soldiers having relatives in internment camps back in the U.S., the 442nd doggedly battled through to the 141st during five days of lethal combat.

Not everything works in Lost Battallion. Tucci’s decision to use a cartoonist for the fictional Up Front magazine named William Kilroy (Har! Har!) as the reader’s point of view is an unnecessary structure and distraction, and kind of comes and goes anyway.

However, Tucci deserves credit for not allowing the larger-than-life Rock and his fictional heroes to hog the spotlight from the genuine heroes of those horrific days. Many more traditional writers would fail in that regard.

And there’s absolutely nothing wrong with the gorgeous art. It’s some of the most evocative and inspired I’ve ever seen in a graphic novel.

So, by all means, treat yourself to The Lost Battallion. It’s clearly a gift from Tucci’s heart to yours. 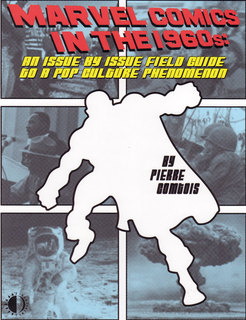 * Marvel Comics in the 1960s: An Issue by Issue Field Guide to a Pop Culture Phenomenon (TwoMorrows, $27.95) is a mouthful, but it’s got a lot to say and has a lot fun saying it.

Author Pierre Comtois breaks down the “Marvel Age of Comics” in the 1960s into four categories: The Formative Years, Years of Consolidation, Grandiose Years, and the Twilight years. Unfortunately, the fourth category will be a second volume, so it’s not included here. Which is OK; life isn’t split into categories, and the two volumes should tell the whole story.

And what a story it is! If you don’t know about Marvel’s wild ride in the 1960s you’re in for a treat. It’s the story of Stan Lee, Jack Kirby, Steve Ditko and others at tiny Marvel Comics creating Spider-Man, Fantastic Four, X-Men, Hulk and other legendary characters, then rising in sales and popularity to eventually knock off mighty DC Comics as the country’s biggest comics publisher.

But this isn’t a straightforward history; Comtois calls this a “field guide,” which should allow readers to open to any page to check info or just read about a given book. It’s a nice idea, but it results in a lot more duplication than I would like. And there’s not much new here for those already familiar with the tale.

But Comtois is clearly taken with his subject, and his sheer enthusiasm is infectious. Whether new fan or old, it’s a fun romp down memory lane. * Speaking of Stan Lee, it’s been said that his talent is what separated the horror anthology Menace from its many brethren at Atlas Comics in 1953-54.

Given the cascade of reprints coming out today, we can actually verify that ourselves, by comparing Marvel Masterworks: Atlas Era Menace (Marvel, $59.99) to other Atlas Era reprints. And, sure enough, the Lee-penned stories in the 11 issues of Menace (the title, like many, was throttled by the 1954 Comics Code) are a step above similar material in “Journey Into Mystery,” “Strange Tales” and other Atlas titles. It also helps that Lee – who was the editor-in-chief at the publisher – helped himself to the cream of the Atlas bullpen, especially artists Bill Everett, Russ Heath, Joe Maneely, John Romita and Joe Sinnott.

Lee was evidently stretching with this title, perhaps hoping to compete toe to toe with EC Comics, famous even today for the quality of titles like Tales from the Crypt, Weird Science, Mad, Frontline Combat and Shock Suspenstories. I don’t think Lee & Co. managed to reach EC’s level consistently, but Menace has enough peaks to make it a worthwhile read.

Comment by ClarkKent_DC on December 3, 2009 at 4:24pm
I wanted to like The Lost Battalion -- hey, I'm always up for a good Sgt. Rock story -- but what was wrong with it was that it was a history lesson disguised as a Sgt. Rock story. Tucci worked hard on it, and the art is good looking, but the blend of DC war comic and sober true-life tale of wartime heroism under oppressively miserable circumstances didn't quite work.

Comment by Jeff of Earth-J on December 3, 2009 at 6:28pm
I haven't read Menace yet, but your review of Turok has led me (in a round about way) to reading Jesse Marsh's Tarzan. Marsh's art is kind of bland at first blush, but it has subtleties not found in many of his contemporaries’ work. (I'm referring to comic book artists, of course; he's no Burne Hogarth or Hal Foster anyway you look at it!)