Aug. 25, 2009 -- I love Vikings. And the existence of Northlanders, a series from DC’s mature-reader Vertigo line, tells me I’m not alone.

Northlanders doesn’t have a continuing storyline or characters. It’s just a series of disparate stories set during the Viking era, all written by Brian Wood (DMZ) and each drawn by a different artist.

The first Northlanders story was an eight-parter called “Sven the Returned,” about a fellow who returns from the Varangian Guard in Constantinople to his homeland in the Orkneys in 980, which has been usurped by his uncle. (Violence ensues.) The second was a two-parter called “Lindisfarne,” the story of a young lad who sees opportunity instead of terror in the famous 793 raid that historians peg as the beginning of the Viking era. They were both absorbing, but I’m not here to review them.

Instead, let me recommend the third story, “The Cross and the Hammer,” which has been collected in trade paperback. It’s about Magnus, a Celtic resistance fighter (against the Hiberno-Norse king of Dublin, Sigtrygg Silkbeard) in the important months leading up to the Battle of Clontarf in 1014. Magnus, accompanied by his young daughter, busies himself slaying the “occupiers” of Norse descent, while the king’s brother (probably invented for this story) uses primitive CSI techniques to track him down.

One of the reasons I like Vikings so much, I guess, is the sense of fatalism that infuses their mythology, their culture and, eventually, their history. Cold and hard like the land from which they rose, the Vikings never had a grand, nationalistic scheme to conquer or occupy – possibly because each band was pretty independent, but also because they believed nothing lasted forever (even their gods were fated to die). The best a Viking could hope for was to be killed with a sword in his hand, so that his soul would go to Valhalla, rather than Hel or Muspelheim. Even their afterlife was bleak!

“The Cross and the Hammer” – a reference to Christianity vs. the worship of Thor – is a Viking story. So with that in mind, there are only a few ways one can imagine Magnus’s story ending, none of them happy – but when it does, it is still shocking. Northlanders: The Cross and the Hammer ($14.99): It’s not what you think it is, but it is recommended.

* We live in dangerous times – but in Geronimo Stilton books, it’s time that’s in danger! 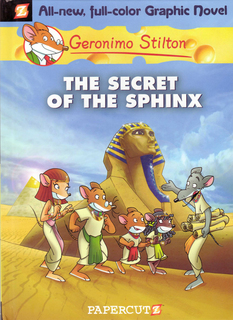 Stilton is the hero of a series of children’s books in Italy, about a mild-mannered newspaper editor mouse (of New Mouse City’s Rodent Gazette) who must travel through time to stop the Pirate Cats from changing the past.

Sound like fun? Since the Stilton books have sold more than 30 million copies worldwide, a lot of people think so.

And it’s more than fun. Like the grand quests that Carl Barks would write and draw for Scrooge McDuck and the Disney ducks, Stilton’s adventures are educational as well. And I don’t mention Barks casually – because Stilton is now available in graphic novels as well as prose, just like the Disney ducks, and they hold up well in comparison.

That’s pretty high praise, I know. But take a peek at Papercutz’s first two offerings in a proposed series: Geronimo Stilton: The Secret of the Sphinx and Geronimo Stilton: The Discovery of America (both $9.95). These are grand time-travel adventures with sympathetic, heroic mice who just happen to give history lessons on ancient Egypt and Christopher Columbus.

But I don’t need to say any more, because Papercutz has an animated trailer that does it better: http://www.youtube.com/watch?v=6HAwzNfPBoE

* I never collected Boris Karloff Tales of Mystery when it was published by Gold Key from 1962 to 1980. Thanks to Dark Horse, I’ve now read the first four issues in hardback ($49.95).

Turns out it was a fairly typical suspense book of the period, an anthology of bloodless – thanks to the Comics Code – supernatural stories with twist endings, where bad guys predictably got their comeuppance.

That’s not to say I didn’t enjoy it; I find this well-traveled road mildly diverting and vaguely comforting, in an old-slippers kind of way. And the stories are thoroughly professional, with the credits reading like a who’s who of early 1960s comics pros, including Don Heck and Mike Sekowsky.

I’m not sure even I’m prepared to buy the entire run of Boris Karloff should Dark Horse reprint it, but I am looking forward to volume two.

Comment by Jeff of Earth-J on August 27, 2009 at 12:33pm
I read Dark Horse's Boris Karloff collection and I felt about it pretty much the same as you did. I found it interesting from an historical perspective between the eras a EC comics and Creepy magazine, yet far different than the similar code-approved fare Marvel and DC were releasing at the time. Dark Horse has been really good about releasing non-big two collections from all ages, and their archive line is a good alternative to Marvel's and DC's.

Comment by Mark Sullivan (Vertiginous Mod) on August 27, 2009 at 1:59pm
I haven't read that second Northlanders collection yet (I've got a copy and should get to it soon). But I liked the first collection, and I'm glad you liked it too. When we discussed it on the old message board some Legionnaires found the language too crude.

Comment by Travis Herrick (Modular Mod) on August 27, 2009 at 2:57pm
I am in the same boat as Mark. I read the first one, and I have the second waiting to be read. The language wasn't necessarily too crude. It was a bit jarring though, and it took me a while to get used to. I ended up liking it though, and was glad it avoided the whole "thou", "thee" and "youse guys"

Comment by Captain Comics on August 27, 2009 at 2:58pm
I'm not familiar with the Northlanders trades. There's no number on the spine of The Cross and the Hammer. Was "Sven the Returned" collected into trade? Was "Lindisfarne"?

Comment by Captain Comics on August 27, 2009 at 3:05pm
As to language, the f-bombs and so forth didn't bother me at all. I'm sure the Danes, Gaels, Celts, Norse, etc. of the time, during a time of religious transition, weren't shy about cursing! I doubt they used specifically the same terms we do, but they used something like them, so on a subconscious level I figure the author is "translating" for us. The author is translating in every other respect -- god knows what they were speaking in the Orkneys 1,000 years ago, but it sure as heck wasn't modern-day American English -- so why not the cursing? It's all of a piece to me, as they are telling us a story, and showing us what these people were like and how they talked, in lingo we understand. I can't see how they'd go about it any other way and manage any verisimilitude.

Comment by Mark Sullivan (Vertiginous Mod) on August 27, 2009 at 3:23pm
"Sven the Returned" was the first trade, which was bargain priced at $10, as Vertigo has been doing lately. They skipped over "Lindisfarne" when they assembled the second trade. If it doesn't make it into the third one I'll have to hunt down the individual issues. And I felt the same way about the cursing as you, Cap. I thought it made sense in context.

Comment by Captain Comics on August 27, 2009 at 3:27pm
"Lindisfarne" was only two issues, and the story after "The Cross and the Hammer" --
"The Art of Single Combat" -- was done in one. I imagine they'll probably do shorties between the long stories, and eventually gather them all up as "Tales of the Northlanders" or something.

I'm surprised "Sven" was so cheap. It was eight issues in the regular title, which is a lot for a trade.

Comment by Mark Sullivan (Vertiginous Mod) on August 27, 2009 at 5:22pm
Yeah, they've tended to go for $10 no matter how many issues it is. But that Northlanders one was the largest so far. The first Madam Xanadu is also eight issues, but they charged $13 for it. Still cheaper than usual.

Comment by Figserello on August 28, 2009 at 8:23am
There should be more books about Celtic resistance fighters. Asterix and Slaine shouldn't have to do it all!