Hal Jordan was introduced in1959, at the beginning of the space age. He was allegedly based on Chuck Yeager, the legendary test pilot, and everything about him was sleek, cool and hip. He had essentially Aladdin’s lamp on his finger, which could do anything he imagined (except affect things colored yellow) – which was really appealing to youngsters like me, who could imagine quite a lot (especially numerous ways to get around that yellow thing). He was chosen by the Green Lantern Corps for being born without fear, had a really cool job (test pilot) and dated his boss, Carol Ferris.

This guy was just a stud. I may have felt like Peter Parker when I was growing up, but it was Hal Jordan I wanted to grow up to be.

And Green Lantern just got bigger and cooler with every issue. Gradually we learned more about the other alien Green Lanterns, and the little blue immortals in the red dresses who ran the show, the Guardians of Oa. We learned there were 3,600 Green Lanterns in all, each patrolling a wedge-shaped (but potentially infinite) sector of space radiating from Oa, which was in the center of the universe. Two more “back-up” Lanterns from Earth were introduced, one an African-American architect named John Stewart, who was featured in the Justice League cartoon.

Eventually we learned that there had been another Green Lantern back in the 1940s, who bore no relation to the current one except the name. That character was invented in 1940, when creator Martin Nodell was taking a commuter train, and noticed that red lanterns meant “danger” while green lanterns meant “everything’s safe.” Everything’s safe? Bingo! And so a hero was born, who had a green ring that was literally magic. Naturally, Hal Jordan got to team up with his older namesake now and then (who is still around, and still not related to the Green Lantern Corps). But something happened to the Emerald Warrior. Like in the 1940s, the new guy’s popularity fell off. Maybe he was simply too powerful to plausibly challenge, or there were so many Lanterns he stopped being unique. Maybe his life was too good to be interesting. Maybe that “yellow weakness” was too ridiculous, or aging fans began to realize that being “born without fear” makes you a psychopath, or a short-lived idiot. Regardless, Green Lantern was canceled in 1972, and made fitful restarts over the next few decades. DC tried everything to make the title interesting, like breaking up Hal and Carol (repeatedly). They even turned Jordan into an actual psychopath in 1994, one who murdered a bunch of fellow Lanterns, and replaced him with a young slacker as “the last Green Lantern.” 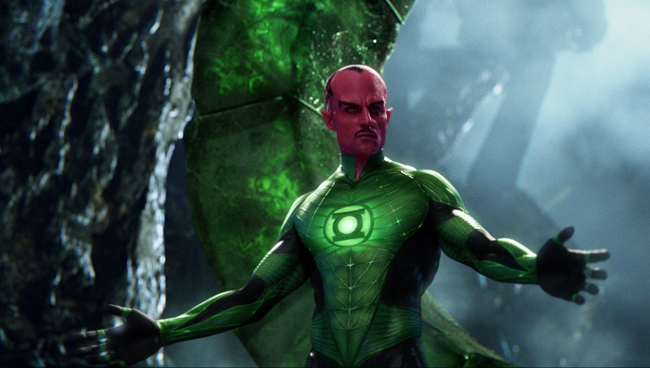 Fortunately, none of that lasted. A young writer named Geoff Johns – now the Chief Creative Officer at DC – virtually rebuilt the franchise. He managed to explain away that old, stupid yellow weakness and Jordan’s trip on the crazy train by blaming an entity called Parallax, who embodies fear and powers yellow rings. He also invented an entity called Ion who embodies will and powers the green, and then blue, orange, purple, red and violet entities that power five more corps of ring-bearers, all of which together comprise not just the rainbow, but the “emotional spectrum” as well. Johns re-wrote “born without fear” into something more heroic: the “ability to overcome great fear.” He also introduced the creepy idea that rings fly off to find new hosts when their bearer dies – but that also means that it wasn’t the dying Green Lantern of Sector 2814 that chose Hal Jordan: It was the ring itself.

All of this is will be fun to know if you plan to see Green Lantern. The movie’s Big Bad is Parallax, a relatively new creation, along with the huge-headed Hector Hammond, a character from the 1960s (that Johns made nastier). You’ll see a mix of Green Lanterns old and new, from the first one Jordan met, Tomar-Re, to his drill sergeant, Kilowog, to the Green Lantern who went rogue, Sinestro.

And you’ll know that Hal Jordan, played by Ryan Reynolds, deserves his ring – because it will choose him. And after seeing the movie, maybe you’ll want to grow up to be Hal Jordan, too.

3D movies are by definition dark and gloomy affairs.  Only half the amount of light goes to each eyeball, so naturally you get a lot less brightness.

Maybe when they do 'Blackest Night' the darkness and gloom will be efficacious, but this is supposed to be a light, bright colourful space adventure.

After seeing Thor in 3D, and paying through the nose for the privilage, I won't be in a hurry to see another movie in 3D.

Avatar was great in 3D but it was made only to be seen in 3D, and the gloomy forests were part of the whole set-up.  Cameron worked the gloom into his whole vision.

I read three reviews on Green Lantern, all were hardly complimentary. And they focused on the one thing I knew they would. That Ryan Reynolds doesn't have the depth to play a convincing Hal Jordan as anything other than Van Wilder. He apparently tried to mimic Robert Downey Jr. but he does not have his range.

That said, I hope to see it Monday with an open mind. If anyone can recommend 2-D or 3-D, that would be appreciated!

I don't think I've ever seen him in a movie. I skipped the "Wolverine" flick.

I remember a friend's comment about Reynolds' breakup with Scarlett Johansson: "Too much beauty in one household. They probably fought over the mirror."

You're right, George -- I should have said most of the movie audience, or most comics readers, not most people are under 40.

And I don't know anything about Ryan Reynolds. I think the only thing I've seen him in was X-Men Origins: Wolverine, and I didn't come away with much of an impression.

Another mystery: Why is  bland, boring Ryan "Ken Doll" Reynolds a movie star? He seems better suited to play the second lead on a TV series.

Heidi MacDonald -- alleged comics fan for 35 years -- tries to figure out who this Green Lantern dude is, and why he's popular.

It sounds like I'm making fun of Heidi (and I am, sort of), but I can understand how she feels. It took me years -- nay, decades -- to figure out why the Legion of Super-Heroes were such fan favorites. They never appealed to me. Then I realized the Legion was a metaphor for comics fandom itself. Which may explain why the series was always more popular with hardcore fans and collectors than with casual readers (back when comics had casual readers).

Comment by Captain Comics on June 17, 2011 at 5:29pm
That's OK. With all the revamps, reboots and retcons, I get confused all the time. For example who is the current chipmunk-looking Green Lantern? The original -- Ch'p -- was killed in Green Lantern: Mosaic. (He was run over by a yellow garbage truck.) But is he back? Or is this a different one?

Travis Herrick (Modular Mod) replied to Alan M.'s discussion So, What Are You Reading These Days? (besides comics)
"Currently reading Jack of Spies by David Downing. This takes place before WWI, and Jack McColl is a…"
3 hours ago

Captain Comics replied to Captain Comics's discussion Bond #5: 'From Russia, with Love'
"I'm so confused! I made sure to watch Dr. No, From Russia With…"
8 hours ago

Jeff of Earth-J replied to Captain Comics's discussion Bond #5: 'From Russia, with Love'
""We haven't gotten there yet!" I'm so confused! I made sure to watch Dr. No,…"
11 hours ago

Captain Comics replied to Captain Comics's discussion Bond #5: 'From Russia, with Love'
"You might find this interesting: I knew all of that except the part that it was SMERSH that were…"
11 hours ago

Lee Houston, Junior replied to Steve W's discussion A Cover a Day
"Hopefully this situation will turn out well in the end... (Image courtesy of the Grand Comics…"
12 hours ago