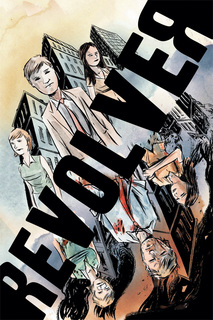 As is almost typical in such stories, like “Mirror, Mirror” in Star Trek or the Justice League stories with the Crime Syndicate, the second world is awful. In Revolver, ordinary office schmoe Sam wakes up in an alternate universe where Seattle has been nuked with a dirty bomb, a strain of avian flu is killing millions and official authority has collapsed. Then the next day he awakens back in his old world, where he hates his job and has an irritating, shallow girl friend. He “revolves” between the two worlds – a process never really explained – a situation which is complicated when he meets another Revolver who uses the second world as a violent playpen.

The interesting twist is that Sam might prefer the “bad” world. Sure, he’s safe and comfortable in the “good” world, but the other one gives him purpose and direction. Further, he’s happier in love, and confidently handles crises with information he learns at his leisure in the good world. This question is conveyed with deft characterization by writer/artist Matt Kindt (Super Spy), and gradually grows in importance to a faux climax which leaves the true denouement to your imagination.

However, while Kindt’s writing is sharp, his art struck me as less so. It’s so sketchy and unfinished that occasionally I couldn’t tell male from female at a glance, much less this person from that, which is something of a drawback in a character-driven piece. At least the two worlds are distinct – the second one completely trashed out – so the reader is instantly aware of the where if not always the who.

Still, it’s all of a piece and one must accept the bad with the good. And there’s enough good in Revolver to both entertain and provide food for thought. 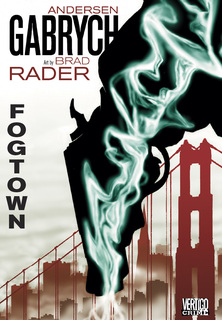 At first Fogtown is all too familiar, set in 1953 San Francisco and starring Frank Grissel, a prototypical hard-boiled detective. But a missing-persons case spins out of control, connecting to murdered prostitutes and the city’s underground vice scene. As revelation follows revelation, Frank discovers hidden layers to his city – which in return reveals hidden layers in our principal characters, not all of whom are what they seem.

While Fogtown follows the rigid formula of the noir detective thriller, it also slyly subverts that formula. For while Fogtown contains the usual suspects – hard-boiled detective, loyal gal Friday, shady cops, etc. – it also treats them as individuals who do not fit neatly into their pigeonholes, despite their desperate efforts to do so. More than that I can’t say without major spoilage, but Fogtown is a reminder that the “good old days” weren’t all that good, especially for those who didn’t fit into the straitjacketed social roles of the unforgivingly comformist ‘50s. 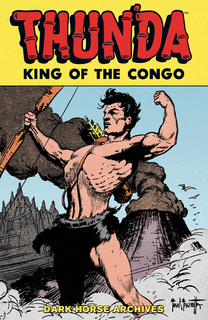 Speaking of unfortunate opinions of the past, reprints of Tarzan and Tarzan knock-offs are coming fast and furious these days, along with all kinds of other reprints from the 1940s and ‘50s. But now that I’m getting a steady diet of such fare, the ugly racism at the heart of the white jungle king genre is getting pretty nauseating.

What prompted this revelation is Thun’Da: King of the Congo (Dark Horse, $49.99) a Tarzan swipe whose short-lived series’ claim to fame is the first issue, which is the only comic book drawn entirely by Frank Frazetta, famous for those terrific Conan paperback covers in the 1970s. Thun’Da is occasionally set in “Dawn Valley,” complete with cavemen and dinosaurs, which is fun. But when he and girl friend are playing Tarzan in the regular Congo (jarringly referred to as Belgian territory), those helpless, child-like Africans with their pidgin English are pretty wince-worthy.

Still: Dinosaurs. Plus, the bulk of the stories are drawn by veteran Bob Powell, so it’s not too shabby. And call me cold-blooded, but I like it that Thun’Da doesn’t pussy-foot around like other jungle characters. When Thun’Da gets the upper hand on a villain, he offs him mercilessly. This is what’s meant by the phrase “law of the jungle,” and it just makes sense.

This material is worth reprinting and preserving, if for no other reason than to remind us of “the way we were” – and how far we’ve come.
Contact Andrew A. Smith of the Memphis Commercial Appeal at capncomics@aol.com.

Comment by The Baron on August 12, 2010 at 2:24pm
Seconds of exhaustive indicate that Thun’Da first appeared in 1952, so that would've fallen within the Belgian colonial period.

Comment by Captain Comics on August 12, 2010 at 6:21pm
Baron, I'm well aware that Congo was once the "Belgian Congo;' in fact, it's fairly infamous as one of the most cruelly abused African colonies. At least that's what I learned in school, after the Belgians had withdrawn. But it was just weird to have Thun'Da use the reference, because why would he care? Especially in the scene, which was where a French Foreign Legion officer was trying to arrest him. He said, "You have no authority here. You are French, and this is Belgian territory." Note that for a second there he lost his own pidgin English and was suddenly talking like a lawyer. But wouldn't he have said "this is MY territory"? It was always "my jungle" and "my kingdom" and so forth up to that point. It was just weird -- or telling that at the heart of it, there was colonial sentiments.

As a contrast, in another story where the narrator refers to the "bustling port of Leopoldville," I didn't bat an eye. I know that's Kinshasa now, and was Leopoldville until the early 1960s. No biggie. It was just Thun'Da referring to "his" jungle as "Belgian territory" that was disconcerting.

I didn't have room to say all that in the column, so thanks for giving me the excuse to do it here!

Comment by Captain Comics on August 12, 2010 at 6:24pm
Also, for some reason, the name of the book suggested a song to me, and I began to drive my wife crazy by singing (in a conga-line beat):

And so forth. I think I was flirting with divorce. But Congo is so easy to rhyme with!

Comment by Travis Herrick (Modular Mod) on August 13, 2010 at 10:30am
I think Fantagraphics put out a reprint back in the '80s of the Frank Frazetta Thun'Da comic. I picked it up at a convention a few years back. I thought it was pretty average myself. At first I thought our hero was slowly devolving as his speech got worse, and then suddenly he would be speaking normal again, so I didn't get it.

For those who care it was written by Gardner Fox

Comment by The Baron on August 13, 2010 at 10:30am
Well, Thun'Da has to get some use from that paralegal degree he got from taking that correspondence course.