Robin's dead. So what else is new?

Yes, it’s true what you’ve read all over the Internet: Robin is dead.  But there are a lot of reasons not to get too upset about it, and at least one good reason to be upbeat. 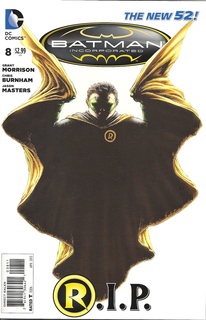 For one thing, this isn’t THE Robin with which most people are familiar. That would be Dick Grayson, the first Boy Wonder, who was introduced in 1940 – only a year after Batman himself debuted. Grayson was from a family of circus aerialists who watched in horror as his parents were murdered, much like a certain Dark Knight, who took Grayson under his scalloped cape as both Bruce Wayne’s ward and Batman’s partner.

Grayson remained as Robin until 1984, when he “graduated” to his own superhero persona, Nightwing, and currently has an ongoing title by that name. But his longevity isn’t the only reason for his fame; Grayson has also been the Robin in virtually all other media in which his mentor has appeared. Grayson was Robin in the two 1940s Batman movie serials, the 1940s Batman comic strip, the 1960s Batman TV show and movie, the 1990s movies Batman Forever and Batman and Robin, plus most Bat-cartoons, from Super Friends to Batman: The Animated Series to Batman: Brave and Bold.

Meanwhile, four lesser-known Robins have worn the yellow cape in the comics. They consist of (in order) tough street kid Jason Todd, pre-adolescent genius Tim Drake, supervillain’s daughter Stephanie Brown and the latest one, Damian Wayne, Batman’s illegitimate son via villainess Talia al Ghul. Of course, there have been countless other Robins from alternate Earths, parallel universes, time-travel stories and the like. (Hey! It’s comics!) But these five are the “real” Robins recognized in current Bat-stories.

And two of those have already died, as well – only to be resurrected!

Jason “Robin II” Todd was bludgeoned  with a crowbar by The Joker and then blown to smithereens in 1988, when DC Comics famously left his fate up to the fans, who narrowly voted on a 1-900 telephone number for Robin to snuff it. Fortunately – sort of – he was resurrected later in circumstances too complicated and ludicrous to explain here (the phrases “Superboy-Prime’s fists” and “temporal ripples” are involved). He now calls himself The Red Hood and blames Batman for his temporary membership in the choir invisible.

The next Boy Wonder to shuffle off the mortal coil was actually a Girl Wonder, the aforementioned Stephanie Brown. She was the daughter of Z-list supervillain the Cluemaster, who became the masked Spoiler to, er, spoil her father’s crimes. Eventually her hobby came to the attention of the Bat-family, especially Tim “Robin III” Drake, who became her boyfriend. Then she, too, became a Robin – only to fail in the role in circumstances too ham-handed to be taken seriously, kicked out of the Batcave, and then beaten to death by supervillain gangster Black Mask. But, surprise, her death didn’t really happen, and her habit of continuing to draw breath was hidden from Batman – the “World’s Greatest Detective” – in a story so stupid that “Hey! It’s comics!” doesn’t excuse it. But despite being resurrected some years ago, Stephanie has yet to appear in DC’s current continuity, the one that began in 2011 as “The New 52.” Some fans fear the worst, but I’m not worried; she was far too hot in the Robin costume for her not to suit up again.

So now we have Bruce’s actual, no-kidding, full-blooded son, Damian Wayne, surreptitiously birthed and raised by Talia al Ghul (daughter of Ra’s) and the League of Assassins as a stone killer, whom Batman adopts at age 10 and tries to steer away from the Dark Side by making him Robin V. This all began when famed writer Grant Morrison took over Batman in 2006, in a story called "Batman and Son," and from there Morrison wrote a six-year epic with an underlying theme and surprisingly plausible literary pretensions. Morrison explained all that and more in an essay he wrote for DC’s “The Source” blog, plugging the Death-of-Damian story (www.dccomics.com/blog), and announcing his own retirement from Bat-stories.

“[The] underlying theme of damaged and ruined families was nowhere more in evidence than in the creation of Damian, the first ‘Son of Batman’ to be acknowledged in the canon,” Morrison wrote. “In many ways this has been Damian’s story as much as it has been the story of Bruce Wayne, and it’s a story that had its end planned a long time ago – for what son could ever hope to replace a father like Batman, who never dies?”

So now Damian has kicked the Bat-bucket, as of Batman Incorporated #8, which went on sale Feb. 27. Killed by an artificially aged clone of himself named The Heretic on his mother’s orders (Hey! It’s comics!), the next few months will see the impact on Batman and his family (Nightwing, the other Robins, Batgirl, Alfred, etc.). Then Morrison will take his leave, having created, developed and killed Damian as the central spine of his Bat-epic.

In fact, Morrison told the Washington Post (http://www.nypost.com/p/news/national/holy_hit_job_robin_eats_it_kZ...) that the arc he planned for the character – from cynical killer to selfless hero – was complete. “What we did was turn this little monster into a superhero,” he told the Post. “He’s a little brat, but he’s a super-brat.”

Which, if you’ve been paying attention, is unlikely to be the end of the story. Morrison has said all he has to say with Damian, but he’ll be followed by an endless parade of Bat-writers in the future, some of whom are bound to have a thought or two about Damian. Which means it’s unlikely “Son of Batman” will stay deceased.

Which is fine. Hey! It’s comics! For purists, the Morrison run can stand alone conceptually – and doubtless will physically as well, in some sort of deluxe collection – and for the rest of us, it was a fun ride that will undoubtedly crank up again, with Damian rising from the grave at some point in the unspecified future.

Let’s hope our Bat-writer of that future is as skilled as Morrison, and gives us a Damian story as epic as the one we’ve got. That part is unlikely, but hope – like comic-book characters – springs eternal.

So Robin is dead. But, hey! It’s comics! Where nobody’s dead forever.

Contact Captain Comics at capncomics@aol.com, and for more comics news, reviews and interviews go to his website, captaincomics.ning.com.

I object! If you're referring to the gorilla Jimmy Olsen married in the Silver Age, she was NOT cranky -- she was very friendly!

Remember, the Pre-Crisis Jason Todd was a nice guy, if a little needy. It was the changes made to him Post-Crisis that altered him into a reckless liability that led to his (temporary) demise.

It was obvious to me reading Post-Crisis comics that whoever was writing Jason as Robin hated the character and hated having to use him.  Therefore he was intentionally turned into a jerk, and it was an easy call to kill off such a poor character.

Post-Crisis, that would be Max Allan Collins, who wrote Jason as unlikeable as possible.  Collins was followed by Jim Starlin, who went further and made him amoral as well.

I remember reading an interview with Collins - I think in CBG - where Collins stated that, as far as he was concerned, Dick Grayson was Robin, and that was that.  When asked about Nightwing, and the New Teen Titans, he said he didn't read books about teen anythings, and neither should any other self respecting adult.  I'm going by memory, and obviously paraphrasing, but the nasty tone of the interview has stuck with me.  It probably helps that I loved Wolfman and Perez on NTT and I found Collins' work on Batman to be quite terrible.  To be fair to him, though, he probably believed that the status quo would return and that one day Dick would be Robin again.  He had only been Nightwing for 2 or 3 years when Collins started his Batman run.

I should add that the Pre-Crisis Jason Todd was not much more than a Xerox of Dick Grayson, right down to the origin - from the circus, parents murdered in front of him, although this time by Killer Croc instead of Boss Tweed.  I can see why you would want to change that, but they still could have avoided making him an unlikeable brat. 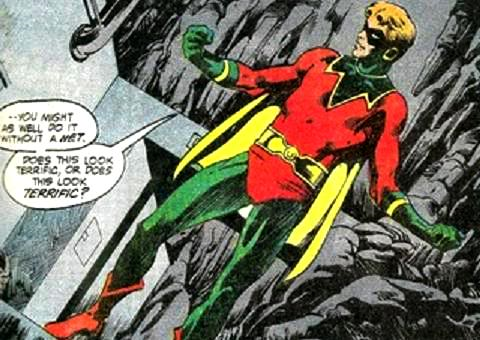 I was hoping that this would become the new Robin outfit, after adding a "R" emblem, of course. But when Jason officially became Batman's partner, they dyed his hair black and put him in the original Robin suit!

It wouldn't be until Tim Drake that they would finally modernize Robin's costume....after fifty years!

This similar costume and the red hair didn't last did they?  I think he only wore the above costume once, in Detective 526.  I didn't even remember that Jason had red hair.

Comment by ClarkKent_DC on March 10, 2013 at 1:52pm
Phillip, Randy and John Dunbar are spot-on. The pre-Crisis Jason Todd, right down to the red hair, has been pretty much forgotten, but he was a good kid. One variation in his origin from Dick Grayson's, as I recall, was that Killer Croc arranged for his parents to be eaten by crocodiles.

Unfortunately, it's the post-Crisis Jason Todd who we've had in our faces for far too long.

I didn't read very many of Jason's adventure during his first go-around at life, and was rather indifferent to him. Now, pretty much anytime I see Jason Todd now I wonder who wanted this SOB, back?

One thing I do remember is that the Todds were working with Batman and/or Robin to track down Croc. They got caught, killed then thrown in the croc pit. Harsh either way!