American Vampire writer Scott Snyder is having a lot of fun creating a new vampire mythology – which means a lot of fun for us. For proof, look no farther than American Vampire Volume Two (DC/Vertigo, $24.99), out this month, which collects issues #6-11 of the ongoing, mature-readers series, written by Snyder with art by Rafael Albuquerque. Or the five-issue American Vampire: Survival of the Fittest miniseries, with art by Sean Murphy, which begins next month.

What kind of vampires are in American Vampire, you ask? Potentially all of them.

The book asks “what if vampires were these physiological creatures,” Snyder said in an interview, “that … when their bloodline hits different populations, when the blood hits someone new from somewhere new, that it sometimes makes something new. … There have been secret species throughout history with different characteristics.”

Plus, “they all have different organic weaknesses, like wood causes this massive infection in the classic European kind, but wood doesn’t do anything to [the American] kind,” Snyder said. “They have different reactions to sunlight, different periods when they weaken. We wanted to create a fun genealogy for ourselves, almost like a big classification chart.” 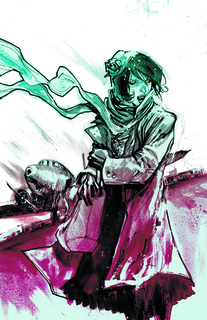 And in the 1880s American West, a new bloodline emerges when outlaw Skinner Sweet gets the bite from a Carpathian vampire (the familiar Dracula type). “He’s sort of almost an evolutionary leap,” Snyder said. “He is much more fierce, he has longer claws, longer fangs, he’s impervious to sunlight.” Sweet creates a new bloodline starting with the other major star of the series: Pearl Jones, an actress wannabe in 1920s Hollywood.

Those two characters were introduced in the first five issues of American Vampire, which were co-written by horror auteur Stephen King, and collected in the first hardback. In Volume Two we meet two more members of the cast: Cash McCogan, the sheriff of booming 1930s Las Vegas during the construction of Hoover Dam, and Felicia Book, whose lawman father met a grim fate thanks to Skinner. Both end up cursed by vampirism in a sense; McCogan winds up with a vampire baby, and Felicia herself is half-vampire – her father was in the middle of his transformation when she was conceived.

But that’s not all! The old Carpathian vampires are none too happy with this new breed, and want to stamp it out. Meanwhile, an organization called the Vassals of the Morning Star would be happy to see all vampires staked – or whatever it takes to kill them.

All of this comes to a head in the second volume of American Vampire, which I won’t spoil for you here (except to say that a vampire baby is a pretty creepy idea). But then the series progresses to World War II, where the story splits – in upcoming issues of the main series, some of the cast goes to the Pacific theater, while in the miniseries, Cash and Felicia head to German-held Romania to search for a vampire cure. And, yes, that means vampire Nazis.

“[Murphy] drew them all dolled up,” Snyder laughed. “They’re in full regalia. With vampire Nazis you really can’t go wrong.”

But the miniseries is also where Snyder expands and explains his brave new world. “It’ll take a huge leap forward in terms of the reader’s understanding of where vampires came from,” Snyder said “and what happens that made the world the way it is in terms of classic European vampire, the Carpathian vampire being so prevalent, and no other species being around.”

Through the Vassals, he hints at all the vampires throughout history – even back to Biblical times. “In the first issue we see the New York headquarters of the Vassals, which is in a pretty fun place, I think,” Snyder said. “They have skeletons of vampires from different eras and charts of where certain vampires are around the world.”

But as often as the word “fun” is thrown around, American Vampire is plenty serious. “What we trying to do is explore what makes us as Americans,” Snyder said. As to the miniseries, “we wanted to tell a story that mattered and wasn’t just a fun romp,” he said. “I couldn’t be prouder of it.”

But don’t worry. No matter how many monstrous babies or goose-stepping bloodsuckers appear, Snyder still wants American Vampire to also be “a big, fun, popcorn thing.”

That’s how I feel when I get to read it.

2)  American Vampire #15, out this month, takes part of the cast to the Pacific Theater during WWII.

3)  American Vampire: Survival of the Fittest #1 arrives in May, set in Nazi-held Romania in 1941.

Comment by Rob Staeger (Grodd Mod) on May 28, 2011 at 3:22am
I loved the first five issues, so I'll be picking this up, either in hardcover or paperback. Are there any extras in the hardcover beyond the six issues it reprints?