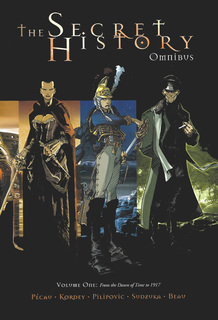 The Omnibus, which collects the ongoing Secret History series, begins in pre-history, where four kids (called “Archons,” which may be their tribal name) are given four runestone talismans of immense magical power by a dying shaman. His one warning: Don’t use them together. Which the two boys, Dyo and Erlin, and two girls, Aker and Reka, promptly do, in order to punish an invading tribe. That calls down an asteroid, which wipes out just about everything in the vicinity, including the invaders and their own tribe.

Thanks to the talismans the kids are immortal, so instead of dying they simply separate. What follows is exactly what you’d expect: The four are significant players in the history we don’t know behind the history we do know.

What surprised me, though, is that writer Jean-Pierre Pécau doesn’t take the easy, predictable routes. For one thing, his four Archons are surprisingly petty and immature for immortals – almost as if they learn nothing from their long lives. Dyo is power-mad, Reka is paranoid and possibly insane, Erlin is cold-blooded and diffident, Aker is earthy and engaged. (And yes, I noticed that Aker and Reka are the same name reversed, and that Erlin is close to Merlin and Dyo similar to Deo, or “God” in Latin. What this means, if anything, I couldn’t infer.)

Further, and more importantly, Pécau doesn’t put his immortals exactly where I expect them to be, nor have them do what I expect them to do. I assumed each would have some major influence on the big turning points of history. But Pécau plays a more subtle game, placing his Archons mise en scène to history’s turning points, in unexpected places. 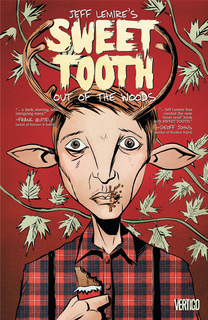 We do discover that the Archons are responsible for the parting of the Red Sea in Genesis, the Grail myth, the Black Plague (to some degree) and so forth. But elsewhere (elsewhen?) like the Crusades, the Napoleonic Wars and World War I, their actions seem almost incidental – a secret history simply occurring alongside major events, not causing them.

All of which is fascinating, although at times I simply felt lost, despite being fairly well-versed in world history. I found myself wondering if there was any point to all these shenanigans. But I still kept turning the pages, looking for an elusive grail of my own, which says a lot about the story’s strong premise and implacable grip on the imagination.

Further, let me praise the art. The bulk of it is by Igor Kordey, who has since made a name for himself at Marvel (Cable) and elsewhere. It is simply beautiful, and his research is impeccable. I can tell what era the story is in by clothing and architecture alone, which is a breathtaking feat – especially considering that the subtitle of the book is Volume One: From the Dawn of Time to World War I. That’s a lot of research!

* My wife is a big fan of Sweet Tooth, a post-apocalyptic series from DC/Vertigo where most humans are dying from a mysterious plague, while human-animal hybrids are being born for equally mysterious reasons. Since the hybrids are immune to the plague, the remaining humans are desperate to dissect them and find what protects them. Our protagonist is the Sweet Tooth of the title, a boy with antlers who loves candy bars (hence the nickname), and a tough former hockey player who captures the boy for the bloodthirsty scientists, but suffers an attack of conscience. Writer Jeff Lemire does an excellent job of fleshing out the characters and their shabby world, although I do have reservations about the art (also by Lemire), which is always sketchy and often amateurish. Still, the story is strong enough to bring me back each month, and allows me to recommend the first collection, Sweet Tooth: Out of the Deep Woods ($9.99).

* I’ve mentioned before how much I’m enjoying Marvel’s reprints of its “big monster” books from the 1950s, and Marvel Masterworks: Atlas Era Tales of Suspense Vol. 3 ($59.99) is no exception. With most of the stories by Stan Lee and most of the art by Jack Kirby, Steve Ditko and Don Heck, it’s giddy fun by the top pros of the day about Oog, Bruttu, Monstrollo and other preposterous leviathans.

Comment by Luke Blanchard on September 3, 2010 at 10:17pm
"Archons" means "rulers" (or "lords", "princes" etc.) in ancient Greek. The term was sometimes used for the principles of Gnostic systems.

Comment by Captain Comics on September 4, 2010 at 12:30am
Thanks Luke -- I almost Googled the term, because it was used in 'Star Trek' ("Return of the Archons') so I assumed it had some sort of historical or mythological import. But the book doesn't make anything of it, it just refers to them that way ... indicating (to me, anyway) that it was a tribal name.

In fact, the book lets a lot of this stuff just lie out there for the reader to attach meaning to. I mean, it doesn't take a genius to realize that Dyo (Deo) being a power-mad lunatic is some sort of theological reference. But what? The author doesn't say, his actions are not specific to what you'd expect (no Sodom and Gomorrah, for example) so it's a Rorschach test.

Comment by George on September 6, 2010 at 2:00am
Not sure if this is the right forum for posting these thoughts, but here goes: Is it just me, or has this site gotten a bit stale and predictable lately? Here are some suggestions/criticisms/observations:

Andrew Smith: Instead of just posting your newspaper column, I wish you'd write more essays like the one on why you quit reading Spider-Man. That one really hit home with me. I also began reading Spidey in the '60s (starting with No. 39), and I also felt great sadness when I finally dropped the book.

Chris Fluit: We know you love '90s comics. We GET IT. Just for a change of pace, why don't you try writing about comics from other eras -- even comics published before you were born! Try to find something from the Silver Age or Golden Age you like. I'm not asking you to kick the '90s cold turkey, just to put some variety in your columns.

BTW, are any women still posting on this site (aside from Mrs. Fluit)? This seems to have become an all-male hangout. Or am I wrong about that?

Comment by Captain Comics on September 6, 2010 at 3:21am
Good points, George. As it happens, we're faced with another Crisis on Infinite Freaking Move The Board AHHHH stuff, so now's as good a time as any to talk about it.

And your points should find a bigger forum, so why don't you post your challenge in the blog area? I've never tried it from a non-Mod position, but from the frequency of others posting, it doesn't appear to be too hard. Just post you challenge there, where I will answer (as will Mr. Fluit and others, presumably), and if you can't get it there I will get it there for you. Sound like a plan?