April 28, 2009 -- X-Men Origins: Wolverine, premiering May 1, seems a straightforward concept. The X-Men movies were popular, and Wolverine was the most popular character, so make a movie about him.

But there’s really nothing straightforward about the history of the feral X-Man – and the movie won’t make it any simpler. Let me X-plain: 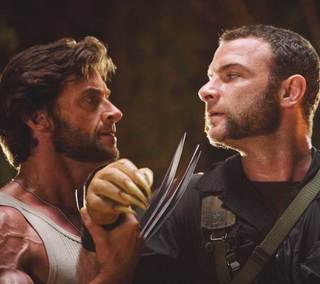 As hard as it is to believe now, Wolverine wasn’t always a big deal. In his first appearance, in two issues of Incredible Hulk in 1974, he was a short Canadian agent whose entire powers seemed to consist of enhanced senses, claw-gloves and a bad attitude. To say he was ineffectual against the Hulk is an understatement.

His next appearance was as a new recruit for the revived X-Men in 1975, where his rise to stardom began. Slowly, mysterious bits were revealed about the feisty canucklehead, among them his civvie name Logan, that his claws were part of him, that he had a healing ability that made him almost unkillable, that his entire skeleton was bonded to an unbreakable metal called adamantium, that he spoke Japanese, that he was a lot older than he looked and that his memories had been monkeyed with his entire life, so that much of his own long, long past was a mystery even to him. Also, like a real wolverine, he could be driven into a “berserker rage,” where he wouldn’t back off until his opponent was dead or he was. It was always a struggle for the tormented X-Man to keep his animal side under control.

All of this was catnip to comics fans. Wolverine became the breakout star of Uncanny X-Men as startling revelations about his past became almost commonplace.

Which is where the problems arise. It’s cool to write a story revealing that Wolverine met Captain America in World War II, which was done in the ‘80s. As was a retroactive story with Sgt. Fury. And Mystique. And Ben “The Thing” Grimm. And …

Uh-oh. That complicates a lot of character histories, especially since most of those characters didn’t recognize Logan when they “first” met in the 1970s. So further strained explanations were invented to make this patchwork history fit together. You can see the headaches all these retro adventures can cause.

Which is going to happen in the movie, too, according to the production notes from Fox. For example, a young Cyclops will appear, although he failed to recognize Wolverine in the first X-movie, which happened later.

Ow! There goes that throbby thing in my temple again!

So both the comics Wolverine and the movie Wolverine have histories complicated by retroactive revelations – and they won’t even agree with each other! Just for fun, here are some differences:

Movie: Wolverine is more than 150 years old, and fought in the Civil War.

Comics: Wolvie was born around 1900, decades after the Civil War.

Movie: Sabretooth (seen in the first X-movie) is Logan’s brother.

Comics: While Marvel played around with that idea of Sabretooth as Wolverine’s brother or father for years, it turned out they’re not related.

Comics: In the 1960s, the CIA recruited Wolverine for a covert military cadre called Team X, which included Sabretooth, John Wraith, Deadpool, Maverick, Kestrel, Mastodon and Silver Fox. In the comics, Maverick becomes Agent Zero, there is no Bolt and Wolverine doesn’t meet The Blob until much later. Also Col. Stryker, while an X-Men foe, wasn’t involved with Team X.

Comics: Logan doesn’t meet these three until after he’s recruited by the X-Men.

There’s more, but I won’t belabor the point. The X-movies have already diverged from the comics in so many significant ways that they are really different stories at this point. For example, in the comics Iceman and Angel were founding members of the X-Men, but are not in the movies – which will make it interesting to see who stars in the planned prequel X-Men Origins: First Class.

Which is fine. Despite being a diehard fanboy, I don’t mind the changes – I know different media have different requirements. I’m just there to see Wolverine do what he does best – whichever “origin” I choose to believe.