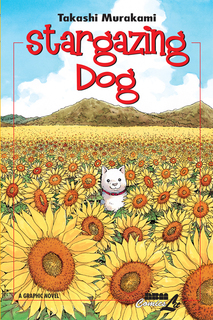 It’s the story of “Daddy,” an ordinary Japanese man whose life slips a gear and he loses everything: his health, his job, his family, his home. All that’s left is his car and his every-loyal dog Happie, whose thoughts narrate the first part of the story. So Daddy – that’s how the dog refers to him – goes on a road trip to nowhere as his scant resources dry up and he becomes another casualty of Japan’s “lost decade.”

I’m not spoiling anything to say that this doesn’t end well for anybody, since the book opens with the fates of the principals revealed. And I’ve read some reviews that call this maudlin or manipulative. I disagree: I think Murakami shows enormous courage in being relentlessly downbeat in the first part of the story. Had it been sappy I’d have been annoyed, but this story is told with such sincerity and honesty that instead I found myself weeping.

And the second part of the story, while also gloomy, shows glimmers of hope. It involves a social worker assigned to find out who Daddy was, since he died with no ID on him. Almost despite himself, this bureaucrat becomes invested in the story of the man and the dog that had only each other during a long, downward spiral. The social worker has plenty of time for it because, like Daddy, he is also a bit of a loser, one with a bland job and virtually no social life. While investigating Daddy, he remembers his own childhood dog with guilt and regret.

Again, this is a bit depressing.  But on the other hand, it’s possible that Daddy’s story ignites a little fire in the social worker, and one hopes that one day he’ll get another dog, one he will treat better. And, while he’s at it, maybe grow a little. Murakami says as much in an afterword, one where he notes that this is not meant to be a story of failure, “not the howl of a losing dog.” This is highlighted by the book’s title, which a foreword informs us is “named after the dogs that tend to stare at the stars wistfully. Just as we all wish for something that we will never possess.”

So there is something positive to take from this. I admit I found the first part so emotionally wrenching that it took me two weeks to force myself to read the second part. But afterward the story kept bubbling up in my thoughts, demanding that I think about it, learn something from it.

And as America suffers its own economic doldrums, Stargazing Dog has a lot to teach. Murakami points out that Daddy isn’t particularly talented or hard-working; he’s a bit too lazy or unimaginative to keep up with the times. But for all that, he says, he does not deserve his fate. He was not a bad man, Murakami says, but “a normal, simple kind of person. … In the past, he would have been an ordinary, good father. However, in today’s environment, it’s adapt or die. And that’s not right.”

The story seems to have struck a chord in stressed-out Japan, where Stargazing Dog has already sold more than half a million copies and been made into a movie. Now NBM has brought it to stressed-out America, where it ought to resonate as well. 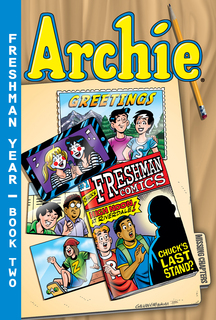 Another affecting tale comes in the unexpected form of the Archie Freshman Year Book 2 trade paperback ($9.95).

The Freshman Year series depicts the Riverdale gang in ninth grade, when the boys were a bit smaller and the girls a bit less, ah, robust. Also, writers have more leeway to vary from canon, like in the first story, where Jughead’s family moves to Montana. Moreover, Archie’s oddball friend finds his dream girl!

Of course, we know this would-be romance is star-crossed, because we know that the Jones clan is destined to return to Riverdale. But we also know that Jughead is reluctant to date – and now we know one reason why. (I won’t spoil it here.)

Freshman Year features stories on the rest of the gang, too, including some characters who exist only in this series. But it’s the poignant Jughead tale that makes it a keeper.

“Poignant.” “Jughead.” There are two words I never expected to put in a sentence together!

1. "Stargazing Dog" is a powerful, emotional story of a man and his dog. Courtesy NBM Publishing.

It is well known that Japanese movies tend to be slower, and to wallow in pain and angst... especially those that deal with the aftermath of WWII and postwar recovery.  So, it is no surprise that a graphic novel that is downbeat and deals with these issues might catch on well with the public there.  At least, it makes sense to me, even if I don't enjoy the pacing of those Japanese dramas...

I think the 'lost decade' in question is the last ten years or so, or maybe the 90s?  When Japan's economy tanked.  Whatever happened to the Bladerunner and Alien futures where the Japanese owned everything?

Purchased "Stargazing Dog" on Cap's recommendation.  I truly nice story.  Thanks for the recommend.