For those not reading Invincible Iron Man, things just keep getting worse for Tony Stark. Here's a press release and some images for the issue coming out Nov. 18.

I've already blogged about "Stark Disassembled" once, so I confess the real reason I threw this up was to practice posting multiple pieces of art. Since I seem to have figured it out, that raises the question: Would you folks like to see more of this sort of PR? And if so, where? As blog posts on the front page? In a group? In "General Comics Discussion"? 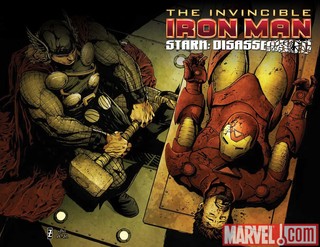 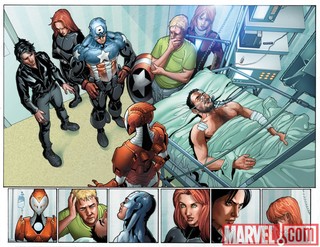 After the shocking conclusion to Tony Stark’s battle with the Iron Patriot, nothing will ever be the same as “Stark: Disassembled” begins in Invincible Iron Man #20! The Eisner Award-winning team of Matt Fraction and artist Salvador Larroca begin a new chapter in their critically acclaimed epic run asthe darkest chapter of Tony Stark’s life—or is that afterlife—begins! A perfect jumping on point for new readers, this landmark issue has three – count em’, three – covers by superstars Salvador Larroca, Patrick Zircher, and Marko Djurdjevic!

“Fraction's Tony Stark has been one of the most well-defined portrayals of the character ever… Maybe the best version of Iron Man ever. Larroca and D'Armata really are at their best with the mechanical aspects of this series.” – Timothy Callahan, ComicBookResources.com

“If you haven't given this a try yet, you really should…Highly Recommended!” – Adam Chapman, Comixtreme.com

“Fraction continues with his excellent characterization of Tony Stark.” – Gamerscircle.net

“Invincible Iron Man has provided a high-quality, 12-issue storyline with a consistent art team in the space of just 10 months--and that's definitely something to be proud of.” – David Wallace, Comicsbulletin.com

Comment by Cavaliere (moderator emeritus) on October 29, 2009 at 6:27pm
"The darkest chapter of Tony Stark's life?" That statement is up against a lot of very stiff competition.

As to where to post these: They'll certainly have the greatest visibility when done as a blog entry. Part of me says to put them in the group that most fits the subject, though. "Avengers Assemble" for the Iron Man PR. "School for Gifted Youngsters" for the Daken PR, etc.

Comment by Captain Comics on October 29, 2009 at 6:37pm
But what about general PR, like monthly solicitations? There's no group for those, and I'm afraid if I created a group for solicitations, I'd be on a slippery slope of creating more and more groups with each new unclassifiable PR item or new company. Bluewater? Radical? It's a long list. And who would look in a Bluewater group who doesn't already collect Bluewater comics? That defeats the purpose.

But I'm afraid to do PR as blog posts, because I get a lot of it -- probably 10 or 15 items a day. Since the front page only shows like the last four of five posts, I'd push everybody -- even my own columns -- off the page every day.

On the other hand, they need to be accessible and obvious so that Legionnaires SEE them. They need to be up front to be useful. And I'd hate to post 60 or 70 items a week in a corner where nobody looks. Especially the solicits, which are very labor intensive.

If we put them "inside" somewhere, I could always blog about and link to an item that caught my eye. Or maybe I could post a list in the blog area.

But where to put them?

Comment by Captain Comics on October 29, 2009 at 10:16pm
Yeah, I saw that, but do you think anybody will go look there? Or will I put be putting in lots of man-hours for something no one will see?

I guess if I could flag it somehow on the front page ... I'm just not sure what would be noticeable, but not so intrusive that it takes over.

Comment by Cavaliere (moderator emeritus) on October 29, 2009 at 10:26pm
The thing about the groups is that whichever one has the newest post is moved to the top of the list. Plus, of course, it is mentioned in the activity stream on the left side of the screen. You're the one making the effort, though, so it's really up to you.

Comment by Jeff of Earth-J on October 30, 2009 at 8:57am
Speaking for myself, I comment on blog posts but use the forums for discussion. I don't follow groups at all.

The blogs can't be sorted by "latest activity" to see what people have commented on. Also, blog comments can't be edited at all.

Comment by Rob Staeger (Grodd Mod) on October 30, 2009 at 1:32pm
I vote for Forums, too. It's a pretty central place, we can edit our comments there... and I feel like a little more activity and information density will get them hopping the way they used to.

Comment by Cavaliere (moderator emeritus) on October 30, 2009 at 1:35pm
And counter to other-Jeff (counter-Jeff?), I hardly go into the forums unless I see something on the front page that leads me there. I'm a groups-and-blog kinda guy. I do sometimes start a forum discussion if--and it's a big if--there isn't an appropriate group.

If the posts were to go to the groups, it'd generate more traffic for them, and I'd certainly go there more.