'Starlight' author to do signing at Memphis comics shop, drive-in

Michael San Giacomo, comics writer and Cleveland Plain Dealer reporter, will be at Comics & Collectibles (4730 Poplar Ave.) in Memphis Feb. 17 and the Malco Summer Drive-in (5301 Summer Ave.) Feb. 19 to sign copies of the Tales of the Starlight Drive-In graphic novel. He'll also sign copies of his Phantom Jack series, which will have a sequel from IDW (Phantom Jack: The Nowhere Man Agenda) in August.

Rather than paraphrase Mike, I'll just let him tell it in his own words: 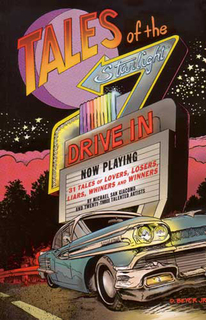 "WHO: Michael San Giacomo, writer of the award-winning graphic novel, TALES OF THE STARLIGHT DRIVE-IN and PHANTOM JACK:


"Graphic novelist and newspaper reporter Michael San Giacomo will sign copies of his 250-page graphic novel about life and love at the drive-in. San Giacomo and 23 artists from around the world worked for two years to produce “TALES OF THE STARLIGHT DRIVE-IN” for IMAGE COMICS. The book was chose the BEST GRAPHIC NOVEL OF THE YEAR in the 2009 Fan Awards of Comics Buyer’s Guide magazine.


“Starlight consists of 31 stories set in a mythical (but typical) drive-in theater. The stories take place over more than a half-century, following the lives of five characters whose fates are intertwined with the theater.


"Each story can be read and enjoyed separately, but when read together form a single, giant story of love, laughter, drama and tragedy, with an ending to raise your spirits. And an epilogue to raise a lump in your throat.


"The book was voted THE BEST GRAPHIC NOVEL OF THE YEAR by the readers of Comics Buyer‘s Guide in 2009.


"It’s a graphic novel for fans of the genre and a great way to introduce the genre to new readers. Drive-in fans and folks who “used to go there all the time as a kid” will relate to the stories that take place in front of the flickering screen.


"San Giacomo will also sign copies of his previous work, “Phantom Jack,” the way-too-close-to-true adventures of a newspaper reporter with an edge -- invisibility. The signing is just in time for the sequel PHANTOM JACK: THE NOWHERE MAN AGENDA, which will be released in August from IDW Comics."

Mike can be reached at MIKESANG@AOL.COM to talk about drive-ins in general and the Starlight in particular. More info about the GN can be found at http://talesofthestarlightdrivein.com/