The Story of Lee (NBM, $11.99) is a shojo (romance) manga about a Hong Kong girl and a Scottish boy stumbling over language barriers, family complications and cultural roadblocks on the way to maybe, possibly, could-be love. Do they get together? Will they? Can they? It doesn’t seem possible throughout, and – without spoiling the end – there’s definitely room for a sequel.

As novel as this situation might be for readers, it’s oddly familiar territory for the creators. Writer Sean Michael Wilson is a Scot living in Japan, and artist Chie Kutsuwada is a Japanese living in London. Their familiarity with the turf wars gives this unpretentious East-meets-West, boy-meets girl story an easy, breezy sense of verisimilitude.

And, OK, Lee and her Western boyfriend Matt make a cute couple. There, I said it.

Meanwhile, the warmth of Abram ComicArts’ The Night Bookmobile ($19.95) is chilled a bit by the suggestion that the joy of reading is a mixed blessing.

The van of the title is one found by a young woman named Alexandra as she takes a late-night walk in Chicago after a fight with her boyfriend. Within the bookmobile she finds, amazingly, every book she has ever read, including her childhood diary. The dreamlike nature of this treasure trove is accentuated by the heroine’s inability to find the bookmobile when she seeks it – instead, it appears when she least expects it, according to its own obscure rules.

This celebration of the written word has a dark side, though, as Alexi becomes obsessed with finding the bookmobile, and perhaps becoming a night bookmobile librarian herself. The current custodian hints darkly at the price one must pay to do so, which ratchets up the anxiety as the years pass and an anxious and lonely Alexi races to her goal. Written and drawn by Audrey Niffenegger (The Time Traveler’s Wife), The Night Bookmobile is a short story illuminating the wonderful and terrible seduction of the written word. As Neil Gaiman says in a foreword, it’s “a cautionary fantasia for anyone who loves books.” And, like The Story of Lee, it practically cries out to be a series. 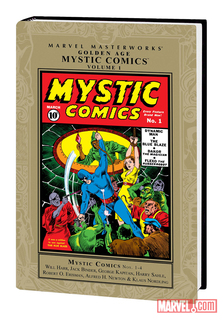 * I thought I was familiar with most of Marvel’s superheroes back when it was called Timely in the 1940s, so I was surprised when Marvel revived a dozen of them in a 2008 maxiseries called The Twelve, and several were strangers. Now that I’ve read Marvel Masterworks: Golden Age Mystic Comics Volume 1 ($59.99), I’ve discovered where characters like Dynamic Man and Mastermind Excello came from – and why they are deservingly obscure.

Most comics from the 1940s are pretty amateurish, but some had a rough charm and an infectious enthusiasm. Not so the substandard Mystic Comics, produced primarily by the second-rate Harry “A” Chesler Studio. Mystic never produced a legitimate star, and you can see why from this Masterworks, which collects the first four issues. It is unadulterated drek.

* A British publisher named Rebellion has embarked on reprinting in chronological order the adventures of perhaps the most famous British comic-book character. However, I have to say the first two volumes of Judge Dredd: The Complete Case Files ($19.99 each) aren’t for everyone. That’s probably because “Judge Dredd” never seemed to know what it was. Sometimes it was straightforward adventure fiction, other times it was a parody of adventure fiction. As a reader, I was never quite sure whether I should laugh or not. And given that “Dredd” was originally published in five-page increments (in the weekly 2000 AD anthology), most stories weren’t long enough to find out. And Dredd the character is rigidly one-dimensional, which – while presumably part of the joke – is boring in large doses.

These books do contain two of Dredd’s longest and most famous adventures (“Luna One” and “Cursed Earth”), plus the story of Dredd’s clone Judge Rico, which was the basis for the ill-fated Sylvester Stallone movie. The longer serials give the writers room to flourish, but the art is wildly uneven – especially since artists can change every five pages!

It is interesting to see the superhero genre through a British lens, where the benign authoritarianism that is the subtext of American costumed heroes is exaggerated and ridiculed. But that alone may not be enough to sustain interest for the casual reader through these 300-page, B&W behemoths.

"Flexo the Rubber Robot" sounds intriguing -- if not very intelligent.

Comment by PowerBook Pete, the Mad Mod on March 11, 2011 at 8:54am
Does this Judge Dredd book include the Burger Wars segment?

MYSTIC COMICS: Sometimes, by the time you post your reviews of collections I have read, they are no longer fresh in my mind, but we're right in synch with this one. In fact, I'm still reading mine. Usually, I'll read collections of Golden Age anthologies sucj as this start to finish, but this time, for whatever reason, I decided to read each character one at a time: all four Blue Blaze, all four Dynamic Man, etc. Reading in that order really emphasizes how little care was put into the development of these characters from issue to issue. These comics are crap, no question, but often bizarrely fascinating crap!

JUDGE DREDD: I seriously considered familiarizing myself with and collecting this character when my tastes were branching out beyond standard superhero fare in the '80s, but somehow I never got around to it. I flipped through the first of these collections when it first shipped, but decided not to buy it then, either. From your review I gather I made the right decision. There's too much other stuff to waste my time with something that's "boring in large doses."

Comment by Mark Sullivan (Vertiginous Mod) on March 11, 2011 at 6:51pm
The Night Bookmobile: thanks for reminding me about this one. The library has a copy, so I'll be reading it soon.

"It is interesting to see the superhero genre through a British lens, where the benign authoritarianism that is the subtext of American costumed heroes is exaggerated and ridiculed."

Exactly. Reminds me of Brit actor Michael Caine's comment: "Superman is how America sees itself. Batman is how the rest of the world sees America."

I read a couple of Dredd comics in the '80s and quickly lost interest. Excellent art, but the scripts were too one-joke.

Comment by Captain Comics on March 11, 2011 at 8:28pm
Pete: These collections don't include "Burger Wars," due to the obvious legal reasons.

Comment by Rich Steeves on March 11, 2011 at 9:53pm
TTW is one of my all-time favorite books, and I just got Bookmobile as a gift. Gotta check it out now!

I'm not a manga fan and never will be so The Story of Lee is an automatic pass.

I have a question for y'all, which I'm sure will make me look really stupid.

In the Foreword to Marvel Masterworks: Mystic Comics, the author noted that Martin Goodman added "Mystery" to the title of Marvel Comics so it became Marvel Mystery Comics, and that Daring debuted as Daring Mystery Comics with "Mystery" already in the title, but that Mystic didn't have "Mystery" in the title "for obvious reasons." He didn't elaborate, which left me flummoxed. I'm probably overlooking something obvious, but what obvious reasons? Aside from the alliteration, which I don't see as a fault, what's wrong with Mystic Mystery Comics as a title?