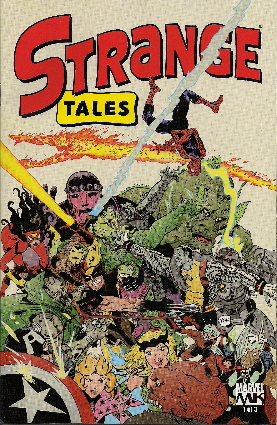 DC let independent and small press creators loose on their characters a few years ago and the result was the overwhelmingly charming, often funny, Bizarro Comics. Marvel does the same thing and we get Curate's Egg Comics. Sorry, I mean Strange Tales. Good in parts, but not quite good enough.

I'm all for out of continuity strips that allow creators new to the characters to offer a new perspective, or just have fun, and when it works, Strange Tales is terrific. Things kick off with a one-page Watcher intro which is most disrespectful to old Uatu. I loved it, so thanks to Nick Bertozzi.

The book proper begins with the best of the bunch, a Paul Pope Inhumans story starring Lockjaw, which is a hoot, and terribly sweet. Pope is joined on art by colourist José Villarrubia and the result is pretty special, with the protaganists somewhere between sinister and silly. The story of the teleporting pooch's difficult suppertime would seem more offbeat were it not for the recent Lockjaw and the Pet Avengers series, but it's still a hit.

I also loved seeing the marriage of She-Hulk and Man-Wolf presented with the sensibility of an 18th century romance novel. Writer John Leavitt, penciller Molly Crabapple and colourist/letterer Star St Germain blend wonderfully in an amusing, refreshing piece that demands a sequel.

'Marvel's Most Embarrassing Moments' reminded me of Mad's Scenes We'd Like To See, but only one of the nine good-looking gag panels actually amused. Writer artist Johnny Ryan does better with Punisher strip 'Scared Smart', in which a dad hires Frank Castle to sort out his slacker son. It's straightforward daft fun, drawn in a nice, clean humour style.

In 'And Call My Lover Modok' Nick Bertozzi provides a witty, cutely drawn tale of the big-headed fellow with a final twist of poignancy - fantastic stuff.

The rest of this £4.99 book had me scratching my head. Michael Kupperman's Namor strip, 'Fed Up With Man', is generally fun but let down by the final panel - not the one I'm posting here, I just like it - which is too random for my taste. 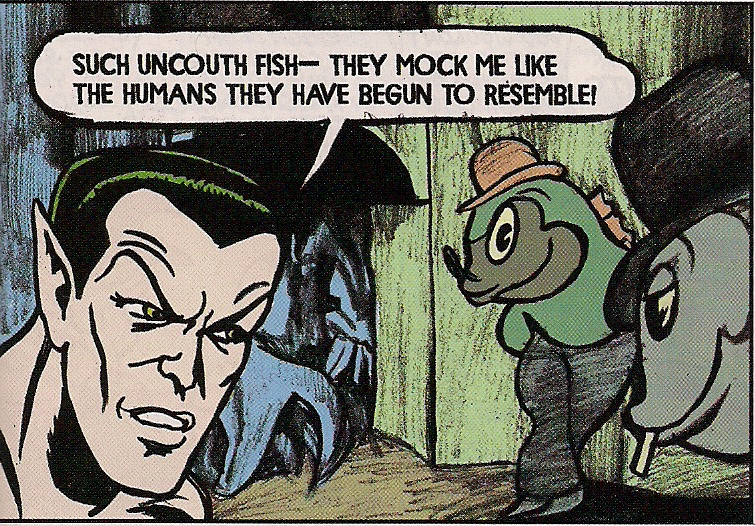 Peter Bagge's 'The Incorrigible Hulk' looks great - the art is reminiscent at times of Basil Wolverton - and has some pleasingly wacky moments, but is far too talky, rambling away to little point before announcing that it's continued next issue.
'Dr Strange Vs Nightmare' by Dash Shaw pleasured me so far, with its sideways take on a traditional Marvel match, but pulled away before providing anything resembling a climax.

'Hulk Squad Smash!' also suffers from a limp ending, petering out after its childishly drawn scene of Hulk vs rainbow clones (Jeph Loeb fans will likely love it).

My least-liked strip was 'Welcome to the Spider Town', by Junko Mizuno, in which a stunted Spidey and a creepily Lolita Mary Jane try to fit into a town where everyone is an arachnid. It's cutesy in an >ick< rather than an >aah< way.

Nicholas Gurewitch supplies a couple of lush one pagers; the Wolverine gag amused me at once, the Hulk joke took longer but made me smile lots when I worked it out.

A second Spider-Mannish story comes courtesy of Jason (no surname, but he's Norwegian) and it's OK. I think I dislike it more than I should because the characters are, for no obvious reason, anthropomorphic polar bears. Or maybe dogs.

So, Strange Tales is a decidedly mixed bag. I didn't love everything but the flavours certainly intrigued and I'll be buying next month to see what Marvel's experiment throws up, if you pardon the expression.

Comment by Jeff of Earth-J on September 9, 2009 at 8:28am
Hey, Mart! Where ya been? Ain't seen ya 'round these parts lately. I was curious about this one. Some parts look utterly Mad (pun intended), but it also looked like a really mixed bag (as you confirmed). Someone else posted his thoughts on the main board, too, so ultimately I'll be giving this one-shot I'd likely only ever read once anyway a pass.

Comment by Martin Gray on September 9, 2009 at 8:35am
Hi, been busy with summer stuff, reporting on Edinburgh Fringe, dad visit, that sort of thing. Here I am, missed you too.

I thought the old board was deid?

Comment by Jeff of Earth-J on September 9, 2009 at 10:17am
Not quite dead yet, but I was referring to the public forum of the Ning site.

Comment by Martin Gray on September 9, 2009 at 11:20am
Well, searched General Comic Discussions, to no avail - HYALP!

Comment by Doc Beechler (mod-MD) on September 9, 2009 at 11:50am
Jason always uses birds and bear-dog people, I believe. It's like the Portland version of Duckburg...

Comment by Jeff of Earth-J on September 9, 2009 at 4:21pm
Bill Beechler posted the following to the "This Week's Comics" discussion on September 3:

Strange Tales - This was quite a bit of fun. Anytime you get Paul Pope doing a Lockjaw story is a good time. Jason's Spider-Man tale about Pete trying to get into a bar fight had a good "punch" line (Haw! Haw!) The MODOK story was silly...but sad. Peter Bagge seems to like Bruce Banner and the Hulk a lot more than he liked Spider-Man as jade jaws is treated much better by him. Dash Shaw's Doctor Strange was my favorite, though...I would actually buy a Doc Strange monthly by him.