Superman Un-American? Don't bet the Kent farm on it

It seems impossible to avoid the “Superman renounces citizenship” controversy, so let’s tackle it head on. For those just coming in, the debate is born of an exchange in Action Comics #900, in a short story where Superman stands in Tehran for 24 hours (but otherwise takes no action) to show solidarity with pro-democracy demonstrators. When the Iranian government calls this an act of war by the United States, Superman tells a worried U.S. national security advisor that he’ll renounce his citizenship because he’s “tired of my actions being construed as instruments of U.S. policy.”

Aaaand cue the faux outrage, especially on the right of American politics.

I don’t mean to pick on Fox News, but they were braying the loudest. The story, titled “The Incident,” was condemned on The O’Reilly Factor, Fox & Friends and on Fox Nation, where potential presidential candidate Mike Huckabee called it “disturbing.” GOP activist Angie Meyer ranted on Fox that it showed a “blatant lack of patriotism,” that it “belittled” the United States and that it was an “eerie metaphor” for America’s apparently low (in her view) standing in the world.

Meanwhile, other media got into the act. Most major newspapers, news broadcasts and online news sites carried a news story, commentary, or both. A piece by The Associated Press appeared in many small and mid-size newspapers, including my home base, The Commercial Appeal in Memphis. While I’m glad the Man of Steel is still important enough to get that kind of coverage, I’m deflated that this non-story is the reason.

First, let’s put it in context. Superman’s remarks ran in a measly 9-page back-up story in a 96-page issue. (By contrast, the lead story was 52 pages.) Plus, he only told us what he was going to do, not that he’d actually done it. This is a minor story by any measure, and is likely nothing more than a set-up.

Second: history. Superman was deputized by every United Nations member back in the ‘60s, and although the franchise has been rebooted once or twice since then, he has been regarded as more or less a citizen of the world for decades. And although most of us know the “truth, justice and the American way” line, it didn’t start in the comics – it was first heard on the Adventures of Superman radio show (1940-51) and became part of the familiar preamble to the Adventures of Superman TV show in 1952. For the first several decades in the comics, the Man of Tomorrow merely fought for “truth and justice.” Besides, Clark Kent is still a U.S. citizen, and that’s who the Man of Steel really is; the guy in the circus suit is the disguise.

Third: Trademarked characters rarely ever change. You can’t fundamentally alter a character like Superman, or he’ll lose whatever made him popular in the first place. DC Comics even admits that. "Superman … has long embraced American values,” said co-publishers Dan DiDio and Jim Lee to The New York Post. “As a character and an icon, he embodies the best of the American way." In other words …. nothing will change. 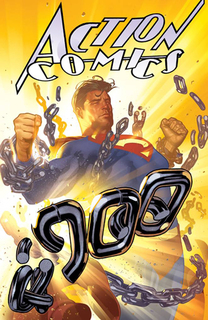 Fourth: Money. Or to put it another way, “Geez, it’s not like they killed him or anything.” Because, duh, they did! And the 1992 “Death of Superman” sold enough comics to fill up the Fortress of Solitude. Which lasted, what, a year? And that was death! So how long do you think this development is going to last?

Here’s the lesson: Comics survive by telling new stories, not the same one over and over. Creators like to shake things up, even if it’s only temporary, even if it’s only the illusion of change. This is a story meant to sell comic books, not a denunciation of patriotism or whatever other kooky idea you hear from politicians and media talking heads. Who, it must be noted, are also trying to sell you something.

Spot on. Not only is this just a story, it’s a story aimed at comic-book readers. Who, obviously, are a lot savvier about comic books than Mike Huckabee.

I see it as more as a way for Superman to ensure the world that he is for global peace and unity, not merely American interests (see Batman: The Dark Knight Returns). There is a reason why the Kents raised him and not turned him over to the government.

Good points all the way down the line, Cap.

I remember when I was still writing my newspaper column and my editor insisted I write about Wonder Woman cutting her hair.

Also: Cap have you noticed that the Associated Press is running tons* of comics articles now? We're getting about three a month lately, which is a huge change for AP (,,, up from maybe 2 a year). Curiously, they're all by the same guy ... methinks a fan has infiltrated the NY headquarters!

An aside: I hadn't seen the alternate cover with the chain links making the 900. Pretty cool!

Comment by Mike Parnell on May 12, 2011 at 10:03pm
I took the renouncing act as a statement that Superman is not going to get caught up in the tribalism that is America today.

Comment by Cavaliere (moderator emeritus) on May 12, 2011 at 8:37pm
Good response to the situation, Cap.

Jeff of Earth-J replied to Jeff of Earth-J's discussion DC's 1st Issue Specials
""Their powers were mostly super-strength and durability." I attribute that to Simon…"
17 minutes ago

The Baron replied to The Baron's discussion List of Super-Speedsters
"Added Blitzen of the New Reichsmen."
1 hour ago

Lee Houston, Junior replied to Steve W's discussion A Cover a Day
"Almost didn't make it today but here we are, courtesy of the Grand Comics Database."
8 hours ago

The Baron replied to The Baron's discussion List of Super-Speedsters
"Added Whiz Kid, Zig-Zag and Monenta,"
8 hours ago

The Baron replied to The Baron's discussion List of Super-Speedsters
"Will add Yo-Yo Will add Kid Comet Maybe I'm splitting hairs , but with Blaze allen, I feel as…"
9 hours ago

Richard Willis replied to Captain Comics's discussion Comics Guide: Nov. 28-Dec. 4, 2022
"Even though there is a fair amount of content, my scrolling reminds me that this is a "fifth…"
10 hours ago

The Baron replied to The Baron's discussion List of Super-Speedsters
"I'll add 'em both."
10 hours ago

The Baron replied to The Baron's discussion List of Super-Speedsters
"Good ones!"
10 hours ago