'Superman vs. Muhammad Ali' is just much fun as it should be

Nov. 30, 2010 -- Let’s address this right away: An oversized comic book titled Superman vs. Muhammad Ali sounds like the dumbest idea ever. Amazingly, it turned out to be a great idea 32 years ago, and has only improved with time.

DC Comics published Superman vs. Muhammad Ali in 1978 as All-New Collector’s Edition, Vol. 7, No. C-58 – part of series of oversized books that measured roughly 10-by-13 inches, usually called “Treasuries.” The Ali Treasury was one of the few original ones ever printed by DC, as most were reprint.

It was the right decision, given the eye-popping art by superstar artist (and co-writer) Neal Adams. Most Treasuries just expanded regular-size comics, which often looked cheesy. But the format was perfect for Adams’s larger-than-life, photo-realism style, which makes you feel like you can walk into the panel. You need no further evidence than the incredibly detailed cover, which boasts 172 real people, from then-President Jimmy Carter to Johnny Carson to then-DC Publisher Jenette Kahn. (Fortunately, there’s a key.)

DC says the size made the book too difficult to reprint for years, although it seems more likely that celebrity images in the book held things up until recent changes in copyright law. What matters is that the book is finally back in print, at its original size in a “facsimile” hardback ($39.99) and a “Deluxe” hardback at regular comic-book size (with some additional sketches and background, $19.99).

Of course, it still sounds stupid. But it isn’t, honest. The story is about an alien race called the Scrubb that will wipe out Earth unless our champion faces their champion, the super-strong Hun’Ya. Both Superman and Ali volunteer, but since the fight will be under a red sun – where Superman has no super-powers – they fight a preliminary, non-powered boxing match for the right to represent Earth. Naturally, Ali proves the superior boxer, and must face Hun’Ya. Meanwhile, Superman takes on the Scrubb armada.

OK, no points for guessing who wins. But so what if the story is predictable? The joy is in the art, and in Ali’s one-of-a-kind persona. Sure, some of that is the nostalgia factor for us cranky oldsters, but you dang kids who won’t get off my lawn will love it too. There’s a reason that Muhammad Ali joins Superman on the Top 10 list of Most Recognized People on Earth, and he doesn’t even enjoy the Man of Steel’s advantage of being fictional (and therefore immortal). Ali was not only one of the biggest celebrities of his generation, not only the most dominating boxer, not only beloved worldwide for his civil rights work, but also just a lot of fun. He really was “The Greatest,” and so is this book.
REPRINT ROUNDUP * In the mid-1960s, virtually all comics publishers jumped on the superhero bandwagon, thinking it a fad. That includes Archie Comics, which for a couple of years ran occasional stories starring a super-heroic Archie (Pureheart), Jughead (Captain Hero), Betty (Superteen), Reggie (Evilheart), Veronica (Miss Vanity) and Moose (Mighty Moose). A number of these have been collected by IDW in Archie: Pureheart the Powerful ($19.99).

I read most of these stories when they came out the first time, and have always remembered them fondly. To my amazement, they still hold up 45 years later. These stories are typically wacky Archie stories of the time, silly fun with subtle commentary on current events. (For example, during a time of rising recreational drug use, Archie learns how to be Pureheart by reading Happy Hallucinations and How They Happen.)

Interestingly, these stories anticipate the “Batman” TV show by a couple years, being camp before camp was cool. And they’re still cool now. 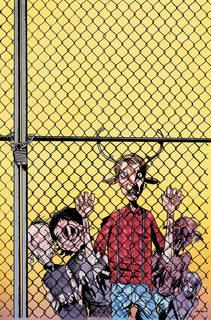 * The second volume of Sweet Tooth has arrived ($12.99), collecting issues 6-11 of the ongoing DC/Vertigo post-apocalyptic series. The story picks up steam here as hints about the lethal global pandemic are revealed, and Sweet Tooth – a human-animal hybrid – may prove to be the key. Also, there’s lots of background and character development for Jeppard, the former hockey player whose conscience died with his wife – but is showing signs of resurrection.

This story drops hints and moves forward at just the right pace to keep the reader turning pages. I’m still no fan of writer/artist Jeff Lemire’s sketchy art style, but that’s just a matter of taste – my wife snatches “Sweet Tooth” out of my hand when I bring it home every month with no reservations.

Comment by Luke Blanchard on December 3, 2010 at 5:17am
I'm surprised to learn the first Archie superhero stories predated the Batman show. But I think it was by about half a year rather than a couple of years. (Was the main story from Life with Archie #42 the first one? According to the GCD that was cover-dated for Oct. of 1965: according to the IMDB the Batman show debuted in January the next year.)

Comment by Captain Comics on December 3, 2010 at 6:13am
Thanks for doing the math, Luke. I was just relying on my ancient, creaky memory, which remembers the Batman TV show not as the kick-off of "camp," as most histories have it, but the climax. By 1970, camp was dead in comics (which had Neal Adams and Irv Novick doing most Batman covers) and everywhere else, too, except television, which occasionally tried to resurrect it in "superhero roasts" and stuff.

It is interesting reading these pre-Batman Archies, though, in how "Bill Dozier" they were, even if it was only by a few months. Evidently Archie and Batman were riding the same pop-culture wave.

Comment by Captain Comics on December 3, 2010 at 6:27am
Also, I just had a conversation with Victor Gorelick, co-president and EIC of Archie Comics, who is only one year younger than Archie/MLJ itself. He's amazingly quick, and deeply invested in Archie's new direction.

Comment by Jeff of Earth-J on December 3, 2010 at 8:12am
I was far too sophisticated to read Superman vs. Muhammad Ali in 1978, at the ripe old age of 14. I gave it a pass and have regretted it whenever I thought about it ever since. I’ve already read the facsimile edition twice, and as I’ve said elsewhere on this board, it gave me a nostalgic “sensawunda” I haven’t experienced in decades and probably never will again.

Pureheart the Powerful sounds interesting, but even if the first volume of Archie Archives were solicited for sale April 23, there are several volumes of the “Archie Americana” series I’d buy first. Maybe someday, though.

Comment by Philip Portelli on December 3, 2010 at 7:34pm
I, too, passed on Superman vs. Muhammad Ali in 1978 when I was 13. It didn't appeal to me at all. Man was I stupid! Bought the reprint and loved it! It was a great story with amazing art. Was it improved by the reproduction? It was so deep and vivid! This is why we all should be buying Batman: Odyssey as a way of saying "Thank You" to Neal Freakin' Adams!

Ali was portrayed as a real character and a real hero. I'm surprised Superman didn't nominate him for JLA membership. And after reading it, I would have agreed with him!

The campy Silver Age Teen Titans -- by the same writer, Bob Haney -- also began their series in 1965, several months before the "Batman" show debuted. Read a lot of DC's 1965 output, and it becomes clear that Gardner Fox and John Broome were also having trouble taking these characters seriously.

There was definitely something in the air in '65 -- a cheerful debunking of old-fashioned heroics, which may have begun with the James Bond craze a year or two earlier. All the conditions were right for "Batman" to become a short-lived but intense TV phenom.

Comment by Figserello on December 3, 2010 at 9:32pm
Cap said Let’s address this right away: An oversized comic book titled Superman vs. Muhammad Ali sounds like the dumbest idea ever. [...] Of course, it still sounds stupid. But it isn’t, honest.

I seriously don't get this. Maybe I have a weakness for kitsch on its own terms and can't see how this is a dumb idea, or maybe growing up on a mountain in Ireland in the 70's, Superman and Muhamed Ali were equally exotic, alien, wonderful characters to me as a child. In any case they still both seem to be about equal as

b) inspirational, admirable heroes that brought some of the better human values to life to make the 20th century that little bit richer.

I just don't see how it's not a great match, then and now, and worthy of being immortalised by some of comics finest talents!

Yes, everyone is saying that they see now that it's a great comic and document of its times, but it would never have occurred to me to say that it was a daft idea in conception.

Perhaps in my own way, I take 'pop' culture too seriously?

Jeff said it gave me a nostalgic “sensawunda” I haven’t experienced in decades and probably never will again.

Saddest sentence of the week! That'd be terrible if it's true.

If you get a chance, Jeff, have a look at Urusawa's Pluto. Maybe not so much 'sensawunda', but certainly moving and thought-provoking and immersive ie sensawunda for grown-ups.

Comment by Philip Portelli on December 3, 2010 at 10:37pm
Well, Figs, they did do Dennis Rodman vs. Godzilla! Seriously though, if today they offered Superman vs. Alex Rodriguez or Tiger Woods or David Beckham or John Cena, what would your first reaction be? You can substitute any athlete from any decade: Joe Nameth, Pele, Reggie Jackson, Michael Jordan, Hulk Hogan, Mike Tyson, etc. It still sounds silly but in this case, it works and works out beautifully on the strength of both Superman's and Ali's personas and impact on a child's imagination.

Again I skipped it originally and again you're correct that we shouldn't judge a book by its title but for something like this truly unique team-up, it's probably (with emphasis on probably) the exception than the rule! Though I'm amazed that Stan Lee didn't try something similar with Spider-Man!

Comment by PowerBook Pete, the Mad Mod on December 4, 2010 at 8:45pm
I bought Superman vs Muhammad Ali when it first came out, and I still have it. I'll have to read it again soon.

Comment by Doc Beechler (mod-MD) on December 9, 2010 at 11:52am
Well, we did have the recent Spider-Man/Pres. Obama team-up. That sold pretty well. Later this month, both Pres. Obama and Sarah Palin will be hanging out in Riverdale.

Spidey also teamed-up with the original SNL cast and the Avengers and David Letterman worked together in the 80s.