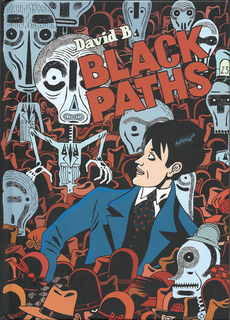 * Black Paths ($24.95, SelfMadeHero) is by “David B.” (Pierre-Francois Beauchard), made famous by his riveting biographic memoir Epilepsy (about living with a brother with the disease). This book is less emotionally engaging, but is eccentric enough to warrant attention.

Black Paths is set in the buffer city-state of Fiume (now Rieka, Croatia) between the world wars, when it was led by an Italian poet with 3,000 Italian nationalists at his disposal, who was attempting to set up a society based on Dadaist principles. (Yes, that actually happened.) The author follows a gang of the sort of drifters and dreamers, soldiers and swindlers, who end up in a place like this, as Fiume descends from would-be political utopia into utter, and predictable, chaos.

There’s a bittersweet love story at the heart of Black Paths, but the real star is the author’s art. Scenes of violence are grotesque and surreal, self-important characters are exaggerated and cartoonish, layouts are aggressively experimental. It doesn’t always work, and the story really isn’t strong enough to warrant all this effort, but Beauchard is an important voice in comics, and well worth watching.

* I’m too old for Tank Girl, but I understand the appeal.

Tank Girl is the sort of concept enjoyed by rebellious teens of every stripe, but especially those with tattoos and piercings who listen to the Sex Pistols while playing Grand Theft Auto. Tank Girl takes place in a chaotic world without rules, where authority is corrupt and incompetent to the point of irrelevancy. Tank Girl and her associates – who have no real personalities but do have cool names, and whose main purpose seems to be to remind Tank Girl how cool she is – ride around in what appears to be the Australian outback in a modified tank, drinking a lot of beer, doing a lot of drugs and listening to a lot of rage-filled music. Tank Girl’s much-abused boyfriend is a mutant kangaroo, a bit of nonsense which is never explained.

And they do exactly as they please, as evidenced by the latest collections from Titan Books, Tank Girl: Carioca and Everybody Loves Tank Girl ($19.95 each). In the first half of the first book, by Alan Martin and Mike McMahon, Tank Girl and her associates pull off an elaborate murder of a game-show host who insulted our heroine. (Who knew punk rockers were so thin-skinned?) This is played for laughs, and in the second half of the book, TG has an epiphany and tries to live a life of zen – which lasts only until she gets attacked by her victim’s monstrous and despicable widow. The second book, by Jim Mahfood and Martin, is more a series of chaotic vignettes, with a through-line of TG baby-sitting a bratty kid. Both books are interspersed with gag pages, illustrated poems, songs and other one-offs.

In short, Tank Girl is comics on acid. Or, at least, modern comics trying very hard to be the underground comix of the ‘60s, to which these books owe a huge debt.

* What would humans be like if they could live forever? That idea is explored in Last Days of an Immortal ($24.95, Archaia), a book overflowing with fascinating concepts but marred by unappealing art.

Immortal is set in the far future, where humans have developed the technology to create “echoes,” extra versions of themselves that can take their place should they die. The downside is that with each echo, more older memories are lost.

French writer Fabien Vehlmann boldly explores this idea to its fullest. But he’s wise enough not to tell us anything, instead merely showing this world, allowing us to infer what we will. There is no hint of religion, for example – but why would there be, when no one fears death? Crime, war, jealousy, fear and other ills aren’t in evidence, either – but why would there be, when anyone can have anything (and anyone) at any time? And so forth.

In fact, the chief, and perhaps only, cause of friction in this society is the differing social mores of various alien groups (Earth is part of a large planetary union). In this world, the police – excuse me, the Philosophy Police – are more investigative diplomats than law enforcement.

Which is the putative plot of Immortal, as it begins with a murder. The victim is all right, of course: He had numerous echoes, one of which became “primary” when his original body died. Our hero Elijah, a Philosophy Cop renowned for his insight and politesse, is assigned the gig, adding to his many other important cases.

But Elijah has a problem of his own: His life is so too perfect, too politically correct. It’s hectic, yes, but ultimately boring. Vehlmann’s unspoken message is that a life without passion might not be one worth living – especially if one lives forever. This is fun stuff to ponder.

The downside, as mentioned, is the art. French artist Gwen de Bonneval draws in a cartoony, simplistic style without detail or technique. It resembles the work of Marc Hempel and Mark Wheatley (Mars), but without the professional polish. Some may find this refreshing, but it just made me think that Last Days of an Immortal would have worked better in prose, which would have allowed more room to explore Vehlmann’s ideas.

Having just read a little bit, I think Jim Mahfood is a perfect fit for Tank Girl.

Oh, man, I haven't read Tank Girl for probably 20 years, now. But there was a while I did love it so... especially when I was dating a girl who could be a dead ringer for TG when she felt like it.

Did your gf have tattoos of .45s pointing at her crotch from each hip?

Heh. That she did not.

Ha, tell that to my 21-year-old self! "Dead ringer" might have been overstating it, but it was close enough for horseshoes.

Especially when the girl's wearing just a bra, cutoff shorts, and combat boots.  Tattoos or not, she had enough of the look down pat.

If she had had tattoos, would you even have noticed?

Ha, good question! Maybe she had them and I didn't!