Tardi brings mud, blood and terror of WWI to life in 'Trenches' GN

Tardi was greatly affected by his grandfather’s stories about World War I, and has published several graphic novels using them as a base. Or so I hear – I haven’t seen the others. But if they are of the caliber of Trenches, I want them all. 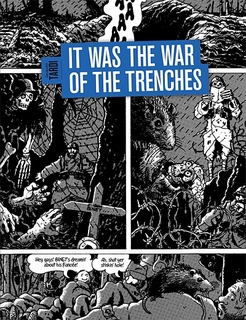 Trenches is a series of vignettes about the dehumanizing horror, the maddening boredom and the grotesque suffering at the front, leavened only by the blackest of humor. There is no protagonist, no hero. Just ordinary men trapped in a diseased, bloody, muddy, irrational, existential holocaust.

I was nauseated. I was horrified. I was transfixed. Everyone should read this book and re-learn the lesson that war is not diplomacy by other means, but the most hellish, useless and destructive tool at our disposal, and should be found somewhere past the last resort.

Tardi’s stories rely not only on his grandfather’s tales, but other veterans’ reminiscences and histories to achieve stinging, stomach-churning verisimilitude. No less credit goes to the heavily researched art, of the clean-line school of Herge fame. But where Herge illustrated the upbeat adventures of Tintin, Tardi turns this skill – half-illustration, half-cartoon – to painstakingly bring filthy, violent death to full-throated life.

Art Spiegelman, creator of the Pulitzer-winning Maus, calls this book “an essential classic.” Spiegelman knows a thing or two about bringing war stories to life, and he is correct.
REPRINT ROUNDUP 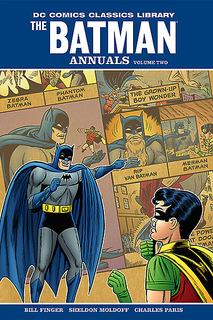 * Someone who isn’t a lifelong comics fan may wonder about the “Batman Annuals” reprint series, the second volume of which recently arrived ($39.99). After all, the early 1960s Batman Annuals this series reprints (which weren’t annuals at all, as they came out several times a year) were themselves reprints, usually of Batman and Detective stories from the late 1950s. What sort of loon buys a reprint of a reprint?

Well, the etymological origin of “fan” is “fanatic,” so that might be a clue. But seriously, as Bat-movie producer Michael Uslan indicates in his introduction, these collections take older fans back to that certain time and place where they first read them. Each of these stories brings me vivid images of my grandmother’s house, the sensations of a long summer afternoon in my childhood back yard, or even the smell of the family station wagon.

But even if you’re not an aging fanboy, and even though these stories aren’t really all that good, these books are interesting from a historical perspective. For one thing, the stories are mostly from the mysterious 1950s, the only decade that DC Comics hasn’t systematically reprinted. And, as fan Jeff Plackemeier notes on my website, this is a Batman that simply doesn’t exist any more – one from before the “New Look” of the 1960s, before the campy TV show, before the “Dark Knight” makeover in comics, animation and the movies. This is a Batman you’ll never see again.

Plus, some of the stories are wacky or charming enough to create new happy memories for younger fans. Thrill to Batman becoming a giant, or a merman, or a radioactive zebra-striped crimefighter! Gasp at “imaginary tales” about the descendants of the Caped Crusaders! Marvel at Batman becoming more like Superman of the time, complete with snoopy reporter girlfriend and Bat-Hound! Snicker at what passed for cutting-edge forensics in the ‘50s!

Yeah, they’re kinda silly and dated. But to me, that’s part of the charm. 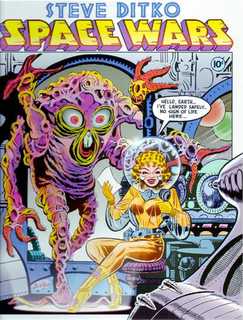 * Steve Ditko is one of the most interesting artists in American comics history, and is worthy of all the recent books about him. Steve Ditko: Space Wars (Vanguard, $34.95) was one of the first (2005), but I just got it and have to warn that it’s only for Ditkomaniacs.

It’s relatively expensive for the package, $35 for 134 B&W pages of short SF stories Ditko did in the 1950s. Ditko’s careful brushwork is crisp and effective in B&W, and even though it’s early in his career you can see the signs of greatness – plus the tricks he had abandoned by the time of his famous work on Spider-Man, Dr. Strange and Blue Beetle.

But I recommend waiting for Blake Bell’s Steve Ditko Archives to publish an SF volume. It will be cheaper, more comprehensive and in color. Space Wars is for Ditko fanatics only.

Contact Andrew A. Smith of the Memphis Commercial Appeal at capncomics@aol.com
.

Comment by Travis Herrick (Modular Mod) on October 7, 2010 at 4:18pm
I flipped through that Steve Ditko book when it first came out, and the price scared me away at the time. Plus, it didn't do much for me at the time either. Now the upcoming Archives book sounds like a winner.

As does the war book. That is definitely up my alley.

Comment by Jeff of Earth-J on October 8, 2010 at 3:04pm
BATMAN ANNUALS: Thanks for the shout-out! For the record, I'd like to to this opportunity to express that I prefer the term "fancier" to "fanatic."

STEVE DITKO: There is a lot of reprinted Steve Ditko material available (except for Mr. A! Where's my Mr.A?), enough for me to be picky and choosey. I gave a pass to Space Wars, but I highly recommend both Strange Suspense (volume one of the Steve Ditko Archives from Fantagraphics) as well as The Art of Steve Ditko (from IDW). I don't remember whether or not we discussed either of those, but they're both great... and in color to boot!

Comment by Captain Comics on October 8, 2010 at 3:16pm
I was pleased with Bell's Strange Suspense as well, which for those just tuning in is a comprehensive collection of Ditko's "suspense" stories from his first two years in the business (1953-54). I have ordered Vol. 2 from Amazon, Unexplored Worlds, which I assume to be a similar collection focusing on his SF work, which, if true, would make Space Wars entirely superfluous. I also have The Art of Steve Ditko and Bell's Strange and Strangers: The World of Steve Ditko, and am pleased with both.

Comment by Luke Blanchard on October 8, 2010 at 3:41pm
Some information about Tardi's other work, particularly his stories about his heroine Adele Blanc-Sec, can be found here, at the Cool French Comics site.

Comment by George on October 8, 2010 at 5:18pm
"Each of these stories brings me vivid images of my grandmother’s house, the sensations of a long summer afternoon in my childhood back yard, or even the smell of the family station wagon."

Ditto, Cap. I wasn't much of a DC fan growing up, but reading Silver Age Marvels brings the same feeling.

Comment by George on October 8, 2010 at 6:27pm
"But even if you’re not an aging fanboy, and even though these stories aren’t really all that good, these books are interesting from a historical perspective."

That's how you sometimes have to approach stories of this vintage -- especially if you've never read them and have no nostalgic memories to fall back on. You can't expect them to read or look like modern comics. It was a stumbling block I had to overcome when I read the Showcase reprints of '50s and '60s DCs. Not everything from that era is as timeless as EC or Eisner. You have to make allowances and put them in their historical context.