The Avengers strike back!

Say what you like about Brian Michael Bendis -- and this board has lots of strong opinions! -- from my perspective, he has converted the Avengers franchise into the core of the Marvel Universe. 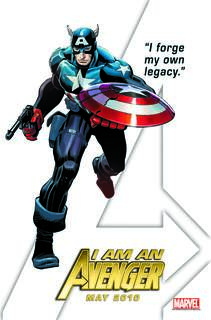 After the X-Men emerged as the industry's top franchise in the early 1980s, Avengers and its related titles (Iron Man, Thor, Captain America) fell on hard times. I don't know if there's any connection, but I suspect there is -- if nothing else, there's a finite amount of money in fans' pockets, and if one title goes up, other titles generally go down. But leaving the X-Men aside, during the '80s and '90s the Avengers titles were selling so poorly it had this old Avengerphile a little concerned.

And whether chicken or egg, they weren't do well creatively to my eyes. Some Legionnaires have expressed appreciation for such things as the Mike Deodata Thor, or the Bob Harris Avengers. Me, I couldn't get my head around those darn leather jackets the Avengers were wearing (yeah, that sure improved Captain America's outfit) or the Rob Liefeld-esque art that Deodata and others were doing. (I was not a fan of Liefeld's work even when it was popular.)

Now, I'm not here to praise Bendis's content uncritically. Like many fans, I was not enthusiastic at the time with "Avengers Disassembled," which suggested to me that Earth's Mightiest Heroes were quitters. "House of M" seemed like an elaborate what-if and drawn out well past its shelf date. "Civil War" had some real highs, but some real lows as well. I actually quite enjoyed "Secret Invasion" and "Dark Reign," although I know many on this board didn't, and I sympathize with their complaints.

But the relative creative success of Avengers is not the point. The undeniable commercial success is. And in retrospect, no matter what you or I or anyone thinks of Bendis's Avenging storylines over the last decade, they have added up to a remarkable achievement.

Avengers, which in the '90s flirted with cancellation numbers, is now (and will continue to be, despite Siege) four ongoing titles. The individual Marvel movies starring Iron Man, Thor and Captain America are being referred to -- even in Hollywood -- as "Avengers movies," with an actual Avengers film coming in 2012. An Avengers cartoon begins in the fall. That's pretty amazing.

Meanwhile, there's a lot of news on all these projects, so let me sum it up:

* The four current Avengers titles will be rebooted after Siege, and Marvel has released teaser art on three of them. This gives us five members of those teams, sorta. Avengers, according to these teasers, will star Captain America (Bucky), Spider-Woman, Iron Man, Hawkeye and Thor (and possibly others, as Marvel.com shows the Avengers as Captain America, Iron Man, Thor, Spider-Man and Wolverine). New Avengers teasers show Cage, Spider-Man, Wolverine, Jewel and The Thing. The other two teams are problematic -- Secret Avengers teasers are only silhouettes, leaving it up to us to figure out, and the teasers for Avengers Academy (if any) have yet to be released. (I will, of course, post them in Comics News should they be released.)

* A fifth Avengers title -- a miniseries by Bendis and Alan Davis -- is in the works, too. Avengers Prime: Siege Aftermath will be a five-issue, bi-monthly title starring Steve Rogers, Thor and Iron Man. The book is supposed to show how the Big Three iron out their differences -- which are extreme -- between the end of Siege and Avengers #1 but, unfortunately, won't conclude until almost a year from now. It will be interesting to see how Bendis digs himself out of the hole he's dug himself into. (Since Tony Stark has done some things that Cap and Thor should find almost unforgivable.)

* The new cartoon is called The Avengers: Earth's Mightiest Heroes, and stars the first six Avengers -- Captain America, Thor, Iron Man, Hulk, Ant-Man and Wasp. It debuts on Disney XD in the fall, and already has 52 episodes ordered, according to ICv2.com.

* Avengers the movie is scheduled for 2012, and according to IMDb.com, many of the actors in other Marvel movies will reprise their roles in it, including Robert Downey Jr. (Iron Man), John Krasinski (Captain America), Chris Hemsworth (Thor), Samuel Jackson (Nick Fury), Don Cheadle (War Machine) and Scarlett Johansson (Black Widow). Rumored appearances include Edward Norton (Bruce Banner) and Jeremy Renner (Hawkeye).

So credit where it's due: The Avengers franchise was in trouble before Bendis took over, but now has expanded to encompass much of the Marvel Universe -- and sales charts. We have to thank others for the success of Captain America (Ed Brubaker), Thor (J. Michel Straczynski) and Iron Man (Matt Fraction), but the timing of those strong title runs couldn't be better, and paint a very bright future for Avenging.

I'm tempted to end this post with "Avengers Assemble!" But, for heaven's sake, just about everybody in the Marvel Universe would show up!

Comment by Doc Beechler (mod-MD) on March 5, 2010 at 3:25pm
" It will be interesting to see how Bendis digs himself out of the hole he's dug himself into. (Since Tony Stark has done some things that Cap and Thor should find almost unforgivable."

Without spoiling it...Matt Fraction took a big step in the most recent Iron Man issue.

Comment by Doc Beechler (mod-MD) on March 5, 2010 at 5:02pm
I don't think he's leaving FF...just doing a Wolverine and taking more jobs in this tough economy.

Comment by Doc Beechler (mod-MD) on March 5, 2010 at 5:04pm
What Fraction did in Iron Man was something I thought you would approve of, Mark.

Comment by Doc Beechler (mod-MD) on March 5, 2010 at 9:38pm
Because seeing Steve, Tony, and Don together again is something a lot of fans, including me, want. Those characters, along with Janet, got me to send in allowance money for my very first comic subscription and I'm very excited about the upcoming series.

Comment by Captain Comics on March 5, 2010 at 11:18pm
I just can't believe that -- thanks to the cartoon -- a new generation of kids will know who Ant-Man is. Ant-Man! Comics truly are taking over the world.

Comment by the_original_b_dog on March 6, 2010 at 1:06am
Is the Ant-Man movie no longer a part of the Avengers mix? I thought it was at one point.

John Krasinski hasn't been cast as Captain America...at least not yet. He was one of six or so names that was mentioned as being screen tested in the past couple of weeks, and his was the name that generated the most buzz, but nothing's been decided yet.

Comment by John Dunbar on March 6, 2010 at 1:15pm
As a long time fan of the franchise, I'm happy to see the Avengers doing so well. The Bendis stuff isn't for me, but I'm glad it is there for people who enjoy it, and selling in the number it does. I'm 50/50 on the relaunch, as I'll be checking out Secret Avengers by Ed Brubaker and Mike Deodato, as well as Avengers Academy, but passing on the two Bendis books.

I'm kinda surprised by some of Cap's comments. I think the Avengers hit the height of their popularity in the 1970's, as the Fantastic Four was never quite the same after Jack Kirby left. The X-Men, of course, started their unmatched dominance in the late 70's, and were the top of the heap for the 80's and 90's. Creatively, the Avengers, imo, were in good hands with Roger Stern for several years in the 80's. The period after Stern until the late 90's relaunch with Kurt Busiek and George Perez may not have been the best of times, but I'm surprised to hear the book hovered at near-cancellation levels at times.

Speaking of Busiek and Perez, I was surprised you skimmed over that era, Cap. For a while, Avengers was Marvel's top selling title with this creative team. Sure, there was a bit of a decline after Perez left, but it was still a fairly solid title, that sold well. After Busiek left, the decline was more noticeable. Geoff Johns followed, and to my surprise at least, he seemed to be a poor fit for the book. This was in the midst of the Bill Jemas era, and it has always been my theory that Johns chafed in the era of "everything must be written for the trade". Johns was followed by Chuck Austen, who, imo, wrote some of the worst stories in the history of the franchise.

Comment by Captain Comics on March 6, 2010 at 2:02pm
I did skim over Busiek/Perez, John, which was successful for the time. But, despite relative success, it wasn't the spectacular growth of the Bendis era (four titles, which was unimaginable before "Disassembled"), and mentioning it didn't add or detract from my central point, so I considered it an irrelevant digression.

But thanks for mentioning it, because Busiek and Perez cannot be mentioned enough!

The near-cancellation numbers were prior to that -- late '80s, early '90s, when books like Captain America and Thor were in serious trouble. I'd have to look up exactly when, but I remember one afternoon checking the Marvel numbers and realizing with a start that a couple of Avengers titles were near or at where Marvel usually axed books.