Age of X, X-Men Legacy 245-247 and New Mutants 22-23, 2011: I’m a sucker for good alternate universe stories and Age of X is one of the best. Mike Carey takes the Utopia setting to its dystopian, violent extreme. The island is an armed fortress from which the X-Men repel an invasion day after day every day for a thousand days. They’re living in a warzone; they’re mentally and emotionally exhausted. But there’s something sinister under the surface. There are hidden rooms deep in the heart of the fortress and prisoners that no one is allowed to see. The situation begins to unravel when Katherine Pryde returns from the outside world with a roll of blank film. Rogue, Gambit and Magneto delve into the mystery while Cannonball and Moonstar try to stop them. Is it an illusion? A dream? Or something worse? Age of X is an intense, compelling story featuring unusual and unique takes on many of our favorite X-Men. 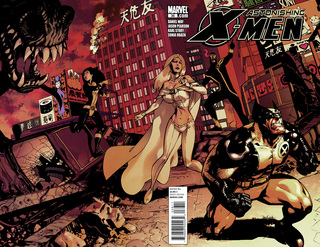 en stories. Way takes half of the team to Japan where they end up fighting escapees from Monster Island. This fun tale includes amusing nods to classic monster movies like Godzilla as well as cameos by classic Marvel monsters like Fin Fang Foom. There’s also a strong emotional heart as Armor is torn between her loyalty to her biological family and the X-Men. Gage takes the other half of the team into outer space where they encounter yet another invasion from the Brood. But, this time, there’s a twist. Instead of killing the Brood, they have to save them from extinction. There’s some great internal conflict as the X-Men debate whether the Brood are worth saving. Plus, this story introduces the “deformed” Broodling born with undesirable traits like compassion. Broo, who winds up in Wolverine & the X-Men, is a fun little addition complicating both the mission and the moral confidence of the X-Men.

Point One, Uncanny X-Men 534.1, 2011: It’s a lost art form but I’m glad to see that there’s still a place for an excellent done-in-one story. Penciler Carlos Pacheco joins Kieron Gillen for this instant classic. Magneto has been a member of the X-Men before and he rejoined the team when they relocated to Utopia. But the world didn’t know about this development until now. With the secret out, the X-Men have to deal with the fall-out. More importantly, Magneto has to decide what kind of a person he wants to be. Is he willing to eschew the morally ambiguous methods he employed in the past? Is he ready to become a hero? Why would he even want to? This point one story is a wonderful character examination that includes some huge ramifications for the entire team without resorting to pat answers.

Welcome to the Jean Grey School for Higher Learning, Wolverine & the X-Men 1-3, 2011: Do you know what I love about this series? It’s fun! Jason Aaron wasn’t exactly known for his sense of humor on Wolverine or Scalped but he brings the funny to his new X-Men ongoing. In this opening arc, Wolverine has rebuilt the Xavier Institute and renamed it the Jean Grey School. However, before he can officially reopen the school, he has to pass the New York Board of Education inspection. Of course, this being the X-Men, the inspection isn’t going to go smoothly. Before the day is out, they’re attacked by the new Hellfire Club and Krakoa, “the island that walks like a man.” Iceman, Beast and Wolverine take turns dishing the one-liners and Jason Aaron takes no time in dialing up the ridiculous situations. It’s like a mad farce with miniature Nightcrawlers. Chris Bachalo is the perfect artist for this series. His stylized approach adds to the mayhem yet he’s strong enough with the details to capture the necessary facial expressions. I also love the quick pace. Jason Aaron eschews the now outdated six-issue arc and runs through the opening story in double time, which only increases the frenetic energy.

Tabula Rasa, Uncanny X-Men 5-8, 2012: This is arguably Kieron Gillen’s best arc on Uncanny X-Men and ironically it’s more like a Fantastic Four story than something you’d associate with the X-Men. A rural part of Montana has been cut off from the rest of the world by a giant dome and the X-Men have been invited to investigate. Despite his recent isolationism, Cyclops agrees to intervene- partly at Psylocke’s urging. The X-Men penetrate the dome and discover a world that’s been on evolutionary fast-forward. Gillen toys with evolutionary themes, holding a fun-house mirror up to the X-Men and their own ongoing conflict with humanity. In grand comic book tradition, he also splits the team into smaller squads. The unusual pairings (Sub-Mariner and Hope!?!) and the insightful character interaction highlight this excellent arc.

To Love and Die in New York, Astonishing X-Men 48-51, 2012: For some reason, Marvel stopped assigning story titles to some of its, um, stories and titles. That’s okay- it means I get to come up with my own (as I did for Wolverine & the X-Men). In this case, I chose a title that captures the essence of Marjorie Liu’s opening arc. Wolverine has put together a new action team of X-Men in New York City. Gambit, Iceman, Karma, Northstar and the new Warbird join him in a battle with a new team of Marauders. There’s a lot of fast-paced action and collateral destruction. However, there’s a lot more going on than yet another superhero fight. The X-Men pick up on clues that the Marauders aren’t acting of their own volition so there’s a mystery to unravel. Yet, more than that, there’s a second interconnected story. Northstar’s boyfriend Kyle has moved to New York as well. He tries to be a bigger part of Northstar’s life and is nearly caught in the crossfire. Northstar tells Kyle that it’s too dangerous which Kyle takes as a dismissal but Northstar’s apology turns into a wedding proposal. The story made a lot of headlines but I was more impressed by its emotional complexity and depth. Northstar’s profession of love for Kyle is wonderfully well written, especially the part where he tells Kyle that Kyle helps him feel normal.

Well, that’s my top twelve X-Men stories of the past 4 years. But that doesn’t mean I’m done. Come on back next time for my honorable mentions- enjoyable stories that, for one reason or another, didn’t quite make the cut.

Thanks for writing these, Chris. I'll keep them in mind as I'm browsing the cheap trade paperback tables at NYCC.

Thanks for commenting, Rob.  I'm glad that someone is a) reading these and b) finding them helpful.

Oh,definitely. The X-Men is something I can only afford to dabble in VERY sporadically. So reviews count a lot with me. And overviews like this are gold!