The Brave & The Bold TV Show Is Back!

The Brave & The Bold is back on tv. I liked how the episode had featured an entirely new character. Hoe there are a few more episodes like it. Meanwhile....(as they used to say in DC comics), it is time once again, folks to say who I would like to see appear on the show:

To name a few.

What are your choices?

Do you think that Marvel comics should turn past titles such as Marvel Team-Up or Marvel Two-In-One into tv shows?

Comment by PowerBook Pete, the Mad Mod on March 28, 2010 at 3:45pm
Captain Marvel, Black Adam, and Sivana are supposed to be in the next episode.

I think a Spider-Man team-up show could be a fun way to show off more characters. Comment by Julian Gift on March 28, 2010 at 8:18pm
A spider-man team-up will be interesting to see. I think that a few guest stars could be the 3-D man (the original and follow-up), Captain Ultra, spider-man(Ben Reilly), Stan Lee, Forbush Man, Great Lakes Avengers, Deadpool and Rick Jones. To name a few.

Comment by Eric L. Sofer on March 29, 2010 at 7:34am
I suspect that - if they can afford the rights - a brief span of Super Hero Squad could easily be a Spider-Man team-up test vehicle. The main issue is that Marvel Team-Up is not really like Brave and the Bold - Spidey could certainly team with any number of heroes, but how many different stories are there, really? DC stories are KNOWN to go far and away. Marvel stories tend, even with the fantastic, to stay somewhat more grounded in reality. Batman in space? B&B makes it work. Now imagine it with Spider-Man... not so much. Aside from a run of MTU where Spidey went back in time to the 1600s with the Vision and the Scarlet Witch (and Dr. Doom) and then overshot his return to visit Killraven and then Deathlok, and a weird story where he teamed up with King Kull, he just hasn't done a lot of time travel. Space travel? A team up with Warlock, and Marvel Two-In-One annual number 2 are the main ones that come to mind.

I'm not saying it wouldn't work; I'm saying I don't know if it's a good episodic feature (as was shown with the previous Spider-Man show; you can't watch just one episode because they are all related to a bigger story.)

Comment by Horn'd One on March 29, 2010 at 9:32pm
I taped the episode, because I was away at I-CON 29 for that weekend. Having Kevin Conroy as the Batman of Zurr-Enn-Arr was just too cool.

Comment by Julian Gift on March 30, 2010 at 5:19am
I think that Marvel comics could make it work. Look at their Fantastic Four stories. The imaganauts go far and away when it comes to having amazing adventures.

I like the reversed color scheme, but part of me was widhing for the Green 'n' Gold Captain Sivana. 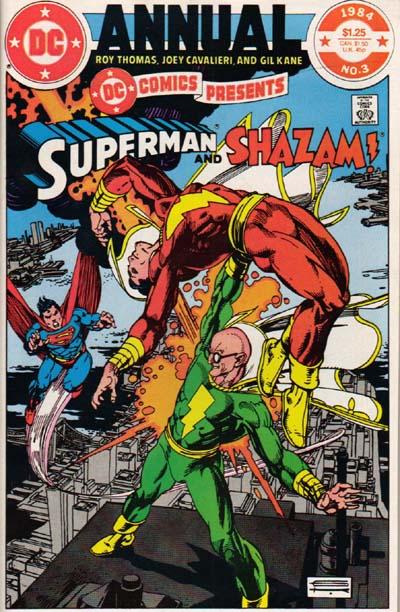 Comment by Julian Gift on April 3, 2010 at 10:36pm
Pity that Hoppy the Captain Marvel bunny and the Lt. Marvels could not appear on the show.