Although published by a comic-book company and appearing each Wednesday with the weekly shipments of comic books to comics shops (hence its name), Wednesday Comics ($3.99) isn’t really a comic book. It’s more like the Sunday funnies, with 16 full pages at 14 inches by 20 inches on unbound, color newsprint, folded up to be displayed and sold at roughly comic-book size.

And within – oh, the glorious innards. It’s the Sunday funnies as you remember them, only better.

Wednesday Comics features 15 ongoing, full-color adventure strips, with one whole page devoted to each, like “Prince Valiant” back in the day. And that strip, long revered for its quality, now has some competition. Contributors include the famous Neil Gaiman (Coraline), writer of best-selling, award-winning everything; Joe Kubert (the original Sgt. Rock and Hawkman artist) and his son Adam; Kyle Baker (The Cowboy Wally Show, Why I Hate Saturn); Paul Pope (Heavy Liquid, 100%); Brian Azzarello and Eduardo Risso (100 Bullets); Dave Gibbons (Watchmen); and, as they say on TV, still more.

And what are these folks doing? All kinds of things. Superheroes are well-represented, as you’d expect, with Batman, Superman, Flash and Hawkman in pretty straightforward adventures. But Metal Men, Supergirl and Metamorpho are superheroes played more for laughs, with Deadman falling more in the suspense/horror category. Other genres are represented, including war ("Sgt. Rock"), science fiction ("Kamandi, the Last Boy on Earth"), and the dreamlike “Adam Strange,” which seems like science fiction, and is an homage to “Flash Gordon,” but may be an homage to “Little Nemo in Slumberland” also. And there’s whatever the Catwoman/Demon strip is, a “team-up” between a sassy thief and a horror character.

I should mention also that with so many concepts and so many creators, you can expect a lot of variety in styles as well. “Green Lantern” seems to be going for a ’50s Right Stuff feel, while “Teen Titans” shows a manga influence. “Sgt. Rock” is all gritty war drama, while “Supergirl” is just cute as a button, with the Maid of Steel chasing Krypto the Superdog and Streaky the Supercat through a swath of playful destruction. A little something for everybody.

My only complaint is that Wednesday Comics is not actually in newspapers across the land, where it would hit the hands of kids of all ages. It’s a 12-issue, weekly event that runs July 8 through Sept. 23, and is available mostly (if not only) in comic shops.

So you may have to seek it out. But if you do, buy an extra one – because you’ll have to share. Everybody wants to read the funnies! 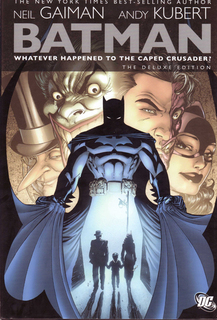 Speaking of Neil Gaiman (and Batman) …

As I mentioned in a previous review, Action Comics and Superman took a break in 1987 while the Man of Steel was being revamped. To end the previous several decades of Superman stories, legendary author Alan Moore wrote the last Superman story – well the last story of THAT Superman, if you get my drift – called “Whatever Happened to the Man of Tomorrow?”

Something similar just happened to the Dark Knight, where Batman and Detective went on hiatus while Dick Grayson (the former Robin) took over (while Batman is believed dead). It’s a sea change for the Bat-books – with not only a new Batman but a new Boy Wonder, and several new titles -- so DC repeated the Superman idea, with a recent two-part story, “Whatever Happened to the Caped Crusader?”

Which is now out in hardback, titled Batman: Whatever Happened to the Caped Crusader: The Deluxe Edition ($24.99). Gaiman takes a stroll through the many eras of Batman, and it’s fascinating because it’s Gaiman. Artist Andy Kubert does his best to mimic the many artists of those many eras, to excellent effect. And, as a sweetener, four other Gaiman-scribed Bat-stories are reprinted.

Which naturally leads to – you guessed it – the release of Superman: Whatever Happened to the Man of Tomorrow: The Deluxe Edition ($24.99). It includes that two-part story – a climax to several decades of Superman plots and subplots – plus two of Alan Moore’s most famous Super-stories, “The Jungle Line” and “For the Man Who Has Everything.” If you haven’t read these stories, you really, really should. And even if you have, finally getting them in hardback is pretty spiffy.