On Aug. 30, comic-book fans, some in costume, will line up in front of Midtown Comics in New York's Times Square. It's a party, although some fainthearts fear it will be a wake. 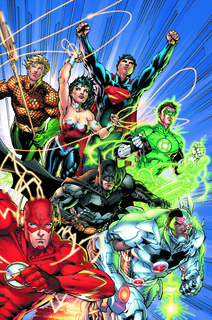 The occasion is the release of Justice League of America #1, by writer (and DC Entertainment Chief Creative Officer) Geoff Johns and artist (and DC Co-Publisher) Jim Lee. That title begins the replacement of DC’s entire superhero line of comics; it’s one of 52 new titles, all starting at #1, the remaining 51 all launching in September.

Comics fans and the mainstream media have been talking about this for months. By necessity, when DC released its September solicitations to comic-shop retailers two months ago, the Catwoman was out of the bag. (And, yes, there is a new Catwoman #1 in September, thanks for asking.)

Predictably, the Internet broke in half. Many comics fans, like many ordinary people, fear change.  There was much hair-pulling, teeth-gnashing and exploding of heads. After all, nobody believed DC’s official explanation for the re-launch, which was some sort of corporate-speak boilerplate that I don’t even remember. “What awful future,” some fans wondered, “does this massive re-launch portend?”

To quote the Sage of Highland, Texas: “Settle down, Beavis.” Seriously, it’s not the end of the world, nor even a serious omen. Titles get canceled and re-launched all the time. For example, Marvel recently canceled the old Hulk title to publish Incredible Hulk #1 in October, the third or fourth comic book to bear that name and number. Ditto for Daredevil #1, Moon Knight #1 and Punisher #1, all launched at Marvel in the last several months to replace previous versions. What’s unusual here is that DC is renumbering 52 new titles simultaneously, just to get people talking. Which is obviously working.

Also, DC emphasizes this isn’t a re-BOOT, but a re-LAUNCH. That means titles that are already working well – read: the Batman and Green Lantern franchises – will continue as if nothing happened, just with new numbering. But DC will take the opportunity to fix a few things that they think are broken.

Surprisingly, one of them is Superman. They are re-booting the Man of Tomorrow, making him once again the first superhero on the planet (which hasn’t been the case since the 1980s), but one that has only been around for about five years. He isn’t married to Lois Lane any more (they’re not even dating … yet), and the rest of his status quo has been tweaked. For example, Ma and Pa Kent are dead, and his costume doesn’t have the red briefs any more.

One other change has some fans fuming: When DC says it’s rebooting all of their superhero titles, that includes the two oldest in America. Action Comics, which just reached issue #904, is now reverting to #1. And Detective Comics, the 1937 title that gave DC its name, is also re-setting the odometer. Although Detective will remain essentially unchanged, the new/old Action has a purpose: It will show Superman’s first five years in public, to explain the current status quo, which is depicted in sister title Superman, launching with a new #1 Sept. 28. (Justice League is also set in the past for now, showing how the team got together.)

Another change is more diversity in the DC lineup of heroes, most of whom were created as interchangeable Generic Square-Jawed White Guys in days of yore. Cyborg, an African-American, will now be a founding member of the JLA. Other characters of color, like Batwing (African), Blue Beetle (Hispanic) and the new Atom (Asian-American) abound. Nor is the LGBT community ignored; Batwoman features one of DC’s many lesbian crime-fighters, while Apollo and Midnighter, stars of Stormwatch, are a gay couple.

And the last big change is that DC will release digital issues of their comics “day and date” – that is to say, at the same time the print versions hit the comic shops. I’ve heard differing views from various retailers about how good/bad this is, but for now it seems irrelevant, since the digital copies cost the same as print, and therefore shouldn’t cannibalize sales.

But it will position DC for the future, when digital is expected to become more important. And if there’s any lesson here, that’s it: The future is coming, and there’s no use fighting it. Let’s embrace the new DC as we did the old one, and see what the tomorrow’s Man of Tomorrow brings.

1. The revamp of the Justice League replaces Martian Manhunter with the African-American Cyborg as a founding member. Courtesy DC Entertainment Inc.

2.The new Action Comics will tell the tale of Superman's first five years in the public eye, where his initial costume is jeans and a T-shirt. Courtesy DC Entertainment Inc.

3. According to DC, Batwoman is the first eponymous title for an LGBT superhero. Courtesy DC Entertainment Inc.

Comment by Oric on August 24, 2011 at 9:43pm
I didn't realise that they were reviving the Ryan Choi Atom

Comment by Philip Portelli on August 25, 2011 at 1:08am
His "death" was a major storyline in Titans. I'm guessing now not so much!

Comment by Cavaliere (moderator emeritus) on August 25, 2011 at 1:30pm
I am super excited about this. Excited enough to attend a midnight opening? Well, no. But I may buy the digital version of Justice League at midnight even though I've pre-paid for it at the LCS.

Just as many modern-day Hollywood would-be blockbusters have theater dates set before shooting even starts , and have outdoor display ads a couple months before their release that give no MPAA rating because it has not been determined yet - because the movie companies have not , at the time the ad was set , come up with a complete edit to submit to the MPAA . that's why !!!!!!!!!!!!!!!!!!!!! - Modern-day funnybooks , weeelllll... , why do we have so many titles in which the art is split between two different artists/teams , each doing 10-12 pages or so ?

Because the comic book was put together so close to the final printing date that it was nessecary to get two teams on it , that's why !!!!!!!!!!! I would assume , anyway .

I see the endless monthly schedule as the rack which has been torturing your beloved heroes for the last several decades.

All that time, and they never found a more ... dignified ... way to present these icons at their best.

Comment by Doc Beechler (mod-MD) on August 26, 2011 at 1:41pm
"All that time, and they never found a more ... dignified ... way to present these icons at their best." With the third Nolan Batman, the new Amazing Spider-Man, and Joss Whedon's Avengers out next summer...I agree with Grant Morrison, the superhero now belongs to film, not comics.
.