There’s nothing quite like a comic book legacy. I enjoy watching the passing of the mantle from one character to another. I admire the interaction between different generations and appreciate the contrast in characters. I know I’m not the only one. Comic book writers often invent legacies for characters that didn’t previously have them. They introduce predecessors, distant ancestors and futuristic descendants. Comic book legacies create a sense of history, of epic scale, of continuity. Here is my list of the best legacy characters in comic books. Your list is probably different. Heck, my list would probably be different if I wrote this article again in a couple of months. But read along anyway and enjoy these reflections about the greatest comic book legacies.

15. Jaguar: The first Jaguar showed up in the Silver Age from Archie Comics. He wore a red suit with Jaguar stripes and his adventures mirrored the Superman stories at the time. In the early ‘90s, DC leased the Archie heroes and introduced a new teenaged, female, Hispanic Jaguar. The diversity replacement doesn’t always catch on with fans but in this case, the new Jaguar was more memorable than her predecessor. The newest Jaguar debuted this year from Archie’s Red Circle comics. Although she has a different name- Ivy Velez- she’s clearly modeled on the DC reincarnation.

14. Atom: The Golden Age Atom is not a great character (despite the fact that we share an alma mater in Calvin College). He’s a short guy with a chip on his shoulder. But the name was too good not to be used again. Ray Palmer became the second Atom, complete with shrinking powers and a cool new Gil Kane costume. In recent years, Chinese immigrant Ryan Choi has worn the mantle. Before that, Adam Cray went by Atom while a member of the Suicide Squad. With four successors, including Atom Smasher, Atom is one of the longest legacies in comics.

13. Wonder Girl: It’s not often that a spin-off character has their own legacy but Wonder Girl is the wonderful exception. Originally, Wonder Girl was a teenaged Wonder Woman. However, once the character joined the Teen Titans, she needed an identity of her own and Wonder Woman’s little sister Donna was introduced. Her origin was rewritten over the years, sometimes de-emphasizing the family connection and sometimes re-establishing it. In the 1990s, a new Wonder Girl, Cassie Sandsmark, took on the name. She was one of the stalwarts in Young Justice and eventually the Titans. The two Wonder Girls have often fought side by side, though the older Donna now goes by the name Troia.

12. Black Widow: Stan Lee often re-used Golden Age names with tenuous or even non-existent connections to the original character: Angel, Daredevil, Vision, and so on. The original Black Widow was a mystical avatar of revenge, the new Black Widow a Russian super-spy. But at the turn of the century, Devin Grayson and Greg Rucka introduced a true legacy for the Black Widow. Natasha Romanoff’s former bosses in the spy world reclaimed the moniker and gave it to a new agent, Yelena Belova. The clashes between the two spies served as the impetus for several excellent mini-series and made Black Widow one of the few, great female legacies.

11. Phoenix/Marvel Girl: The other day, I was explaining the concept of legacy characters to my daughter (she was reading Iron Fist over my shoulder and wanted to know why there was more than one). She immediately assumed that legacy characters were related to one another. That’s not always the case. But sometimes its true that mantles are passed from one generation to the next. In this case, Jean Grey’s daughter from a future timeline took her mother’s name, powers and place on the X-Men. Rachel Grey was the second Phoenix and one of my favorite heroines. Later one, she called herself Marvel Girl as a further tribute to her mom.

10. Human Torch: The Human Torch is one of the most successful legacy characters in comics. The original Human Torch was a Golden Age android who went by the name of Jim Hammond. When Jack Kirby and Stan Lee reintroduced the character in the Silver Age, they gave the powers to a human teenager named Johnny Storm. Johnny quickly surpassed the original as a member of the Fantastic Four and occasional solo star. Later writers like John Byrne explored the connection between the two characters, building on the golden legacy of the Human Torch.

9. Grendel: Legacies are usually reserved for Marvel and DC, companies that have been around for 70 years or so. Plus, they tend to be passed down from hero to hero, not villain to villain. But every once in a while, an excellent legacy is crafted for a new character. Matt Wagner created the villain Grendel for Comico. However, he promptly killed the original Grendel, Hunter Rose, and passed the legacy on to Hunter’s granddaughter Christine Spar. The new Grendel was more of an anti-hero than a villain. She was also the beginning of a long line of Grendels over the years, each one straddling the line between good and evil in a different way.

8. Hourman: Hourman is a pretty typical legacy character but, in this case, that’s a good thing as it’s a name that easily comes to mind when thinking about comic book legacies. The first Hourman, Rex Tyler, was a second-tier star in the Golden Age. His son, Rick Tyler, took the name (and wore one of the worst costumes in history) in Infinity Inc. The name passed to a futuristic android at the hands of Grant Morrison and Tom Peyer. Then, it finally returned to Rick Tyler (in a much better costume) as he joined Geoff Johns’ new JSA.

7. Captain Marvel (Marvel): Captain Marvel is one of the most used names in comic books, however most of those occurred at different companies and have no direct relation to one another. The exception is Marvel’s long line of Captains. The first was the Kree warrior, Mar-Vell, who turned against his own race to defend his adopted home of Earth. The second was New Orleans native Monica Rambeau who could transform her body into light. Mar-Vell’s children Genis and Phyla took their turns with the mantle. The newest Captain Marvel is Carol Danvers, the former air force officer and Ms. Marvel. With so many different characters claiming the name over the years, Captain Marvel is one of the most diverse legacies in comics.

6. Blue Beetle: There are three Blue Beetles. Each one debuted at a different company, yet they remain connected. The first Blue Beetle, Dan Garrett, was a standard Golden Age superhero with a mystical artifact. The second Blue Beetle, Ted Kord, was his Silver Age replacement, turning to gizmos and gadgets instead of magic. The third Blue Beetle, Jaime Reyes, is the current bearer of the title. He wears an alien super-suit that speaks in a language only he can understand. Each Blue Beetle has a distinctive look and role, making the Blue Beetle one of the more interesting legacies in comics.

4. Green Lantern: I doubt that any name has been passed around in comics more than Green Lantern. Alan Scott. Hal Jordan. Guy Gardner. John Stewart. Kyle Rayner. Jennie-Lynn Hayden. And that’s just from Earth! Numerous heroes and heroines have worn the ring and the lantern insignia with distinction as part of the intergalactic police force, the Green Lantern Corps. There’s a Green Lantern for every generation and every personality.

3. Robin: It’s amazing to think about all of the characters who have worn Robin’s cape and tights over the years, especially considering that the original Robin held on to the name for almost 50 years. Dick Grayson was the original Robin, but he now goes by Nightwing. Jason Todd took his turn, though he’s now the Red Hood. Tim Drake claimed the mantle. Stephanie Brown, aka Spoiler, wore it for a brief time. Carrie Kelley was the Robin in the future setting of The Dark Knight Returns. And Bruce Wayne’s son Damian is the current namesake. Robin got a late start as a legacy, but it has quickly grown into one of the greatest. 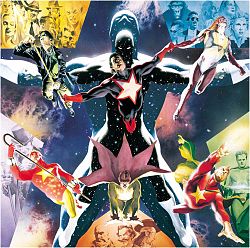 2. Starman: Starman is the definitive legacy character. It’s a classic name yet, for a long time, it wasn’t attached to a great character. Ted Knight was a solid second-tier superhero in the Golden Age but in the ‘70s and ‘80s the name was passed on to several characters who had no relation or connection to the original. Then, in 1994, James Robinson introduced a new Starman: Jack Knight, the rebellious son of the first Starman. In a modern classic, Robinson tied all of the various Starmen together in an intricate tapestry that spanned space and time. Robinson showed the depths that could be explored in a great legacy character, blazing a trail for many others. 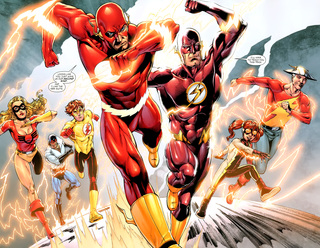 1. Flash: The Flash is the first and greatest legacy character. Jay Garrick was the original Flash, a Golden Age speedster who wore a Hermes inspired helmet. In 1956, editor Julius Schwartz commissioned a new Flash. The character was completely transformed. Barry Allen worked in a police crime lab, gained powers through a scientific accident, and wore a sleek red costume with yellow lightning highlights. The character quickly caught on and is credited with launching the Silver Age. Barry and Jay then met each other in the classic story, Flash of Two Worlds, which introduced the idea of the multiverse. Yet the legacy of the Flash didn’t stop there. Barry’s nephew, Wally West, took over the costume in 1986. Wally proved to be a popular replacement as Mark Waid expanded on the character’s powers with the addition of the Speed Force and the character’s legacy with the introduction of Max Mercury and Impulse (who would go on to become the fourth Flash).

Good article, Chris. I think the Grendel legacy is interesting, because some times it seemed like they used the Grendel name to sell a title and it would just be some different genre comic. Like a war or sci-fi story with like one dude wearing Grendel looking face paint. Other times they expanded it into a religious type following.

Starman was one of my all-time favorite stories (one of yours to I believe), and what James Robinson did with that series and character. Tying them all together into one large tapestry was just so great. I am often irritated by the "It's A Small World" universe comic book characters live in, but here he really made it work.

Another one I would mention is that I've also enjoyed the different Wildcats we've had over the years.

Was she Air Force?  I thought she was a Navy pilot but I could be wrong.

Another one I would mention is that I've also enjoyed the different Wildcats we've had over the years.

Ana suggested Wildcat but he wouldn't have made my list.  The two I could have included were Ant-Man and Firestorm.  I (figuratively) hit my forehead after Ana mentioned Ant-Man.  Of course.  The Henry Pym-Scott Lang legacy is pretty cool, even before you add in the current Ant-Man.  As for Firestorm- I had thought about him when I first conceived of the list and then forgot about him when actually writing the article.  But Jason Rusch is a great Firestorm, and I appreciate the lineage from Ronnie Raymond through Pozhar and all the rest.

Thanks for the correction, Tim.  I'll fix the article accordingly.