June 29, 2010 -- You’d think a series named The Killer would be action-oriented, but it’s about conscience -- one of the many surprises this series of graphic novels offers. 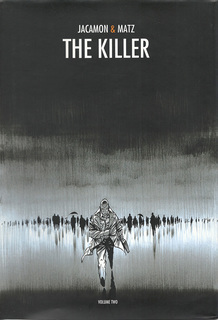 The title character is a hit man, and it’s his conscience that we’re exploring. We meet him in a hotel room as he waits for his target to show up (The Killer Vol. 1, Archaia Press, $19.95). As he lies in wait for days he thinks, and we’re privy to those thoughts. We become very familiar with him, almost comfortable with him. Despite his obvious sociopathy. Despite his mind unraveling under the strain. Heck, we even begin to relate to him.

Which is the writer’s intent. “Matz” (real name Alexis Nolent) has said in various interviews that he wonders about people who do terrible things, like the Holocaust and Darfur, and what they think, and what their lives must be like afterward.

“A hit man is a figure that allows dealing with such matters in a non-apologetic, non-judgmental way,” Matz told Newsarama.com in 2007, “and therefore allows us to tell a story that relies on his state of mind as well as his actions.”

Matz has mentioned that he originally intended The Killer to be a novel, but it’s immediately clear that he made the right decision going with a graphic novel. Our protagonist is the close-mouthed sort, but he’s always thinking, and usually thinking about things unrelated to the things he’s doing – which, as noted, are usually appalling.

Originally published in Europe, The Killer is being reprinted in the U.S. by Archaia Press. The Killer Vol. 2 ($24.95) was published recently, and shows our protagonist becoming less isolated, with “colleagues” and a family of sorts. That threatens to break through the Killer’s self-protective mental armor just as he’s beginning to discover the downside of his profession.

And all the while he’s thinking, and you’re there with him. He’s just a guy who wants to make enough money to retire quietly. A guy who doesn’t see anyone else following the rules, and doesn’t see the need to follow them himself. A guy who makes perfect sense – until he pulls the trigger.

The story is ably abetted by artist Luc Jacamon, whose art is influenced by the Franco-Belgian school. The colors are often muted, generally pastels, that make The Killer seem friendly and normal … until he’s not.

Yes, The Killer is a terrible man. But you’ll grow fond of him despite yourself. And that’s disturbing, too.

Creepy Archives Vol. 6 (Dark Horse, $49.99) is often horrible, and not in the good way a collection of horror stories should be. 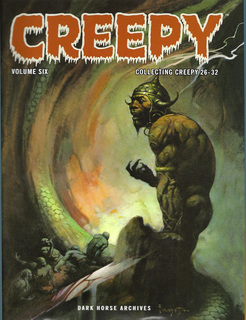 Creepy began in spectacular fashion, essentially re-creating the format and feel of the legendary EC Comics (often with some of the original artists, like Frank Frazetta and Wally Wood). But in the late 1960s Warren Publishing suffered financial setbacks, and it shows in these reprints from 1969-70.

I almost quit reading with the story “Barbarian of Fear” (from Creepy #27) by writer-editor Bill Parente. This sword-and-sorcery effort had inane word salad like “muted vision” (an oxymoron), muscles that vibrated instead of tensing and a “smote of lightning bolt.” I’m guessing it was supposed to read like Conan the Barbarian, but came out like a Mad parody instead.

There are some bright spots, like early work by artists Ernie Colon and Tom Sutton, plus stories by the then-young Don Glut, plus one amazing Frazetta-Harlan Ellison-Neal Adams collaboration. And there’s the occasional reprint from the glory days of writer-editor Archie Goodwin and his bullpen.

But those are mostly buried in an avalanche of mediocrity by artists like Tony Williamsune (actually Tony Tallarico and Bill Fraccio) and Jerry Grandenetti, and stories by names never seen before or since. Even the editing is poor, with numerous misspellings (i.e., “core” instead of “corps”), malapropisms (“legendary” used as a noun) and flat-out errors (a story credited to Reed Crandall that was drawn by Sutton).

I don’t usually slam a book this hard, because I know everyone involved was doing the best they could. And who knows what time or money constraints they faced?

But many of these stories are just amateurish. They aren’t even as professional or mature as those in the mystery anthologies published contemporaneously by DC and Charlton, which were aimed at a younger audience.

The good news is that Warren got better in the 1970s, so these Archives will improve, too. Maybe Creepy Archives Vol. 7 will make me forget Vol. 6!

Tony Tallarico is the guy who brought us Dracula as a superhero, right? I'm not surprised he's using a pseudonym after that.

For some reason, though -- probably a fondness for the old House of Mystery/Secrets stories I read as a kid -- I've always had a soft spot for Jerry Grandinetti's distintive art style. His characters always seemed sweaty and desperate to me -- which usually worked for the stories I read by him. But even so, I'm not likely to pick up any Creepy collections until I get much, much deeper into the EC books.

Comment by Jeff of Earth-J on July 1, 2010 at 2:58pm
I've given up trying to stay current with Creepy and Eerie archives, but tracy keeps on pluggin' along... complaining every step of the way that they're not ECs!

Comment by Travis Herrick (Modular Mod) on July 1, 2010 at 3:48pm
I read the first few single issue of The Killer when they first came out, and then I think my LCS forgot to pull it for me, plus they were an awkward size that made them hard to store. Now, I'll probably just pick up the collections. Thanks for the reminder, Cap.

I am with Rob, on Jerry Grandinetti's art. I was even of the opinion that when he took over the art chores on The Spectre series from Neal Adams, his art was better. It looked more magical, and chaotic. Plus like Rob, said the people trying to get away from the Spectre really looked scared to death.

Comment by Travis Herrick (Modular Mod) on July 1, 2010 at 6:26pm
Yeah he did a handful of issues for the late '60s series before it got canceled. I really liked his, I dunno what you would call them, magicscapes, cosmic backgrounds? I reviewed a few of them on my "A Comic a Day" thread on the old board.