May 14, 2013 -- When a movie makes nearly a billion dollars worldwide in a week, and has the second highest opening weekend in U.S. history, it’s worth a second column. So even though I wrote about The Mandarin in Iron Man 3 last week, I’m still getting questions about Tony Stark and his armored alter ego. Let’s answer a few:

Q: If Iron Man 3 had the second highest opening weekend in history, what was the first?

A: OK, I added that question myself, since I was taught in journalism school that you never raise a question without answering it. The answer is Marvel’s The Avengers, which also had Robert Downey Jr. in it as Iron Man.

Q: Various people get to wear armor in Iron Man 3. Is that true in the comics as well?

A: Absolutely. Stark’s best friend (and often his conscience) Jim “Rhodey” Rhodes began substituting for a disabled Stark back in the ‘80s, before getting his own armor, called War Machine. Other characters have subbed for Iron Man over the years, too, including ex-boxer Harold “Happy” Hogan, played by Jon Favreau in the movies.

Speaking of Rhodey, he dons the Iron Patriot armor in Iron Man 3, which is more convoluted story in the comics. The Iron Patriot was only worn by Norman Osborn, the original Green Goblin, when he was (temporarily) in charge of U.S. security and fielded his own Avengers team with super-criminals masquerading as the actual Avengers. (Long story.) So that particular armor isn’t worn by anybody any more.

Meanwhile, Virginia “Pepper” Potts has her own suit of armor in the comics, which she has named “Rescue.” It has no armament at all – it’s used for, as the name implies, search and rescue missions.

Q: There were a lot of different armors in the movie. Are they all from the comics?

Tony Stark does have a lot of different armors in the comics, not only various versions over time, but armors designed for specific tasks. Only a few of the movie armors were specifically named – and none of those exist in the comics with those names. But going by appearances, there may be some overlap.

For example, Stark uses some stealth tech in Iron Man 3, which has been the basis for whole suits in the comics. The first, all-black “Stealth Armor Mark I” debuted in 1981, leading up to the “Mark IV,” introduced this year. The various stealth armors have used holograms, ceramics, carbon composites, plastics, camouflage generators and other techniques to make Iron Man invisible to radar, electronic detection systems and even the naked eye. The downside is that most of the Stealth armors are virtually without weapons, because every conceivable space is crammed with electronic counter-measures.

Other, unnamed armors in the movie may mimic some of the more esoteric Iron Man suits, like the “Hydro Armor” (designed for deep-sea rescue) and the “Arctic Armor” (which can withstand incredibly low temperatures).

Some of the movie armors have been named, primarily on the Iron Man 3 Facebook page (facebook.com/ironman). There’s an “Unlock the Armor” game that helpfully names and shows six different suits from the movie. None directly match comic-book armor, but there are similiarities:

* Mark 17 Artillery Level RT Suit (“Heartbreaker”): There have been a number of armors in the comics with enhanced combat capabilities, but the War Machine armor is probably the closest to something with “Artillery” in the name. The “Heavy Duty” armor that debuted this year is sort of the next-generation War Machine, with a rotary cannon, gun turret and force field.

* Mark 33 Enhanced Energy Suit (“Silver Centurion”): The solar-powered Mark VIII, which first appeared in 1985, was silver and crimson and nicknamed the “Silver Centurion.” Despite the identical names, however, the movie and comics versions don’t look much alike.

* Mark 38 Heavy Lifting Suit (“Igor”): This big, ugly suit – used in the movie to hold up a collapsing crane – resembles the “Hulkbuster” armor that first appeared in 1994 to battle the Hulk. (A Mark II Hulkbuster appeared in 2007.) Stark has also created specialty armor powered by Asgardian crystals to beat another powerful teammate should the need arise (“Thorbuster”).

* Mark 39 Sub Orbital Suit (“Gemini”): Stark has created a number of suits that are space-ready, most of which allow Stark to remain in vacuum for long periods of time without need for oxygen or recharge. They include  the “Space Armor Mark I” (1981), “Space Armor Mark II” (1992), “Outer Atmospheric Armor” (2000, with a solar sail!), “Ablative Armor” (2003, highly resistant to impact), “High Gravity Armor” (2004, can withstand 5 Gs), “Space Armor Add-on” (2008, with its own booster rockets for launch) and “Phoenix-Buster” (2012, designed to defeat the cosmic entity Phoenix). Finally, there’s the “Godkiller Armor” that Stark used to go into space this year, where he has hooked up with the Guardians of the Galaxy for their new title.

* Mark 40 Hyper Velocity Suit (“Shotgun”):  The “Hypervelocity” armor had a super-capacitor ring spinning on its back that allowed Stark to move and think faster than normal. It doesn’t resemble “Shotgun,” but both appear built for speed.

And speaking of Guardians of the Galaxy:

A: Cross your fingers. Downey’s contractual obligations to Marvel Films have been completed, so he can walk without another contract. In his many interviews, such as his recent Daily Show appearance, Downey indicates he’s negotiating in good faith. But no one, possibly even Downey, knows for sure how this will play out.

But you can rest assured that Iron Man will continue, regardless of the actor in the suit. The Armored Avenger is guest-starring with the Guardians of the Galaxy comic book (as noted above), and may have a role in the GotG film scheduled for 2014. And Iron Man will definitely be in Avengers 2 as well, set for 2015. 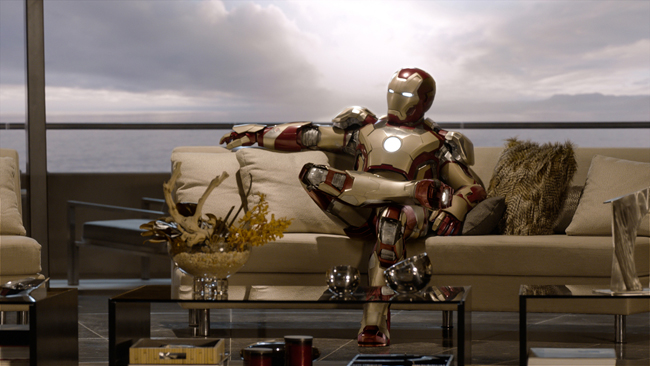 No one's in this Mark 42 armor in Iron Man 3, but thought-controlled armor has been a staple in the comics for years. Copyright Marvel Films. 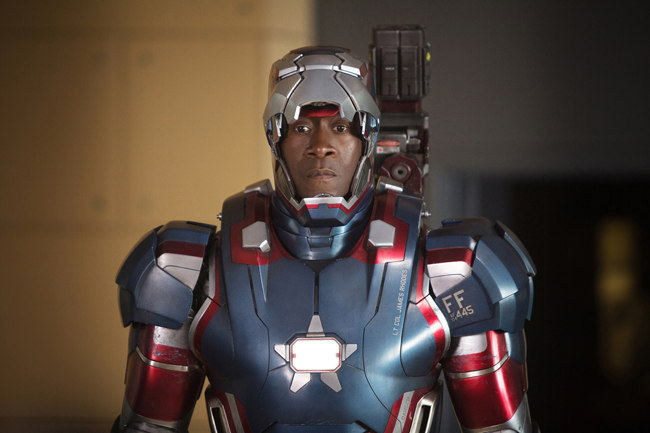 The Iron Patriot armor is worn by Jim Rhodes (Don Cheadle) in Iron Man 3, but by the Green Goblin in comics. Copyright Marvel Films.

Pym may be busy in Ant-Man the movie!

I actually don't know. But why would they avoid Hank Pym, a founding Avenger, when the Avengers are so hot right now? Especially since they could get The Wasp as a bonus if they use Pym.

I suspect I'd get a sting.