Thor, which arrives in theaters May 6, has been running in Marvel Comics since 1962. But the story has been around a lot longer than that. 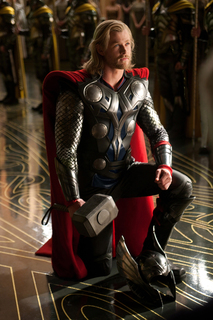 Thor is part of the Norse pantheon of gods, whose origins go back through the mists of time to the Indo-Europeans who are believed to be the root stock of European genealogy and languages. “Donar” – one of the many linguistic derivations of Thor’s name – first popped up in print around the first century AD, courtesy of the Romans. He got very popular in Scandinavia during the Viking era, roughly 700-1000 AD, until Christianity stamped out polytheism in Northern Europe.  Most of what we know of him comes from the “Elder Eddas” – the 13th century compilation called the “Prose Edda,” plus the “Poetic Edda,” which turned up later.

Thor (from whom we get Thursday) was the god of thunder, among other things, and the son of the sky king Odin (or Woden, from whom we get Wednesday). He was the most powerful warrior of the Norse gods, wielding his war-hammer Mjöllnir against frost giants, Jörmungandr the World Serpent, Surtr the fire giant and other threats to the home of the gods, Asgard. He was also erratic, impulsive and none too bright, a red-haired and flame-bearded berserker whose temper caused no end of problems for his pop – and anyone foolish enough to get in his way.

Needless to say, those latter qualities were dropped when Stan Lee launched his version of Thor in 1962. Thor had appeared in various comics before – he’s in the public domain – but Lee and co-creator/artist Jack Kirby came up with a distinctive new and completely heroic version at the ground floor of the newly named Marvel Comics. Thor was only the fourth superhero concept in the “Marvel Universe” (after Fantastic Four, Hulk and Spider-Man), and a founding member of the Avengers (1963). He was blond, not red-headed, and neither prone to anger nor stupid. And for no other reason than he liked the sound of it, Lee wrote Thor’s dialogue as Biblical/Shakespearean.

Lee lifted most of the other concepts of the Elder Eddas intact, including the nine worlds of Norse mythology (of which Midgard, or Earth, is one), and Ragnarök, the Twilight of the Gods that formed the basis for Wagner’s famous opera Das Ring Die Nibelungen (The Ring of the Nibelung).  But Lee added a lot, too, including Thor’s buddies the Warriors Three: comedic, corpulent Volstagg (think “Falstaff”); dashing swordsman Fandral (Errol Flynn); and dour Hogun the Grim (Charles Bronson). And for some reason, he gave Thor’s girlfriend raven tresses, whereas in the myths Sif was emphatically blonde. 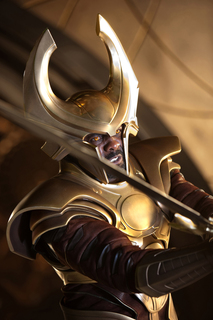 Lee launched Thor in Journey Into Mystery #83, with lame physician Dr. Don Blake discovering a walking stick in a Scandinavian cave that turns into Mjöllnir – and Blake into Thor – when struck against the ground. Eventually the explanation for how this came to be was that Thor had been banished to Earth to learn humility – transformed into the weakest of mortals – to learn humility after his temper started yet another unnecessary war (with the Storm Giants of Jotunheim).

Which is essentially the plot of Thor the movie. Wise, one-eyed Odin will give the Thunderer a comeuppance, thereby teaching him to help the helpless – and to become an Avenger (for the movie in 2012). We’ll also get to see a few other Lee inventions, including Blake’s love interest Nurse Jane Foster (now a doctor in the comics, and an astrophysicist in the movie), the Destroyer (an invincible robot created by Odin as a Ragnarök failsafe) and – yes! – the Warriors Three.

We’ll also see a lot of the grandeur of the old myths, which will explain why they were so popular for so long. Shining Asgard should be impressive, with colorful Bifröst, the Rainbow Bridge, connecting it to Midgard. And we’ll see scheming Loki, the trickster god and Thor’s half-brother, who is the Thunder God’s eternal nemesis in the comics, and in the myths the god who is destined to bring about Ragnarök. In fact, two of Loki’s children, Jörmungandr and Fenrir Wolf, are predicted to kill Thor and Odin, respectively.

Which was unique – only the Norse expected their gods to die. But even that fatalistic philosophy had the seeds of hope, a prediction of rebirth after Ragnarök.

And all it took was the magic of movies – and comic books – to make it happen.

Art above: Chris Hemsworth as Thor and Idris Elba as Heimdall. Both photos by Zade Rosenthal/Marvel Studios 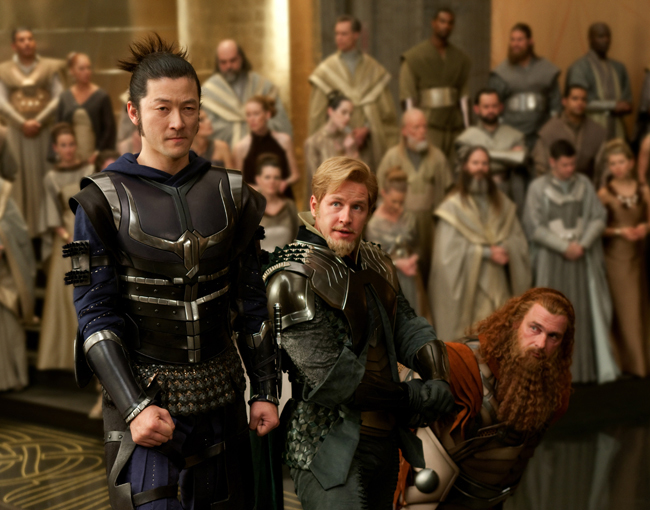 (From left) Tadanobu Asano as Hogun the grim, Joshua Dallas as Fandral the dashing and Ray Stevenson as Volstagg the voluminous. Photo by Zade Rosenthal/Marvel Studios 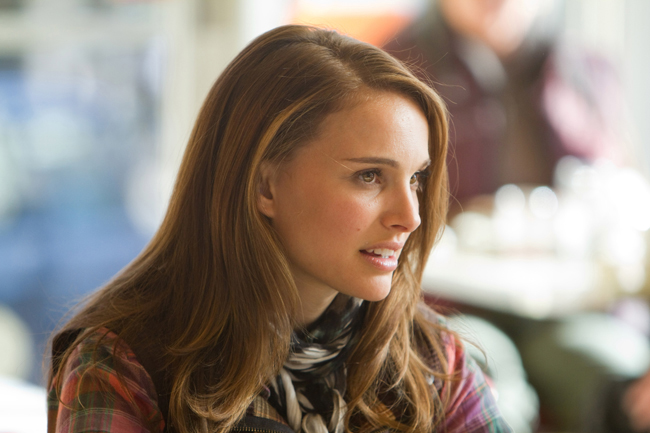 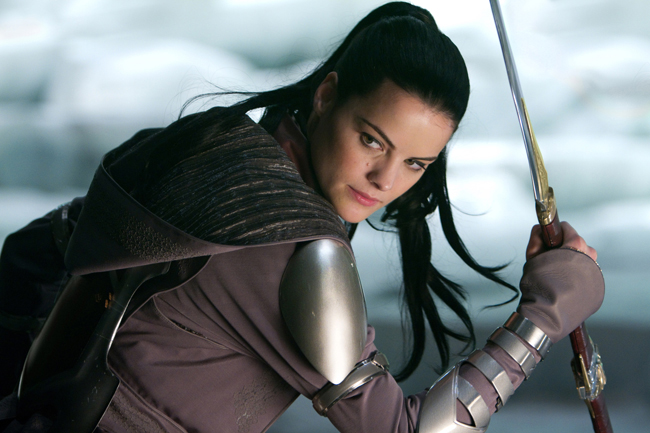 I was impressed with Kat Dennings as Darcy Lewis. She was hilarious and stole every scene she was in.

Is Darcy a character from the comics, or a movie creation? As you can guess, I haven't read Thor in a long time.

Well, Jane IS the most boring "girlfriend" in comics -- especially in the early years, when her sole functions were to faint, be abducted by villains and rescued by Thor in virtually every issue. It gets really repetitious when you read a lot of these stories from '62 to '64 in a row.

I can understand why Lee & Kirby wrote her out of the book (in the Jan. 1967 issue) and replaced her with the much more interesting Sif.

I laughed so much during the movie. Not because it was silly (it wasn't) but because there was so much genuine humor worked in. When I wasn't laughing, I was smiling from the pure joy I felt watching it...and I don't even like Thor very much!

"Wotta woman?" Maybe even a--Wonder Woman? Last I heard, and I could be out of date, the Wonder Woman TV series was canned again. I'd rather see Jaimie Alexander in the role than Adrianne Palicki, anyway.

I don't think anybody in Thor did a bad job. Idris Elba was wasted as Heimdall, though. Elba is an amazing actor but with all the special effect they used on him--especially his voice--it seems like it could've been just about anybody.

You won't read any words from me against Anthony Hopkins as Odin. That being said, I think director Kenneth Branagh would have been terrific if he'd taken the role himself.

Say, why don't we have a thread about this movie? I haven't found one ...

It's number two in the list of discussions on the first page at the moment...

Comment by Captain Comics on May 9, 2011 at 1:01am
Also, I was less impressed with Jane Foster than Sif. Boy howdy! Wotta woman!

My wife and I watched Thor at a midnight show when I got off work Saturday. And of course I enjoyed it -- but so did my wife, who was stunned to see Rene Russo (a favorite of hers) as Frigga. We laughed at the right places, oohed and ahhed at the right places, and felt good most of the way through -- what's not to like? (Well, the fight scenes, which were too loud and too hard to follow.) But, yeah, not Iron Man, but close enough.

Say, why don't we have a thread about this movie? I haven't found one ...

Comment by Ana Canino-Fluit (Anacoqui- mod) on May 8, 2011 at 7:43pm
We watched it last night, and I really enjoyed it. Like Iron Man , I only had minimal knowledge of the character, from guest starring appearances in book I read. I liked what I saw, the city and look felt Kirbyish and the plot was good. I particularly enjoyed Jane, Darcy and Eric (the human trio who are researching the strange storms and befriend Thor. I also loved seeing Rene Russo is something again! Looking forward to Avengers.

Comment by Captain Comics on May 8, 2011 at 6:18pm
Anyhow , CC , I thought from the heading that you might as well be list and describing , even if not reviewing , all the Thor stuff that has been published by Marvel in anticipation of the movie .

Publish a listing , anyway , of:

Your wish is my command, Emerkeith. Go to this thread for more Thor than you can shake a hammer at!

The Baron replied to The Baron's discussion How Old Would Comics Characters Be If They Aged Normally? (And What Would They Be Doing Now?)
"So Walt Wallet is 122, and Skeezix is 101.   Would it cause that big of a stir if they…"
14 minutes ago

Jeff of Earth-J replied to Jeff of Earth-J's discussion DC's 1st Issue Specials
""Their powers were mostly super-strength and durability." I attribute that to Simon…"
56 minutes ago

The Baron replied to The Baron's discussion List of Super-Speedsters
"Added Blitzen of the New Reichsmen."
2 hours ago

Lee Houston, Junior replied to Steve W's discussion A Cover a Day
"Almost didn't make it today but here we are, courtesy of the Grand Comics Database."
9 hours ago

The Baron replied to The Baron's discussion List of Super-Speedsters
"Added Whiz Kid, Zig-Zag and Monenta,"
9 hours ago

The Baron replied to The Baron's discussion List of Super-Speedsters
"Will add Yo-Yo Will add Kid Comet Maybe I'm splitting hairs , but with Blaze allen, I feel as…"
10 hours ago

Richard Willis replied to Captain Comics's discussion Comics Guide: Nov. 28-Dec. 4, 2022
"Even though there is a fair amount of content, my scrolling reminds me that this is a "fifth…"
11 hours ago

The Baron replied to The Baron's discussion List of Super-Speedsters
"I'll add 'em both."
11 hours ago