July 26, 2011 -- With the arrival of the Captain America movie, Titan has released two excellent books shining a light on the character’s creators. For those just coming in, Cap was created in 1941 by Joe Simon and Jack Kirby, in a story lifted almost intact for the movie. While Kirby died in 1994, his partner is still very much with us at age 97, as demonstrated by his new autobiography, Joe Simon: My Life in Comics ($24.95).

Given that comic books more or less came into being in the 1930s, Simon’s Life in Comics is also the story of the industry. He was present for most of the major events in the history of comic books, and was the cause of a few of them. For example, Simon was the first editor at Marvel Comics (called Timely in the 1940s), where he hired a teenager named Stan Lee. Simon worked with nearly every major creator through the 1960s, co-created entire genres (including “kid gang” comics and romance books) and worked for publishers as small as Crestwood and as huge as the company we know today as DC Comics. “Simon and Kirby” was such a recognizable franchise that the duo received royalties (which was unheard of in the 1940s), were the first to have their names on the covers of comic books as a sales tool and today have an entire archives series devoted to their works.

And as much insight as Simon’s book gives us to comics personalities like Bob Kane (creator of Batman), Jerry Siegel and Joe Shuster (creators of Superman) and Will Eisner (creator of The Spirit), he also managed to be around for a lot of non-comics twentieth century history. Which is how he managed to run into comedian Sid Caesar, actor Cesar Romero, boxer Jack Dempsey, writer Damon Runyon and other luminaries.

One can easily glean from the book how Simon managed to be so popular. His easy, affectless prose reveals an affable, flexible, generous and optimistic personality. Add to that Simon’s obvious creativity, and he was no doubt a lot of fun to be around. Since most of us will never have the fortune to meet him, this book is the next best thing.

The next best thing after the autobiography are the comics Simon created, and Titan has collected one of the oddest and funniest titles he and Kirby ever did. 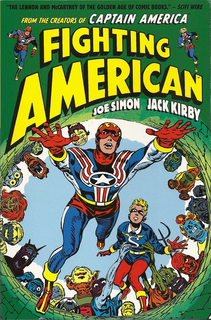 Simon and Kirby left Captain America Comics with issue #10 in 1942, after an acrimonious dispute with publisher Martin Goodman. So when they heard Goodman was going to revive the Living Legend in 1953 (Cap had been canceled in 1950), it rubbed salt into a still-open wound. But the proactive Simon, always looking to turn a negative into a positive, had a brainstorm. He quotes himself as saying to Kirby, “You know, there’s no reason we can’t do our own character again. They can’t corner the market on patriotism, after all. Why don’t we show them how it’s done?”

Thus was born Fighting American at tiny Prize Comics, another star-spangled hero in the tradition of Simon and Kirby’s own Captain America … sort of. Naturally, the powerful pencils for which Kirby was known were present, and as bombastic as they ever were on Captain America. But something was different this time: a sense of humor. Fighting American was so over the top in Red-baiting, Commie-bashing, flag-waving hoo-ha that it was practically a parody of itself (and of Captain America).

“Sure, the book was full of Commies and offbeat villains,” Simon says in the foreword to Titan’s new Fighting American collection ($19.95). “But it also poked fun at the whole superhero thing.” The ever-earnest and jingoistic Fighting American (and his sidekick Speedboy) battled characters like Poison Ivan and Hotsky-Trotski with the same campy seriousness Adam West would affect in the Batman TV show more than a decade later.

The Fighting American trade paperback collects every story in the series, which ran only seven issues (with a two-issue reboot), but was still around longer than the Captain America revival, which died in 1954. (Cap wouldn’t become the popular fixture he is today until his second revival in 1964.) And even 60 years later, the humor and inventiveness shine through every page of Fighting American.

Both books offer welcome insights into both Simon and Kirby. Creating Captain America alone would be enough for most, but for this pair it was just a beginning.

Comment by George on August 5, 2011 at 7:03pm
Anything in the book about Simon's first lawsuit against Marvel (in the mid-1960s)? I've read that Kirby testified on Marvel's behalf and against his former partner in that case.

"At that time [1964] copyright registration lasted for 28 years, with the possibility of a 28-year renewal. I submitted the appropriate paperwork, but didn't include Jack Kirby because he was working for Marvel at the time, on projects that included Captain America. I thought it would constitute a conflict of interest. ...

"All of Kirby's work in the '60s was for Marvel, and he was always terrified that he would stop getting assignments. It was a big deal for  him. He had to bring the money home for Roz, put food on the table for the kids. I suppose it was his upbringing -- his parents were very poor. My parents were poor, too, but I guess we put up more of a front. And I didn't have as much pressure ecause I as doing all sorts of other work.

"Marvel also told Jack that I was trying to cut him out, and he became upset. They promised to pay him the same amount they would pay me in a settlement. So he signed all of these affidavits stating that we were working in-house when we created Captain America."

Comment by George on August 11, 2011 at 11:17pm
At about the same time, Carl Burgos filed a lawsuit against Marvel over ownership of the original Human Torch. Roy Thomas suspects Martin Goodman told Stan to revive the Golden Age Torch in FF Annual No. 4 (1966) to protect Marvel's copyright.

Wouldn't be surprised. I don't judge people by what I read about them, but I will say that I have never, ever read anything positive about Martin Goodman. That does sort of color my opinion.

I'm also struck by this: Kirby essentially pulled the rug out from his former, long-time partner Joe Simon in the 1964 lawsuit, and also cut his own throat, out of panic and selfishness. And yet, if you read the above, Simon is generally gentle and forgiving. Simon doesn't dwell on the 1964 lawsuit, or any other wrongs done to him, in an autobiography where he has outlived all the other players and has every opportunity to settle old scores and have the last word. And yet, he doesn't.

What I got from the book, that Joe Simon is genuinely one of the most forgiving and positive people I've ever read about. He almost never says anything negative about a lifetime in a low-brow, cut-throat business.

So when he DOES say something negative, I pay attention!

I learned about the Burgos lawsuit in an issue of Alter Ego, which featured an interview with Burgos' daughter. She said her father always disliked Stan Lee and never got along with him. That may be why Burgos' return to Marvel in 1964 was so brief. (He drew one Human Torch story and three Giant-Man stories.)

Burgos apparently never got over what happened in 1945, when he returned from WWII to find the younger and less experienced Stan Lee as his boss.

My favorite Joe Simon story: He let his neighbors think he was a bookie, to explain his odd hours and the fact that he worked at home. In the '50s, that was more respectable than admitting to being a comic book artist.

As another artist said of those days: "If you admitted you drew comic books, people would back away from you, as if you'd said you were a Communist or a child molester." So much for the good old days!

"Kirby essentially pulled the rug out from his former, long-time partner Joe Simon in the 1964 lawsuit, and also cut his own throat, out of panic and selfishness."

There was a time when Simon and Kirby (and their families) were very close. After the war, they lived across the street from each other. They were living the suburban dream. It's sad to read about their falling out.