July 12, 2011 -- In the early part of the twentieth century, the United States had the world’s most amazing and unique comic strips, a legacy of innovation and irresistible storytelling almost forgotten today. Which is just one of the reasons I’m grateful for The Comics: The Complete Collection (Abrams ComicArt, $40), by Brian Walker. 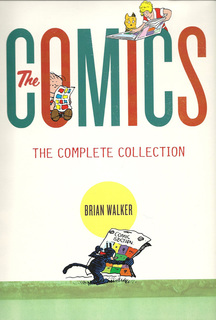 Walker, who previously released this book in two volumes, is a comic-strip expert who has worked in every aspect of the field. He is part of a team producing new strips (“Beetle Bailey,” “Hi & Lois”), has taught cartoon history at the School of Visual Arts, was director at the Museum of Cartoon Art, served as editor of Collector’s Showcase and has written both books and magazine articles on the subject.

Walker is such a scholar that, if there’s a flaw in the book, it is his relentless amassing of minutiae. Walker is so thorough, so methodical and so academic that this can be a formidable and forbidding tome to the newcomer.

But for those of with a love of the medium it’s virtually indispensible. In the first few chapters alone Walker demolished a host of myths about R.F. Outcault’s “The Yellow Kid” that I had taken as gospel for decades. From there Walker’s work is one discovery after another. Like which strips were owned by the syndicate and which by the artists (which often forced major artists elsewhere, like Roy Crane leaving “Captain Easy” to start “Buz Sawyer”). Like how the phrase “hot dog” got popularized (Tad Dorgan’s “Inside Sports”), or what katzenjammer means (German for “cats howling,” and a popular ‘20s euphemism for a hangover) and why a “Rube Goldberg device” is still a catchphrase.

Walker also brings an artist’s eye to how many amazing, uniquely American early strips got started and what effect they had, like the surreal “Krazy Kat” (George Herriman), the intricate “Little Nemo in Slumberland” (Winsor McCay) and the art Deco “Bringing up Father” (George McManus). He continues with the rise of strips through their heyday, and later fall, examining not only the strips themselves and giants like Milton Caniff (“Terry and the Pirates”), Al Capp (“Li’l Abner’) and Walt Kelly (“Pogo”), but the now-declining business of comic strips and even the marketing (think “Buster Brown shoes” plus radio, television and movie spinoffs).

Naturally, there are hundreds, if not thousands of actual comic strips included. Combine that with interviews and biographies of major American cartoonists, and Comics: The Complete Collection lives up to its name. This book is so comprehensive and full of valuable information that superlatives simply fail me. 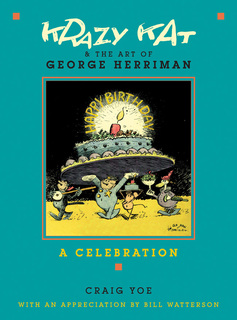 Most people are familiar with the strip’s basics, but almost nobody knows what it means. Ignatz Mouse hates the androgynous Krazy Kat, whom he routinely bops in the head with a brick, which the smitten feline interprets as a valentine, but Offissa Pupp regards as criminal behavior (especially since he is enamored of the cat) and routinely jails the surly mouse. All this occurs in a vaguely Southwestern U.S. landscape that morphs and/or moves from panel to panel.

Celebration collects rare essays by names big and small who interpret this strange triangle in a myriad of ways. Some note that Herriman was “Negro” on his birth certificate, but “Caucasian” on his death certificate, which is fascinating all on its own – but was racial uncertainty or insecurity a factor in “Krazy Kat”? And if so, for God’s sake, someone explain how!

Alas, Celebration does not end the mystery of “Krazy Kat,” but simply informs it. And, you know, that’s exactly how it should be.

If all this comics history arouses a taste for some seminal comic strips, look no further than Fantagraphics’ “Captain Easy” collections. This series (it’s up to volume two, $39 each) collects Roy Crane’s Sunday pages about the good-natured “soldier of fortune,” which were prequels to the dailies Crane was producing at the same time, which paired an older Easy with the strip’s original star, Wash Tubbs.

Collected in oversize hardbacks that present the pages at their original size, these beautiful books restore one of the original adventure heroes of the strips – the affable (albeit two-fisted) mercenary who was much more interested in excitement than money or women, which is what he was supposedly after. Easy moved through a more innocent – and largely unexplored – world, and there’s no better word for this adventure strip than “charming.”

Regarding Victorian Comics; it's actually about early British comics, rather than comic strips. The items I remember it covering are Alley Sloper and Comic Cuts. As I recall, the examples from the former in the collection aren't really comics as we understand them, but the pages from the latter are.

Gilbert Seldes raved about "Krazy Kat" in his 1924 book, "The Seven Lively Arts" -- the first time a "serious intellectual" had paid attention to the "vulgar" comic strip.

The Yoe book corroborates your anecdote, George -- except that it was a bit more cynical. Yoe* says the New York elite would compliment Hearst on running something that was capital-A art and so obviously uncommercial, and he liked that reputation, so he gave Herriman a lifetime contract. A. Lifetime. Contract.

According to Yoe*, many newspapers ran "Krazy Kat" in Arts or Books sections or somewhere, not in the comics section.

(I may be confusing the Yoe book with The Comics, and I'm at work and can't look it up. But it was one of them.)

I read somewhere that Herriman was a Creole who passed himself off as Greek.

"Krazy Kat" was a bit too surrealistic for the masses. I've read that the only reason it survived as long as it did was because William Randolph Hearst was a fan, and refused to kill it as long as Herriman was alive.

I have Yoe's book "Dick Briefer's Frankenstein," and really loved it. The biographical info was interesting, but the fact that Briefer kept using the monster through so many different incarnations (horror, action, comedy) was fascinating. Makes me want to see a lot more examples.

Walker's book sounds really good too. I have been enjoying a lot of comic strip reprint books and history books lately. I hope I find "The Comics" on sale some day!

The Comics: I have the two individual volumes. Everything you say about it is true.

Krazy Kat: Oddly, I never really got into Krazy Kat. OTOH, I never read a Craig Yoe book I didn't like.

Captain Easy: I've got both volumes, but (along with Buck Rogers Sundays) I haven't yet made time to read.

Comment by Captain Comics on July 15, 2011 at 2:49pm
I confess I know very little about British comic strips, so I'd like to learn a little. If that book ever comes back in print I'll snatch up a copy.

Speaking of very early comics, Denis Gifford did a collection of early British comics called Victorian Comics. It's an old book now, but worth a look for its historical interest. I don't know if it made it to the US.

Jeff of Earth-J replied to Jeff of Earth-J's discussion Swamp Thing
"ISSUE #70: Although Constantine now has his own solo series, his presence is still very much felt…"
20 minutes ago

Peter Wrexham replied to Steve W's discussion A Cover a Day
"I posted a Star Trek cover by George Perez a few days ago.  Here's his version of…"
35 minutes ago

Jeff of Earth-J replied to Randy Jackson's discussion Ketchup/Catsup - Refrigerated or not
"If I use a tomato-based condiment at all, I use steak sauce. It tastes better on hamburgers, on…"
49 minutes ago