With the Season Three finale that aired March 31, the Walking Dead TV show has now veered so far away from the Walking Dead comic book that they are the same story only in extremely general outlines. With the understanding that there is a HUGE Spoiler Alert in place, let’s take a look at some of the differences. 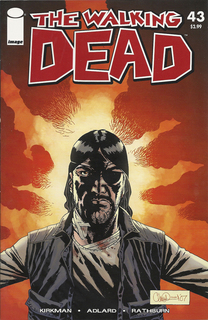 For example, in the comics Rick’s little gang was driven from the prison by The Governor and his Woodbury army. But The Governor died in that battle, killed by his own people when they realized he was leading them against women, babies and crippled old men. (That’s an aspect of the comics I’m sorry didn’t transfer to the show, because it was nice to see some people rediscover their humanity.) We don’t know what happened to the post-Governor Woodbury in the comics – at least not so far – and as they fled the prison Rick’s group was joined by a tough, ex-military guy named Abraham, his girl friend Rosalita and a geek named Eugene who claimed to know what caused the zombie apocalypse, and how to stop it, if they could just reach Washington D.C. So our merry band returned to the road, by horse and truck, on an odyssey to the nation’s capital.

Contrast that with the TV show, where The Governor’s attack fails to dislodge Rick’s group from the prison. And on TV, The Governor is still alive and on the loose (along with Martinez and “The Bowman”), having turned on his own army and killed them all. Woodbury is empty, with the remaining residents – mostly children and senior citizens – taking shelter at the prison.

So it’s safe to say the two stories have irrevocably diverged. But what really seals the deal is what is meant by “Rick’s group” in the two media.

In the comics, The Governor’s assault on the prison was a shocking bloodbath. Dying in the attack were Axel, Lori, her baby Judith, Hershel Greene, Hershel’s son Billy, Tyreese, Patricia and a nurse named Alice, with Carol having committed suicide-by-walker a few weeks before. Escaping were Rick, Carl, Michonne, Glenn, Maggie … and Dale, Andrea, Sophia and a pair of Carl-age twins.

What th-? Yes, as you can see, the TV show’s cast was already at variance from the comics by the end of Season Three. On TV, Dale, Patricia, Sophia and Lori are already dead when The Governor attacks, Carol is still alive, and the cast includes Darryl Dixon, Hershel’s daughter Beth, Karen (from Woodbury) and Tyreese’s sister Sasha, who don’t exist in the comics.

And the kicker is Andrea. In the comics, she remains one of the top three characters, Rick’s sniper, sharpshooter and lover.  On TV … well, the less said about that the better.

Of course, some of the terrible events in the comics are still possible, since Rick’s group remains in the prison and The Governor remains at large. But without his army – and the tank he had in the comics – whatever threat The Gov presents is considerably lessened.

So the next time your know-it-all friend claims to know what’s going to happen, all you have to do is say: “Andrea.” Better yet, you could read the comics – and be a Walking Dead expert yourself!

Meanwhile, TV has taken some liberties with another comic-book property. The CW’s Arrow bears only a superficial similarity to its comic-book inspiration, Green Arrow – and I have to say I approve of nearly every alteration.

Both lead characters, in comics and on TV, are named Oliver Queen. Both were born wealthy. Both learned archery skills when shipwrecked on an island. Both have dated a girl named Dinah Lance. Both fight crime in green outfits.

After that, though, the characters diverge sharply. For example, the Dinah Lance on TV is a pro bono lawyer of some kind, but the one in the comics is the superhero Black Canary. On TV, Oliver’s little sister is nicknamed Speedy, while in the comics that was the name of Green Arrow’s sidekick from the 1940s to the 1970s. And the Speedy in the comics was named Roy Harper, which happens to be the name of Oliver’s sister’s new boyfriend on TV.

In other words, Arrow is kinda-sorta the comic-book version in a blender, with all sorts of Easter eggs dropped into each script for the sharp-eared comics fan. When a character says she’ll be in Central City “in a flash,” that’s a shout-out to DC’s super-speedster The Flash, who lives in Central City. An intersection named Adams and Locksley is a reference to former GA artist Neal Adams, and Robin Hood, whose given name was Sir Robin of Locksley. In the comics, Bludhaven is a suburb of Batman’s Gotham City and Iron Heights is a prison in Central City, but they both appear in Arrow’s Starling City – which, in the comics, is just Star City.

And so forth.  But the thing is, I enjoy Arrow a lot more than DC’s Green Arrow. The current version of the character in the comics doesn’t do much for me, and apparently I’m not alone, because the book has just gone through a major shake-up, where Oliver loses his fortune and is on the run for a murder he didn’t commit.

Already that makes Green Arrow a more interesting book, and I hope it continues to improve. Meanwhile, I have the always enjoyable Arrow on the tube, so I can afford to wait!

Thanks for the recap, Cap! I was starting to get foggy on the details. I checked my collection, and I stopped buying the trades with Vol. 7, which stops at issue 42 (just before the attack on the prison). So it has been a long time.