Geary is the writer/artist who has been crafting those charming graphic novellas about historical mayhem. He did nine books in his “Treasury of Victorian Murder” series of 19th century crimes. Some murders were famous, and some were not. Some were solved, and some were not. In some of them, we saw some really creepy people who were among the first known serial killers. In others, it was left to our imaginations. 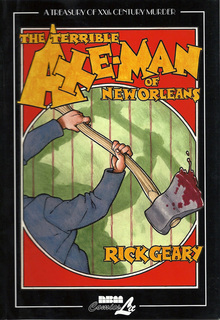 Or, rather, to what historical record Geary could find. He’s very good at digging up information, and like a good journalist, presenting it to us without commentary, so we can make our own lurid guesses. His stories are illustrated in his attractive faux-woodcut style, which suggests a bygone time, with stiff people wearing rictus grins standing with perfect posture in impeccable Victorian clothing, covered in blood.

But lately Geary has embarked on “A Treasury of 20th Century Murder,” maybe having run out of cool 19th century ones. The first two were about the Lindbergh baby and a murdered silent-film director. They were terrific, as all Geary’s stuff is, and I read them voraciously and speculated on whodunit and ogled all the weird, spooky, old stuff.

As I said, great fun.

Geary’s latest edition is The Axe-Man of New Orleans ($15.99, NBM) about a serial killer or killers who terrorized the Big Easy between the world wars. And they never caught him or them, or figured out why the murders occurred, or anything. The police had no clue, which is pretty unsettling.

But you know what’s worse? That I never heard about it. Twelve middle-class people, people just like me and my wife, attacked in their beds in the middle of the night, with nothing stolen, by a guy who was trying to brain them in the head WITH AN AXE.

This is pretty spectacular stuff. Six people were killed, and six were “badly injured” – because they were hit in the head with, you know, AN AXE – and nobody knows who or why or anything. And apparently this is so unremarkable that I know nothing about it. No newspaper story has ever alluded to it, no history teacher has ever mentioned it, all those New Orleans stories during Katrina and now the BP spill … and this has gone wholly unreported. What’s up with that, Anderson Cooper?

Is it because axe-wielding serial killers happen so often it’s not worth mention? Is it because it’s the Mafia and nobody will break “omerta”? Is it because there’s an association of axe murderers who control the media and the government and Glenn Beck and they’re coming to get us all and OMIGOD!

So go read The Axe-Man of New Orleans. See if you aren’t as creeped out as I am. Then tweet me at CaptainComics. Because I do a lot of work late at night, and I keep hearing these sounds outside, and … wait. WHO DAT?

I’ve bragged on DC’s epic “Blackest Night” saga before, which was a terrific horror movie of a superhero story that ran last summer. “Blackest Night” was just a blast, a sort of “Night of the Living Dead Justice League” mash-up. But not only was it terrifying, it was also a great story, plus it advanced the Green Lantern mythology far beyond the point most people thought possible or prudent.

But if you missed it, it’s not too late to get in on the fun. Because DC has just released six – six! – hardbacks collecting the whole freaking thing! And they’re gorgeous, plus they have behind-the-scenes goodies like scripts and sketches and whatnot.

Blackest Night ($29.99; all the rest are $24.99) collects the core miniseries, so you have to get that one. BN: Green Lantern and BN: Green Lantern Corps collect the pertinent issues from the two GL series, and they are as important as they are cool. BN: Black Lantern Corps Vols. 1-2 collect the six peripheral miniseries (Batman, Flash, Justice Society, Superman, Titans, Wonder Woman) which are more cool than important. And BN: Rise of the Black Lanterns collects the various one-shots of canceled titles (Get it? They’re not really dead!) which are just for fun.

For those who’ve already read “Blackest Night,” get the books because they’re pretty. For the rest of you … what are you waiting for?

Comment by Rob Staeger (Grodd Mod) on July 23, 2010 at 1:40pm
Being the NOLA-phile that I am, I need that Geary book! Especially since I'd never heard of the axe-man, either!

(Actually, it's possible that I had. One year I went on a "haunted tour" of the French Quarter, and we heard about so many murders that night that it's tough to keep track of them all. But either way, it's Geary, it's New Orleans, and it's bloody murder, so I'm in!)

Comment by The Baron on July 23, 2010 at 7:21pm
I've heard the Axe-Man story, somewhere. I wonder where my copy of The Big Book of Serial Killers is?

Comment by George on July 23, 2010 at 7:26pm
Geary's book about the "murdered silent film director" (William Desmond Taylor) is a great read.

You can read more about the Axe-Man here. I learned about him several years ago, in some true-crime anthology. He even inspired a song ("The Mysterious Axe-Man's Jazz").