I got part of what I was looking for.  Bruce Campbell was a lot of fun in the role of Sam Axe.  But then again, Bruce Campbell is a lot of fun in any role he plays, whether it’s a star turn in Evil Dead or a bit part in Congo (my biggest complaint about that movie: Bruce’s character died before the opening credits and the movie went down hill from there).  In the episode I watched, Bruce’s Sam Axe prepared to ply his charm on an IRS agent only to discover to his chagrin that the agent was a guy with an androgynous name. 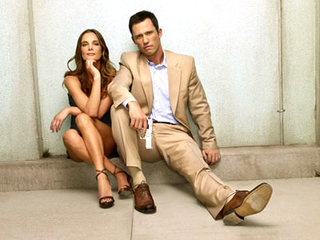 I also enjoyed Gabrielle Anwar’s character, Fiona.  But then again, I have a fondness for Gabrielle that dates back to her days as a silver screen love interest in movies like Scent of a Woman, For Love or Money and Things to Do in Denver When You’re Dead.  In this episode, she tried (and failed) to intimidate a drug kingpin.  I liked that her character had more gumption than sense.  She was a tough girl in a supermodel body, kind of like Uma Thurman.

This problem isn’t unique to Burn Notice.  Actually, it’s quite common.  It was one of my bigger complaints about the new Hawaii Five-O (bad writing being the other).  All of the supporting characters were more interesting than the lead.  I was much more invested in Scott Caan’s devotion to his daughter (as well as entertained by his smart mouth), Daniel Dae Kim’s search for redemption or Grace Park’s attempts to prove herself as the rookie cop than I was in the lead character’s stoic grief for his father. 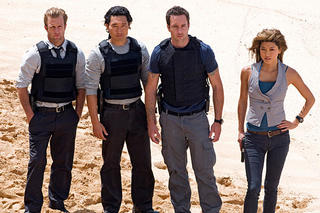 This problem also isn’t unique to television.  The first time I remember remarking on this problem was in R.A. Salvatore’s Demon Wars series of novels.  The lead character was a young boy who became a stereotypical barbarian warrior when he grew up.  I was decidedly more interested in the young girl he rescued.  I though the disgraced and drunken monk would have been another better choice- as he intentionally started barroom brawls in the name of “preparedness training.”  I suspect that Salvatore agreed.  Jill, the young girl, eventually became the lead but I had abandoned the series long before then.

Unfortunately, Salvatore’s early misstep carried over to the CrossGen comic book.  The comic also focused on the barbarian, while the female co-star and the untrustworthy dwarf were both significantly more interesting.

I understand one root of the problem.  There’s always the issue of audience identification.  I don’t mean that all of these leads happen to be white males of a certain age.  That’s a contributing factor.  It is boring when every lead looks roughly the same.  But while that’s an overlapping issue, the problem is a little bit more than that.

There’s the idea that the audience won’t be able to relate to the main character if that character is too strange.  So writers tend to set up situations in which the craziness circles around the main character.  They’re the calm in the midst of the storm and we’re supposed to identify with them that way. 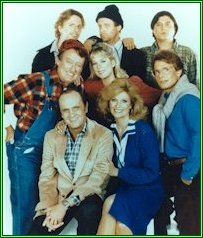 There are some good examples of this, especially in sitcoms.  Bob Newhart was the straight-laced, buttoned-up owner of a small inn in New Hampshire, surrounded by strange people.  Jerry Seinfeld was the relatively normal one in the midst of oddball friends and neighbors.  But Newhart’s put-upon frustration was the humorous heart of his show.  And Seinfeld’s character was also a comedian, whose wisecracks and humorous observations commented on the craziness around him.  Newhart and Seinfeld may not have been as instantly memorable as the brothers Darryl or Kramer but they were at least interesting in their own right.

There are some good examples of this in crime and cop shows as well.  In fact, there are two good examples on television currently.  In Bones, David Boreanaz’s Agent Booth has the fewest quirks of anyone in the cast.  He’s not the one inordinately interested in bugs, suffering from an incurable lack of confidence or dealing with a detached academic eye that makes most social interactions awkward.  Those are the supporting characters or, in the latter case, the co-lead.  Yet, even as the normal guy, David Boreanaz is charming and fun to watch.

The cable-show Leverage is another great example.  The supporting cast is full of fun characters- the wisecracking hacker, the socially awkward cat burglar, the bruiser who hates guns.  Yet the lead character, Timothy Hutton’s Nathan Ford, has the most interesting story.   His grief over his son’s death is more poignant and present than Steve McGarrett’s quiet and often absent grief for his father in Hawaii Five-0.  Ford’s quest for redemption, drinking problem and occasionally off-the-wall ideas make him as intriguing as anyone in the cast.

There are other ways to get around the problem.  You could invert the idea and make the lead character the odd one, as is the case in Columbo, Monk and Castle.   You could forego a traditional lead character and work with an ensemble cast.  But whatever you do, in television shows, novels or comic book series, you want to be sure that your lead character can hold the audience’s attention.

I actually like Michael on Burn Notice. I suppose he doesn't have much personality but I enjoy his character. I like his narrations on the spy trade and he is pretty resourceful. While I like Sam Axe, his prequel movie was not very good, imo.

I'll agree with you about McGarett on Hawaii Five-O.

I have a love/hate with Nate on Leverage. Sometimes I like the character, other times I don't. I love the rest of the cast though.

Comment by Travis Herrick (Modular Mod) on June 17, 2011 at 11:24am
I guess that is what makes horse races as I really like Michael Weston on Burn Notice, but Nate is easily the character I like the least on Leverage.

Yeah, sometimes it works, and sometimes it doesn't. Personally I like Michael Weston (and the cross between practical stoicism and exasperation that Jeffrey Donovan brings to the role). Part of that might be carryover affection for the character -- the show hasn't been at it's peak for a couple of seasons now, though hopefully Michael's new situation will bring some life to it.

One other practical reason why Michael might need to seem blander than the rest of the cast (including him mom, the awesome Sharon Gless) -- he routinely goes undercover with new personas each week. Weston's low-key personality is a neutral baseline from where all these other aliases can spring. (Although generally they're just variations on Tough Guy, Nervous Guy, and Slick Guy.)

Comment by Doc Beechler (mod-MD) on June 17, 2011 at 6:18pm
I love the Weston "When you're a spy..." descriptions.  When Holly and I are doing something that could, if you really squint, be spy like, I always start "When you're a spy...".  We had to get a new key for a hotel room last weekend and when I went down to get it, the front desk person gave me a new one without looking at my ID which disturbed Holly a bit.  I responded that I just smiled and acted non-scary, because when you're a spy...

Comment by Chris Fluit on June 19, 2011 at 5:12pm
This has been fun. Plenty of people disagreeing with me last week (concerning Avengers Initiative) and then again this week. That's cool. A little bit of disagreement is healthy. I'm glad that other people enjoy Burn Notice. Maybe I didn't give it enough of a chance and it would grow on me over time.

Comment by Rob Staeger (Grodd Mod) on June 20, 2011 at 7:46pm
Doc, I love the "when you're a spy" descriptions, too. A while back I was working on a (temporarily abandoned) novel about a con man in the future, and I realized that whenever I was explaining what he was doing or planning, I was lapsing into Weston-speak.