The original Valiant Entertainment exploded on the scene in 1989 and quickly became the third largest comics publisher in America. But the company was sold to Acclaim in 1994, and management indifference and industry changes contributed to Valiant throwing in the towel by 2004. 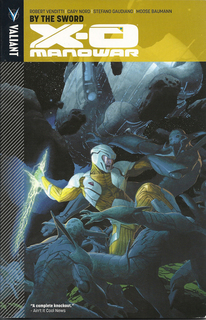 The company has been resurrected by an entirely new team, and launched five new titles in 2012. Those books re-introduced most of the major characters of the old Valiant Universe, minus those whose rights were no longer available. I’ve read trade paperbacks collecting the first four issues of the first three titles, and I have to say I’m impressed.

First out of the gate is X-O Manowar Volume One: By the Sword ($9.99), which tells the story of Aric of Dacia, a 5th century Visigoth captured by aliens. He escapes enslavement by stealing (or being stolen by) the X-O Manowar armor, a mysterious, sentient Iron Man suit that is even more technologically advanced than his captors. Then he returns to Earth to discover, to his shock and dismay, that 16 centuries have passed!  Everything and everyone he knew – including his beloved wife – are long since dust.

The art is by Cary Nord, formerly of Dark Horse’s “Conan” books, and is well-suited to a physical-action series, especially the scenes set in the blood and grime of the 5th century. The writing, by newcomer Robert Venditti, impressed me less – it offered little new that I hadn’t already seen in the 1990s, and the déjà vu was a bit disappointing.

But that’s going to change with this summer’s big X-O storyline, “Planet Death.” Unlike his ‘90s predecessor, according to Valiant Publisher Fred Pierce, this Aric will attack the alien race that stole his life.

“X-O Manowar has always been the character I followed most closely in the early days of Valiant,” Pierce said in an e-mail interview, “and now he's finally going to get the one thing he never could back then – revenge. Robert Venditti and Cary Nord have done a phenomenal job re-defining and launching this series last year.  Now, they're gearing up this series to never-before-seen heights with the ‘Planet Death’ story arc.” 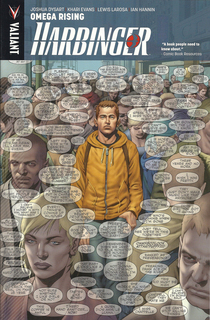 Next up is Harbinger Volume One: Omega Rising ($9.99), which also resurrects a concept from the ‘90s. But this one takes everything up a notch.

Harbingers, in the Valiant Universe, are people born with psychic powers. They’ve only begun appearing since World War II (there’s a hint Hiroshima may be responsible), and one of the first is Toyo Harada, who is exceptionally powerful – one of only two known “omega-level” Harbingers. Harada has used his powers to build the enormously powerful Harbinger corporation, which quietly recruits and trains Harbingers to use their powers constructively. Or so he says.

The other omega Harbinger is Peter Stanchek, a homeless American teenager being crushed by the downsides of his power – he can’t tune out the thoughts surrounding him, he endangers everyone he loves and he doesn’t know if he’s sane or not. But one thing he’s sure of is that he doesn’t trust Harada, and he recruits other Harbingers of similar sentiment to battle this Professor X wannabe. The conflict between Harada’s Harbingers and Stanchek’s Renegades, and the murky moral ground both inhabit, is the core of the series.

And what a series it is! Written by Joshua Dysart (Unknown Soldier) and drawn by Khari Evans (Immortal Iron Fist), it jettisons virtually all superhero tropes except the super-powers for a fast-moving, morally ambiguous, complicated story with high stakes both for the world and for Dysart’s three-dimensional characters.

A world which is expanding this summer with the new Valiant’s first crossover, a miniseries called Harbinger Wars. It ties together both Harbinger proper and Valiant’s third series, Bloodshot. 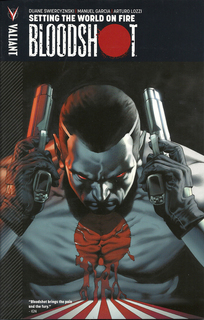 Which brings me to Bloodshot Volume One: Setting the World on Fire ($9.99). This series is also blessed with a terrific creative team, crime writer Duane Swierczynski and artist Manuel Garcia, who build a gritty, nasty little world for the lead character, a government operative with nanites in his blood that can repair virtually any injury but who has no core personality – he is fed different background scenarios to motivate him for each mission. When Bloodshot escapes and discovers the truth, he begins a quest to find out who he was before becoming an unstoppable killer – and if any of that man is left.

Which will somehow lead back to Peter Stanchek in Harbinger Wars, a series Associate Editor Joshua Johns says will “bring the Valiant Universe to its boiling point.”

And I haven’t even gotten to Valiant’s other two titles, Archer & Armstrong and Shadowman. Those have also been resurrected from Valiant’s heyday, and bring with them a couple of other core concepts of the ‘90s Valiant Universe.

And I, for one, can hardly wait.

These sound really intriguing. My pull list is already much too full, but I'll have to consider them in my next trade paperback purchases.