DC’s re-launch of its 52-title superhero line last September made explosive headlines, and now the publisher is upgrading its mature-reader line, Vertigo – albeit on a somewhat smaller scale.

Four new titles launch in March, three ongoing and one miniseries. DC recently published a preview, given away free at comic shops, with seven pages of each new series. That’s not enough to really offer an opinion – but I’m a fanboy, so naturally I will. The title I’m most excited about is Fairest, a companion title to Fables, which has run more than 100 issues (and various miniseries) extrapolating adventures of fairy-tale characters as if they have always existed – immortal (if enough people remember them), enchanted and hiding just outside our perceptions. Remember the Prince Charmings from “Snow White and the Seven Dwarves,” “Cinderella,” and half a dozen other stories? Writer Bill Willingham posits that they’re all the same guy, which means he’s something of a cad (but very charming). Jack Frost, Jack the giant-killer, Jack Sprat – all the Jacks, every one, are all the same guy. Which means he’s not terribly stable, but he does get around. You get the drift. 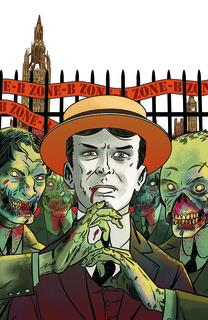 And in Fables, we’ve met some very formidable women: Snow White (wife of the Big Bad Wolf), Cinderella (an ultra-competent espionage agent), Beauty (of “… and the Beast,” mayor of Fabletown), and so forth. We’ve also met some women with problems, like the emotionally damaged Rose Red and the cursed Sleeping Beauty.

The current adventures of these fascinating females have been terrific fun, and now Fairest promises their previous adventures, which should be equally entertaining. Willingham is again the writer, with award-winning “good girl” artist Adam Hughes on covers, and fan-favorite Phil Jimenez (Wonder Woman) on board for the first storyline (starring Briar Rose). 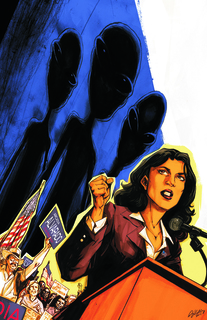 A second title setting my comic-book senses a-tingle is The New Deadwardians, a miniseries set in a world mirroring England’s post-Victorian period, where the lower classes have all become zombies, and the upper classes have become vampires to protect themselves. The middle class is still human, but even so London homicide detective George Suttle usually has very little to do, given that most people are already deceased. That changes in the first issue, where an aristocrat turns up dead – well, deader – and Suttle must investigate the murder, which promises to show how the world got this way. Vertigo has already tested these waters with two “Victorian Undead” series – starring Sherlock Holmes fighting zombies and vampires – and if that’s any indication, Deadwardians ought to be good, wholesome, corpse-ridden fun.

I’m mildly intrigued by Saucer Country, starring the Mexican-American (and female) Gov. Arcadia Alvarado of New Mexico, who is planning to run on the Democratic ticket for president until she appears to be abducted by aliens. I’m not a big UFOlogist (is that a word?), but the part of the premise that intrigues me is the open use of real-world politics. I don’t want all my comics to become political screeds, and most comics publishers avoid politics so as to not alienate any potential reader, so every once in a while I like to see a comics writer try to tackle relevant issues and not just fantasy. 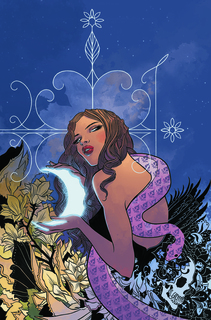 The preview of the fourth title, Dominique Laveau: Voodoo Child, doesn’t do much for me. It appears to be the cliché of a twentysomething discovering that they are “the promised one,” with various hidden factions battling for control over him or her (See: The Matrix). In this case it’s a her, a Tulane grad student, who – at a guess – will discover she is the descendant/reincarnation of Marie Laveau (the historical Voodoo Queen of New Orleans), or the new Voodoo Queen, or something similar. Been there, done that, played the videogame. Nor do I much care for the art, by comics veteran Denys Cowan, which relies heavily on scratchy-scratchy rendering I find unappealing.

These four books join a line that has canceled or ended a few series recently (DMZ, Northlanders, Scalped) but is still running strong on a line of core titles I truly enjoy, including American Vampire (about a new, more dangerous Wild West breed of bloodsucker), the aforementioned Fables, Hellblazer (starring John Constantine of movie fame), iZombie (a black comedy about monsters trying to fit in) and Sweet Tooth (a sweet-natured tale of post-apocalyptic human-animal hybrids).

The four new books fit in well at Vertigo, a line where the only thing the books have in common is a unique vision.

I'm looking forward to all of these, actually -- although, like you, I was the least impressed by what I saw of Dominique Laveau in the preview. But my love of New Orleans is definitely going to have me checking it out, and hoping for the best, nonetheless. And I like Cowan's style, so that's a plus for me.

I might wind up tradewaiting the New Deadwardians, though -- but there's a chance I'll be picking it up in singles just to watch the mystery unfold month by month.

What's the status of Unwritten? It's not mentioned in your post/article.

Unwritten is continuing, but there's only one month left of its double-shipping. These four are just the new Vertigo books... not the only ones.

I wasn't trying to be comprehensive, but since I do read Unwritten, I should have mentioned it!

I'm going to be picking up Fairest naturally, and I have high hopes for it. Every time I think I am undead out something comes along like New Deadwardians comes along that entices me enough to check it out.

I will be picking up the first issue of each of them, but likely tradewaiting either all of them or only the ones that interest me.

Sometimes with Vertigo, I will pick up the first issue and decide it's not for me, and then critical reviews will get me to pick up the first trade. Read as a trade, I love it. "Recent" examples include DMZ and Scalped. After one issue, I thought I would never read another one again. But now I've loved both of them (well, especially Scalped) in trade form. DMZ is one that I really enjoyed for about the first six or seven trades, but the last couple haven't wowed me, so I'm not sure if I will just gather up the rest of the trades or just let it peter out. After all, I have lots of stuff left unread as it is!

I was enjoying DMZ trades for a while, but dropped around the same time you did. Scalped has recently gotten back on my radar, though, and I'm now up-to-date on the trades. Man, what a ride!

I'm not sure why DMZ faded for you guys...but apparently you're not alone. I'm still enjoying it. Matty really got into politics after you left, and there have been lots of complications. The focus of the series definitely shifted. I'm planning to stick around to the end. I'll let you know if Brian Wood sticks the landing!

I never had a lot of interest in DMZ because of the implausibility of the premise. Sure, America could break up along political lines, but the fault line wouldn't be New York City, or anywhere close. There's an interesting, honest story to be told about the politics in flyover country, but we'll never read it.

DMZ mostly faded because of lack of budget, Mark. Sooner or later I'll pick it back up, but when I started dipping into Vertigo trades again, I decided to go with Scalped and Northlanders rather than DMZ. (Another reason for that is that I lent my DMZ trades to a friend of mine, and can't remember which trade to pick up next.)