Not that it’s badly written -- quite the contrary. It’s by Peter Milligan, who’s been working the comics vineyards for years, honing his craft. 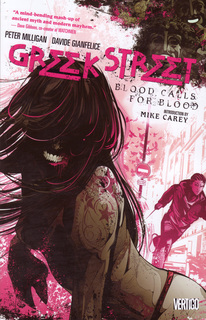 And it is both craft and art; Milligan doesn’t write ordinary comic-book stories. There’s always a twist or an angle to a Milligan story that you don’t often see in any kind of story, much less one found in a medium just now shaking off decades of dust from the kidlit dungeon. From Shade the Changing Man to The Extremist to The Enigma to The Bronx Kill to Human Target, there’s always something pervy in a Milligan story, usually something ultra-violent or, ah, sexually inappropriate. Inter-family murder, incest, disturbing fetishes, identity confusion, same-sex or May-December liaisons – tinkering with taboos is something of a Milligan specialty.

Which makes Greek Street almost inevitable, too. It’s a real street in Soho, London, an area which has long had a bad reputation for red-light shenanigans. So how could Milligan resist writing a series combining Geek Street’s rep and its namesake?

Because that’s what Greek Street is – a blending of ancient tragedies in a modern setting. There’s a gangster family called the Fureys who get some dirt on a decadent aristocrat, Lord Menon (Agamemnon), whose daughter Sandy (Cassandra) hooks up with Eddie (Oedipus), who has already accidentally slept with and killed his mother, Jo (Jocasta), and goes on the run while Mischa (Medea) commits murders for which they are blamed, investigated by Inspector Dedalus, whose son Carus (Icarus) is a friend of Eddie’s, while ex-SAS agent Killes (Achilles) searches for … oh, you get the idea. As one of the strippers at the Olimpya club (Greek chorus) says, “those old stories aren’t through with us.”

Which is why I was distracted the first time I read Greek Street, because I have read most of those “old stories” too, albeit a long time ago. So every time a familiar name was introduced, half of my brain would run off on a tangent trying to remember who or what I knew about the classic version, to compare and contrast with what I was reading.

Which was unnecessary. Milligan is not simply re-telling the old stories; he’s just using them as a starting point.
Oedipus – excuse me, Eddie – is no hero, and once the requisite incest/matricide is achieved, he heads off in an altogether different direction than Oedipus Rex (no eye-gouging, for example). And while Eddie is pursued by the gangster Fureys (which is, in the Greek plays, more Orestes than Oedipus), they are not the classical Furies (or Erinyes), who do exist elsewhere in the book as a trio of odd women who somehow resurrect the dead Russian stripper Mischa. That resurrection, and Mischa’s superhuman murder spree, are the only evidence of the supernatural so far; Milligan has not invoked any Olympian gods, as the ancient Greeks were wont to do. And the ultimate distinction is that Sophocles, Aeschylus, Euripides and the rest didn’t mix their characters and stories – but Milligan is free to do so.

Another difference between Greek Street and the ancient Greek plays is that, duh, it’s a comic book. Which means that a lot rides on the artist.

Fortunately, Greek Street has Davide Gianfelice (Northlanders). His strippers are sexy, his leading men are Euro-pretty, his violence is over the top. Best of all, he can help the reader distinguish visually between characters, and lead them through complicated action – incredibly necessary in a Milligan book, especially one with competing and interweaving narratives.

Which means Greek Street is its own, unique animal. It appeals to the mind with its complicated storylines, classical allusions and questions of fate and hubris. But it also rages, as did its predecessors, with blood and sex and thunder, which makes for a slam-bang comic book as well.

And you don’t need to have read the classics to enjoy it (although I certainly recommend you do, for your own sake). Check out the first trade paperback, Greek Street: Blood Calls for Blood ($9.99) to see for yourself.

After all, you don’t want to anger the Furies!

Having just read his Decimation X-men series (#178-181- House Arrest), I'd beg to differ. To be fair, with his name on it, I was expecting something a cut above the ordinary, but I suppose he has to do the editorially driven bread and butter stuff too...

Granted, most of his stuff pushes the content of mainstream comics though...

As I've spent a few days and nights wandering the streets of Soho, I'll probably have to read this sometime. As a red light area it's but a pale shadow of its 'glory days' by the way. It's been well cleaned up in recent years.