Vertigo's 'The Chill' lives up to its name

DC’s new Vertigo/Crime graphic-novel series is off to a bloody good start, with the third entry – The Chill ($19.99) – living up to the high standards of its predecessors. 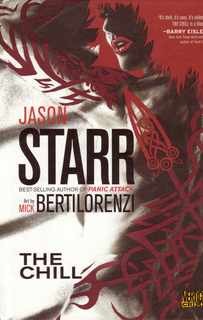 The book earns its title in a variety of ways, including the twisted relationship between two serial killers (father-daughter), the murder method (heat-sucking magic) and the shock ending, which I won’t even hint at here.

The story involves Celtic mythology – which means my red-headed wife loved it immediately – and a sort of living succubus from Ireland who keeps herself and her father eternally young by suckering young men into her bed for the father to kill in an ancient ritualistic fashion. Since every man sees her differently – and what he most desires – this isn’t a difficult party trick for her.

The story involves pursuit of the pair by a detective from the old sod who knows their game but can’t convince New World law enforcement that they exist – and that he isn’t crazy as a banshee. Especially since every witness describes the girl differently.

Written by best-selling author Jason Starr (Panic Attack) and effectively illustrated by Mick Bertilorenzi, The Chill features nudity, cursing, sex and impalings, so it isn’t for the kiddies. But it’s a pretty quick read for a big-boy book; my wife and I both devoured it at sitting.

Like all the Vertigo/Crime books so far, The Chill mixes horror and crime to take advantage of the best facets of both genres. And nobody does that better than Vertigo. 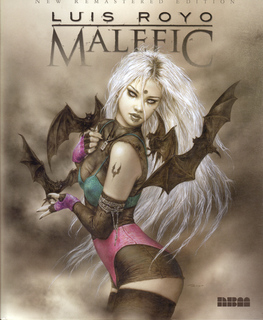 * Fantasy artist Luis Royo’s Malefic collection, previously released in 1996, has been redesigned and re-released (NBM, $32.99). The new version organizes the plates around general themes and is a quality clothbound book instead of an oversized trade paperback.

And it a very beautiful book, both in format and content. Royo is an absolute master of his craft, creating incredibly gorgeous and expressive women (and sometimes men), and switching easily from fantasy to sci-fi to horror.

I do have one caveat: Don’t read the liner notes. A picture is worth a thousand words, as they say, so Royo would do well to let them do the talking. Then we wouldn’t have to read stuff like this next to a picture of a girl with a sword: “Emerging from red/Weapons can be used or caressed. The caress of death itself. The new Venus emerges from the mud while she caresses death.”

Bleah. Buy the book for the gorgeous art. Ignore the words. 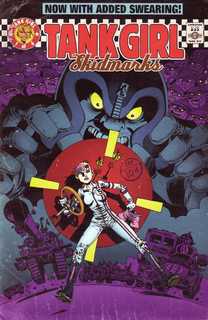 * Tank Girl isn’t for everybody – it’s a cult comic strip suffused with irreverent, drug-addled, promiscuous, punk-influenced, anarchic, post-ironic, British underground humor. As such, it’s the Antichrist of comic strips to half the world’s population.

Fortunately, I fall in the other half, and enjoyed Tank Girl: Skidmarks #1 (of 4, Titan Books, $3.99) for all of the above. Yes, she’s casually murderous, her boyfriend’s a mutant kangaroo and she just says “yes” to drugs. But her heart’s in the right place, as she rides her tank in a cross-continental race in post-apocalyptic Australia to help a friend in a coma.

Not a girl you can bring home to Momma. But one I don’t mind spending time with – as long as I’m safely on this side of the page!

* I wanted to like Grimmer Tales: A Wicked Collection of Happily Never After Stories (Plume Original, $16), but failed.

It’s a collection of cartoons by Erik Bergstrom with unsavory endings to fairy tales. But since most fairy tales were pretty gruesome to begin with, before they were watered down to kid-lit, black-humor endings to the tales of Red Riding Hood or Pinocchio aren’t that far removed from their actual origins. And since the art is derivative of Ralph Steadman, I just didn’t find much here that I haven’t seen before. I don’t mean to be unkind, and I realize I am something of a jaded audience. So if you’ve never imagined what would happen if Rapunzel caught her hair in a garbage disposal or love the cartoon style Steadman created, you might enjoy Grimmer Tales. 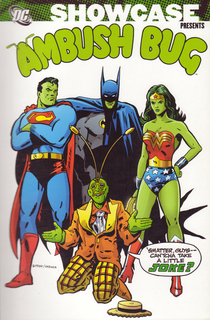 * I also remembered enjoying Ambush Bug back in the day, when he transformed from a lame super-villain into a character who was aware he was in a comic book, and played genre conventions for laughs. But I just re-read all those early tales in Showcase Presents: Ambush Bug, (DC, $16.99) and they didn’t hold up very well. Maybe I’m just too old.

Well, you are kind of up there, Andrew.

Comment by Captain Comics on January 6, 2010 at 5:54pm
Thanks, Baron. I know I can always count on you for some moral support!