Alex Sheikman’s series Robotika is a lot of things, but if pressed I’d call it a fable. A really, really violent fable. 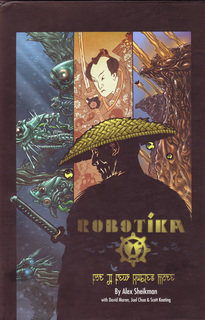 Sheikman, who moved to the U.S. from Russia when he was 12, brings an unusual, untamed sensibility to his work. His artwork combines the lyrical beauty of P. Craig Russell and the jagged chiaroscuro of Jae Lee, but is definitely its own animal and is framed by some daring and gorgeous design.

His story is animated by a bizarre goulash of vibrant pop culture licks. Sheikman plays the Akira Kurosawa card by combining the samurai genre with the Western, but it’s also an imaginative science fiction story set in a dystopic future. Toss in elements of steampunk, pulp fiction and more than a little poetry (one character favors haiku), and something fresh and unclassifiable emerges.

The first miniseries, collected as Robotika (Archaia, $19.95) introduced our leads, the self-styled “three yojimbos”: Niko, the artificial intelligence in search of a soul; Cherokee Geisha, the female samurai with daddy issues; and Yuri Bronski, the gunslinger (whose name is likely a nod to Charles Bronson in Magnificent Seven, which was a remake of Kurosawa’s Seven Samurai).

The second miniseries, Robotika: For a Few Rubles More (Archaia, $19.95) has just been collected, continuing the story of the three yojimbos. Sheikman adds David Moran (scripter) and Joel Chua (colorist), which changes the dynamic considerably, especially Chua’s colors, which occasionally blur and muddy Sheikman’s meticulous linework. But it’s still a Western in samurai drag, now with a bit more of a Sergio Leone feel (given the title), complete with a Good, Bad and Ugly showdown. And it’s still something unique, which leaves even veteran comics readers guessing what comes next.

And why is it a fable? Because it’s three characters in search of happiness, who must persevere in the face of a hostile or uncaring world. From Snow White to Hansel & Gretel, that’s the underlying theme of many fables. This one – with its bloody gunfights and swordfights – just has protagonists a tad more aggressive than most. 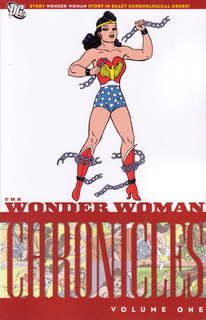 Perhaps influenced by that line of thinking, I’m looking at early Wonder Woman stories in a more charitable light.

I have been as snarky as any in reference to those stories, by psychologist William Marston and stylized magazine illustrator H.G. Peter. Marston’s unusual sexual theories are now well-known, and account for the emphasis on bondage and dominant-submissive scenes that have afforded us snarky types so much fun.

Now DC Comics has embarked on a chronological reprinting of the Amazing Amazon’s stories in full color trade paperbacks, beginning with “Wonder Woman Chronicles” Vol. 1 ($17.99). As I perused that volume, containing Wonder Woman’s first appearance in “All Star Comics” No. 8 (December, 1941) and continuing through “Sensation Comics” No. 9 (September, 1942), I realized that I was underestimating these stories. There’s a reason parents found them harmless and little girls found them wonderful in those long-ago years: Marston brings a feeling of fairy-tale whimsy to stories which are about, after all, a beautiful princess.

Yes, people get tied up a bit too much, but that happens a lot in adventure fiction anyway, and it’s easy to ignore if you’re not focusing on it. These are harmless and charming stories, with a fine role model for young girls in a confident, dynamic princess who attempts reason before force but doesn’t back down. 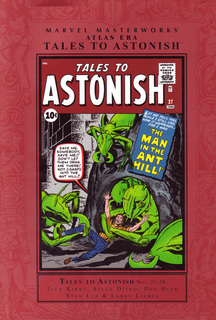 I’m also re-evaluating my opinion of Marvel’s late 1950s suspense books, published when the company was referred to as Atlas. I used to dismissively refer to them as “Big Monster” books, because they often featured giant creatures with ridiculous names defeated by the cleverness of ordinary men who rise to heroism. But as I read the latest reprint, Marvel Masterworks: Atlas Era Tales to Astonish Vol. 3 ($59.99) I realized how professional they really were – and how I’ll miss the genre when the last story is reprinted and there are no more left that I haven’t read.

These stories are by the same folks who in the early 1960s launched the Marvel superheroes to huge success, and by the late ‘50s were already in a groove. Stan Lee, Jack Kirby, Steve Ditko, Don Heck and Dick Ayers do all the heavy lifting, and hints of the greatness to come (Fantastic Four, Amazing Spider-Man, Incredible Hulk) are obvious.

I’ll still call titles like Tales to Astonish Big Monster books, but now it will be with affection.

Has Marvel reprinted Amazing Adult Fantasy (Lee and Ditko's "Twilight Zone"-ish series)? And if not, do you know if there are plans for a reprint?

Comment by Jeff of Earth-J on April 3, 2010 at 12:11pm
Wonder Woman Chronicles: This series isn't as usuful (to me) as the Superman or Batman Chronicles series because Wonder Woman Archives already reprints the stories from Wonder Woman and Sensation Comics in chronological order. When the DC Archives series first started, it may have seemed like a really keen idea to begin Superman Archives with Superman #1-4, but it got the whole series off on the wrong foot by ignoring the early issues of Action Comics (leading to the "separate but equal" Superman in Action Comics Archives series). Batman Archives almost got it right by starting with Detective Comics reprints, but fouled it up by skipping Batman (which led in turn to Dark Knight Archives). Continuity was inportant in the Golden Age, too! [/soapbox]

Tales to Astonish Masterworks: I like going to comic book "shows" (which consist of dealers selling comic books) much more than I do attending comic book "conventions" (which consist of publishers and guest stars and panel discussions). At such shows I would always have some "fall back" issues to buy if i couldn't find anything else. Usually these would consist of "reading copies" of Magnus Robot Fighter, or Doctor Solar, Man of the Atom, of other Gold Key series such as Star Trek or Dark Shadows from the three-for-a-dollor box. Now, thanks to this being the "Golden Age of Reprints", those little joys are becoming fewer and farther between. I used to like to buy '70s reprints of '50s "Big Monster" books if I couldn't find anything else, but now I no longer need to. Be careful what you wish for!

Comment by Captain Comics on April 3, 2010 at 1:12pm
Jeff, our collector sensibilities are often on the same beam, and your Archives thoughts are identical to my own. (And I'll add that it takes a special kind of dumb to name the Archives containing only Detective Comics "Batman," meaning the inevitable Archives containing Batman would have to be called something else. Dumb, dumb, dumb.) But one reason I have high hopes for the Wonder Woman Chronicles is that it might move a little faster than the Wonder Woman Archives. Currently that series is up to volume 6 (or will be soon), which takes us to 1945. I've read all Wonder Woman from 1958 on (thanks to my own collection and the Showcase Presents series), so I'd like to read those intervening 13 years' worth of stories as soon as possible (ain't gettin' any younger!). I'm hoping Wonder Woman Chronology will do that for me, since they seem to come out more regularly than Archives.

Speaking of which -- and related to the "What's Missing from the Golden Age of Reprints" thread -- where are the Golden Age Flash and Green Lantern reprints? The Archives for Jay Garrett and Alan Scott seem to have stalled at volume two, while they never received a Chronology series -- both the Flash and Green Lantern Chronologies began with their Silver Age counterparts, in 1956 and 1959, respectively. And I've read those stories a jillion times!

Comment by George on April 3, 2010 at 3:29pm
I'd love to see more of Alex Toth's Green Lantern from the late '40s. A couple of them were reprinted in Detective Comics circa 1974 (during Archie Goodwin's year as the book's editor).

Comment by Captain Comics on April 6, 2010 at 8:58pm
You'd think the name "Alex Toth" would be enough to get the ball rolling.

When I read the first two volumes of Golden Age GL, what I got out of it was that A) he was supposed to be a "weird creature of the night" and 2) his ring really only worked on metal (as opposed to working on everything except wood). I don't know if either of those impressions are accurate, so I'd like to read more to confirm or deny.

Also, I don't know anything of the latter part of the series, when GL was somehow muscled out of his own strip by Streak the Wonder Dog. I'd just like to read that to see how it was handled. Five will get you 10 the answer is "badly."

Speaking of Toth and Wonder Dogs, the artist also handled a lot of the Rex the Wonder Dog series (1952-59), which I don't think has ever been reprinted.

Again I'm wondering why the obscure Golden Age stuff is only available in expensive hardcover while much of the better known (and doubtlessly better selling) Silver Age material can be found much more cheaply in softcover. I know they assume only older people will buy something from the 1940s, but why do they seem to assume "older" means "has money to burn?"

I also noticed, early on at least, GL's ring only seemed to work on metal. I suspect it became "works on everything except wood" came from several stories I've read where a villain just happened to have a wooden club to bash him over the head, since of course metal weapons wouldn't hurt him. This made it look like wood was his weakness.

Wasn't Spider-Man originally supposed to be 16? I've heard he's been established as being 15 when the spider bit him. Seems like a rather pointless change. An attempt to make him their youngest hero? I'd assumed from the way he was treated it was Iceman, who was 16. Rick Jones might have been younger but he never became a hero.

I was surprised at how relatively few "Big Monster" books there were. Marvel didn't reprint all of those stories in the 70s, but they got pretty close. (And possibly they weren't paying attention to what was getting reprinted, since Groot's story turned up twice.)

Comment by Ron M. on September 20, 2014 at 3:51am
I think Daredevil guessed in their first meeting in Amazing Spider-Man#16 that Spider-Man was about 16. In the FOOM issue discussing the All New X-Men, notes for the original team included mentioning Iceman was 16 in X-Men#1. Possibly Cyclops was originally meant to be a darker character, on the edge, since it stated he was based on Anthony Perkins.