Where Are They Now: CrossGen

In the year 2000, a new comic book company entered the scene. They would eschew the superhero fare that was typical of most comic books and concentrate on underrepresented genres such as science-fiction and fantasy. They would borrow corporate techniques, developing an in-house art studio and attracting veteran comic book creators with benefits and health plans. They garnered a very loyal audience of fans and grew quickly- briefly passing Dark Horse and Image as the third largest publisher. And then it all fell apart. Their expenses mounted too quickly and they fell behind on payments to creators and other companies. This led to public spats with freelance artists such as Robin Riggs and their printer, Quebecor. The company slashed its titles, but even the leaner line couldn’t survive. They filed for bankruptcy in 2003 and closed up shop soon after. That company was CrossGen comics.

During their brief heyday, CrossGen was also notorious for getting into public feuds. Marvel-publisher-at-the-time Bill Jemas made multiple disparaging comments about the little-company-that-could and even insulted the talent of their creators as not being good enough to work at Marvel. Even Marvel writer Mark Millar got into the act,
publicly criticizing CrossGen for not working enough with freelance creators. Yet despite the insults lobbied at both the company and its creators, when CrossGen finally folded, most of their talent found work at other companies, including Marvel. That’s not entirely surprising as many of the creators were comic book veterans with well-established careers before CrossGen. Yet many of the creators left CrossGen with higher profiles and moved on to major projects. Of course, working at CrossGen wasn’t a boon to every career. A few prominent names failed to re-surface in prominent roles after the company collapsed.

Barbara Kesel: Best-known as a writer for her work on DC’s Hawk and Dove with Rob Liefeld, Kesel was the first writer hired by CrossGen. She worked on one of their most-lauded titles, Meridian starring the adolescent Sephie, and one of their most-lambasted, The First. Kesel was one of the few creators to go down with the CrossGen ship. She is now part of a comic book packaging company called The Pack with former DC editor Brian Augustyn.

Ron Marz: Ron was the writer of Silver Surfer, X-O Manowar and the controversial Green Lantern story that turned Hal Jordan evil and replaced him with Kyle Rayner. Despite all of that experience on galactic superheroes, Marz found his niche at CrossGen working on fantasy titles such as Mystic, Scion and Sojourn. He is now the top creative force for Top Cow, writing Witchblade and Magdalena.

Joshua Middleton: Josh was one of the first young creators discovered by CrossGen. He had a brief run as the first artist on Meridian. He re-surfaced at Marvel as the artist on X-Men Unlimited and NYX. Recently, Middleton specialized as a cover artist. However, he just completed his run as the cover artist for Supergirl, which he claimed on his blog is his last mainstream work for a while.

Steve McNiven: A school teacher in Toronto before being accepted into CrossGen’s associate artist program, McNiven became the second regular penciller on Meridian.
He found a new home at Marvel, working on Ultimate titles and New Avengers before working on the biggest story of the decade, Civil War.

Brandon Peterson: Peterson was a bench player at the X-office, filling in for other artists and pitching in on mini-series such as the second Astonishing X-Men, before coming to CrossGen. For CrossGen, he launched Mystic, became the company’s art director and created Chimera. He went back to Marvel and worked on titles such as Ultimate X-Men.

More recently, he’s contributed covers to the X-Men’s Divided We Stand, War of Kings and Deathlok. 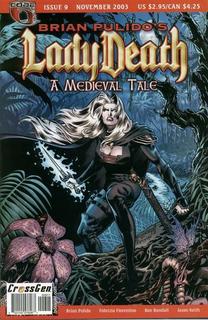 Aaron Lopresti: Lopresti made his debut for Malibu’s Ultraverse line when he worked on Steve Gerber’s Sludge. However, he was still relatively unknown in the comics field when he was hired by CrossGen and made the third regular penciler on Mystic. Lopresti went from CrossGen to Marvel, where he was the regular penciler
on a new Excalibur series from Chris Claremont. He then went from Marvel to DC where he was the regular penciler on Gail Simone’s Wonder Woman for a time. He is currently working on Justice League: Generations Lost. 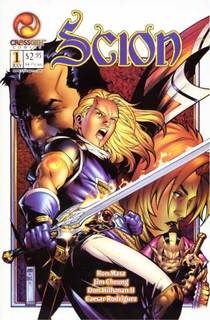 Jimmy Cheung: Jimmy had worked at Marvel’s X-office before coming to CrossGen, launching a Maverick ongoing series and contributing a vastly underrated run on X-Force. At CrossGen, he was the other half of the long-running Scion team with writer Ron Marz. He also contributed a few issues of Lady Death in the company’s waning days. Since then, he’s been a major presence at Marvel Comics. He was the co-creator of Young Avengers with writer Allen Heinberg, and contributed covers to both Avengers: Initiative and Secret Warriors. A new Young Avengers story, Avengers: Children’s Crusade, by Heinberg and Cheung is scheduled to debut this summer.

Luke Ross: Ross was associated with CrossGen for only a short period of time. He did some fill-in work on Sojourn and some of the final issues of Scion. Before that, he had done work with Innovation, Malibu and Valiant in the US and other companies in his native Brazil (his real name is Luciano Quieroz). Since then, he has become the highly-acclaimed artist of DC’s Jonah Hex. 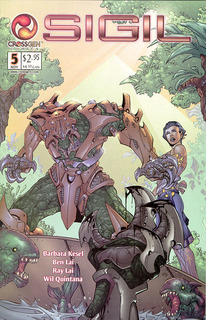 Ben and Ray Lai: The Lai brothers were some of CrossGen’s young discoveries. They were the original artist team on Sigil. However, their tenure with the company didn’t last very long. They showed up again at Marvel in 2003 as the artists on Dan Jurgens’ Thor. Despite the occasional issue or pin-up after that, the Lai brothers do not appear to be currently active in comics.

Scot Eaton: Scot took over for the Lai brothers as the regular artist on Sigil and became the longest-serving artist on that title. However, Eaton wasn’t new to comics when he came to CrossGen having previously worked on titles such as Marvel’s Silver Surfer.

After CrossGen, Eaton went back to Marvel. This time around, he was handed bigger properties, following the Lai brothers again by working on Thor with Dan Jurgens and contributing art to the X-Men’s Messiah CompleX crossover. Currently,
he’s working on the Black Panther mini-series, DoomWar.

Dale Eaglesham: The third of the Sigil artists, Eaglesham came to CrossGen after approximately 15 years in the comic book business. Some of his earlier work includes issues of Eternal Warrior for Valiant and Conan the King. Dale’s career has been pretty steady since his CrossGen days. He was the artist on Villains United for DC and on the re-launch of Justice Society of America.

Most recently, Eaglesham signed an exclusive contract with Marvel and was assigned to the Fantastic Four.

That’s a look at a dozen former CrossGen creators, which is by no means an exhaustive list. Some of the artists are currently working on Justice League: Generation Lost, Titans: Villains for Hire, Avengers: Children’s Crusade, DoomWar, Fantastic Four and Nemesis. And an original CrossGen writer is currently the top scribe at Top Cow.

Comment by Chris Fluit on May 3, 2010 at 5:31pm
Luke Ross: I didn't care much for his Crossgen work, but he seemed to really grow between that and his DC work.

I agree. I thought he was a poor substitute on both Sojourn and Scion. Then, he teamed up with Ron Marz for Dark Horse's Samurai: Heaven and Earth and I was blown away. The art was luscious and beautiful.

Comment by Cavaliere (moderator emeritus) on May 3, 2010 at 9:44am
JeffCarter - The series you're thinking of is the one that Jason mentioned by name: The Way of the Rat.

Jason - The pirate series was El Cazador and, as far as I know, it only made it six issues.

Eric - Oh, my gosh, Ruse was a terrific book but yes, it was it's best when Waid wrote it. Beatty was, as you put it, pretty good...but Waid was better.

Comment by Eric L. Sofer on May 3, 2010 at 7:55am
I miss Ruse. I would very much like to know how Mark Waid was going to resolve the book before he left it after twelve issues... about his tenure on any ongoing title (has "Irredeemable" hit 12 issues yet? No? Well, start looking for guest writers or "plot assistants" any time now...) Great concepts, great story, and Scott Beatty as the follow up to Mark Waid was pretty good - but I wish that Waid would have continued on with it. It was JUST excellent - and if you get a chance to collect the Waid issues, you will enjoy them very much, I am most certain.

Comment by Jason Marconnet (Pint sized mod) on May 2, 2010 at 12:39am
Enjoyed the article. I'd be interested in knowing more about the creative talent behind Crossgen. I picked up almost an entire run of Way of the Rat. I've only read the first arc, though. I also picked up the pirate series. I had only read a few issues of it though. IIRC, the pirate series wasn't connect to the overall storyline of the rest of the Crossgen universe.

Comment by Wandering Sensei: Moderator Man on May 2, 2010 at 12:13am
Yeah, I'd be interested in knowing what Jeff Johnson (artist of the martial arts comic with Po Po in it...name escapes me) and Bart Sears are doing now. Particularly the former. His style was beautiful.

I wasn't a big fan of Crossgen, even though I did really try hard to be. I bought so many volumes of those compendium titles.

And Jim Cheung needs to move to DC! I'd love to see his version of the DCU.

Comment by Travis Herrick (Modular Mod) on May 1, 2010 at 10:14pm
Great article, Chris. I dunno if i was into Crossgen as much as you were but I did dig it. I always enjoy seeing how creators career paths go.

Jimmy Cheung: I am surprised he doesn't get more work. I love his style and it seems like he can keep to a schedule. Vastly underrated.

Luke Ross: I didn't care much for his Crossgen work, but he seemed to really grow between that and his DC work.

Comment by Chris Fluit on May 1, 2010 at 5:06pm
As I mentioned at the end of the article, this isn't the complete list. I have enough names to do two more columns if you're interested.

Lee Houston, Junior replied to Steve W's discussion A Cover a Day
"Running late, again, but anyway... There will be at least as many collections and remembrance…"
1 hour ago

Randy Jackson replied to Randy Jackson's discussion How do the Wakandans mine Vibranium?
"Thanks. I guess that answers my question. "
8 hours ago

Richard Willis replied to Steve W's discussion A Cover a Day
"Another wrap-around. I don't like his Hal Jordan."
8 hours ago

Jeff of Earth-J replied to Steve W's discussion A Cover a Day
"Took down my previous post when I realized it was a dupe. Realized no posted this one yet."
8 hours ago

Philip Portelli replied to Steve W's discussion A Cover a Day
"Supergirl through the years!  (btw & IMO only, I don't think that Dick Giordano was a…"
11 hours ago