Who is Gwen Stacy?

Who the heck is Gwen Stacy?

That is likely to be a question a lot of movie-goers will be asking as they watch The Amazing Spider-Man, premiering this week. For the answer, we have to go back to the early years of Spider-romance, even before the Wall-Crawler’s most famous girlfriend, Mary Jane Watson. 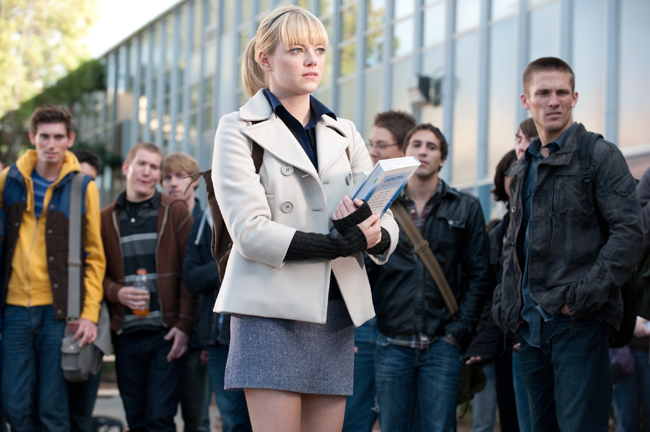 For the record, Peter Parker’s first steady (after his debut in 1962) was Betty Brant, who had dropped out of high school to work as J. Jonah Jameson’s secretary at The Daily Bugle. He also enjoyed some mild flirtation with a chick named Liz Allan (occasionally “Allen”), who was technically the girlfriend of Flash Thompson, Midtown High’s football star and Parker’s personal bully.

But Parker’s social life really kicked into gear when he went to college, beginning with Amazing Spider-Man #31, at the end of 1965. Flash followed him to Empire State University on a football scholarship, and in his first class Parker met Harry Osborn (son of the Green Goblin), who later became his best friend. In that same issue he also met a cool blonde named Gwen Stacy, described (by Harry) as “the ex-beauty queen of Standard High, as if you couldn’t tell.” In a foreword to Marvel Masterworks Vol. 16, which reprinted the story, co-creator Stan Lee described her as “a dramatic new love interest, a girl destined to play a major role in Peter’s life, the stunning, star-crossed Gwen Stacy.” 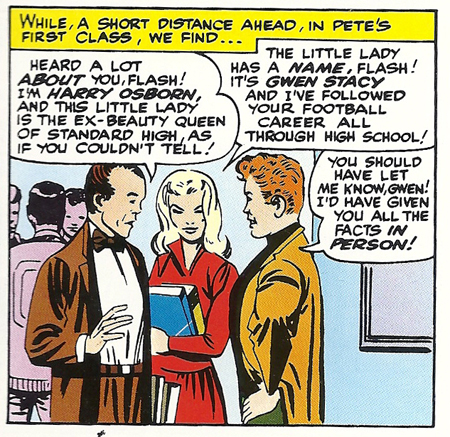 Mind you, this was almost a year before Parker met Mary Jane, the niece of his next-door neighbor. Aunt May had been trying to set him up with MJ for years, but Parker had always dodged, thinking she was probably a dog. But Parker’s friends had seen her, and it was a running gag that everyone knew she was va-va-voom except Parker! That finally ended in Amazing Spider-Man #42, when Parker (and the readers) finally saw Mary Jane, and heard her famous (and accurate) line, “Face it, Tiger! You just hit the jackpot!”

Parker and Stacy didn’t hit it off at first, but eventually became an item. Stacy was brainy, beautiful, patient, loyal and also, like Parker, interested in science. She was the perfect girlfriend – too perfect, as it turned out.

In Les Daniels’ Marvel: Five Fabulous Decades of the World’s Greatest Comics, 1970s Spidey writer Gerry Conway said “Gwen was a bit of a stiff, actually.” Writers struggled mightily to make her more interesting. She left town, and came back. She loved Parker, but hated Spider-Man. Her father, a retired police captain who suspected Spidey’s secret identity, was introduced. But no matter what the writers did, readers liked Mary Jane better. Even when they deliberately sabotaged MJ’s looks by giving her a bad haircut! 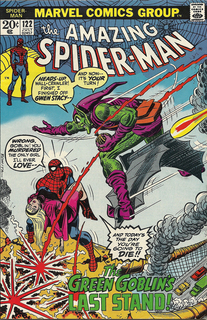 “We always intended that Gwen would be the one Peter would marry,” said Stan Lee in the Daniels book, “but for some reason or other, Mary Jane always seemed to have the most personality.”

In 1973, the Spider-writers gave up, and -- SPOILER ALERT! -- had the Green Goblin toss Gwen Stacy off the George Washington Bridge to her death.  (This is why Spider-fans start chewing their nails every time a girl is on top of a bridge in a Spider-movie.) That left the field open for Mary Jane, who eventually married Peter Parker in 1987.

Of course, this is comics, which means back story is being modified – or ignored – all the time. In various media, Mary Jane (and sometimes Gwen and Harry) appear in Parker’s high school years – or even in junior high, like in the“Ultimate Spider-Man comic books, or the Young Adult novels starring Mary Jane. Currently the Parker-Watson marriage has been erased and forgotten (as well as a child the couple once had). And believe it or not, one 2004 story established that Stacy had sex – and twin children – with Norman “Green Goblin” Osborn before her death! Thankfully, that story has dropped into the memory hole as well. And in the Tobey Maguire Spider-Man movie series, Gwen (Bryce Dallas Howard) appeared as a love interest after Mary Jane (Kirsten Dunst), reversing the original order.

The upshot is that in any given Spidey cartoon, movie, novel or even comic book, you will see variations of Peter Parker’s wide-ranging cast, popping up at different times and in different combinations than they did back in the swinging ‘60s.

But you, loyal readers, know the original Gwen Stacy story – whatever variation of it shows up in The Amazing Spider-Man.

I enjoyed your summary, Cap! I haven't read much of the early Spider-man stuff (a problem I'm trying to rectify). I was never overly familiar with Gwen Stacy, I was always more of a Mary Jane fan. However, I did enjoy her portrayal in the newest Spidey flick. I never liked the portrayal of Mary Jane in the previous films, it never felt like Mary Jane and on top of that she was unlikable.

I always thought Peter met Gwen and Harry in high school, never knew it was actually in college! I guess you learn something every day.

Thanks! To some of us older fans, Mary Jane is still the "new chick"!

I have to admit, I'm with you there, Cap. Possibly, it's because I bought more Spidey issues before MJ shut Peter's door as he grieved than after she did.

I was amazed at how much Emma Stone looks like Gwen in the photos I saw. It was like she jumped right off a Romita page!

She really does. Maybe it's the stance -- look at the photo above, the way she's carrying her books, and the Ditko illo that follows -- or the way her hair is always done up in a way Romita would have drawn. Or maybe it's the miniskirts and go-go boots!

I think I've mentioned it before, but It's weird how Emma Stone and Bryce Dallas Howard are redheads who dyed their hair blonde to play Gwen Stacy, while Kirsten Dunst is a blonde who dyed her hair red to play Mary Jane. Strange but true.

Also, I've often decried how Spider-Man's supporting cast has been whittled away by unnecessary deaths, but it occurred the other day to me that A) death has been part of Spider-Man's story since the beginning and B) most of Spidey's dead friends have remained dead.

Now, I'm not counting villains, because they've always come back from the dead in adventure fiction, going back to The Joker in Batman #1 or even earlier, to the pulps. But supporting cast? Well ...

* Peter Parker's parents were dead on page one of his first story, and have remained dead.

* Uncle Ben died at the end of his first story, and has remained dead.

* Farley Stillwell died in Amazing Spider-Man #20, and has remained dead.

* The Crime-Master died in Amazing Spider-Man #26, and has remained dead.

* Mendel Stromm died in Amazing Spider-Man #37, and has remained dead.

* Frederick Foswell died in Amazing Spider-Man #52, and has remained dead.

* Richard Fisk died in Amazing Spider-Man #85, and has remained dead.

* Captain Stacy died in Amazing Spider-Man #90, and has remained dead.

It was this nearly uninterrupted run of permanent death that so chilled me when Gwen died in Amazing Spider-Man #121. I don't know if today's fans can realize what it was like in those halcyon days to see a character die and know in your heart of hearts that it's permanent. I remember telling my sister that month that "people don't come back in Spider-Man comics." It was a strange mixture of feelings. I was shocked because there had been no foreshadowing, I was deeply saddened because I really liked Gwen Stacy, and I was also a bit ... Impressed? Solemn? ... because I understood that I was witnessing history.

Now, my perspective could be off because of strong memories of Gwen's death. Certainly, it's a commonplace among all superhero comics that supporting characters tend to stay dead while villains appear to die and return nearly constantly. But I tend to think death -- permanent death -- has been a bigger factor in Spider-Man's career than most superheroes.

Actually, thinking about it further, I seem to remember Richard Fisk coming back. As The Rose? I'd have to look it up.

I think there's been so much permanent death for Spidey's cast because he has such a big supporting cast. Few others have as much (besides maybe Superman), because few have a civilian identity that's so important. So all the civilians he knows have connections, etc., and they can die.

But they aren't *so* critical to his life that there's big drama in reviving them ("This issue! Farley Stillwell returns!) Or, they were *so* critical that reviving them would undo something so important that nobody dares touch it. (Well, except for the Gwen Stacy thing. But I think now she's Bucky-dead. Excuse me, Uncle Ben-dead.)

Death means more to the civilian cast, and Spidey had a huge one. Most others are satisfied to spend their time yelling and hitting other strong guys.

Actually, thinking about it further, I seem to remember Richard Fisk coming back. As The Rose? I'd have to look it up.

[Spoilers follow for stories reprinted in Essential Spider-Man v.4 and Essential Captain America v.3.] Richard Fisk wasn't killed/put into a coma in the Schemer story, but in the Fifth Sleeper story in Captain America. In Amazing Spider-Man ##163-164 [more spoilers] the Kingpin stole Spidey's life-force to revive him, and though Spidey got it back that was enough to restore his own life-force.

Incidentally, the Kingpin's survival of the climax of #164 was explained when he next returned in Amazing Spider-Man. At the end of the story, in #197 [more spoilers], he retired from crime due to an ultimatum from Vanessa. That's why he was in retirement at the start of the Frank Miller storyline that brought him into Daredevil's title, which began in Daredevil #170.

It's weird how Emma Stone and Bryce Dallas Howard are redheads who dyed their hair blonde to play Gwen Stacy. Strange but true.

Technically it's strange but untrue. Not to go all Us magazine on you or anything (I actually read it in Rolling Stone, honest), but Emma Stone is a blonde:

Yes, I saw a recent interview with Emma Stone and she said blond is her natural hair color.

I remember being shocked/surprised by Gwen's death in ASM 121, especially the "snap" sound effect, signifying her broken neck. I wasn't that invested in Gwen, since Betty Brant was his first as far as I was concerned. As I recall they already were beginning to show that Mary Jane had more depth than she let people see. In the first Tobey Maguire movie, they seemed to make a point of Gwen-surrogate Mary Jane being saved differently by Peter descending to catch her instead of simply using his webline. Thanks, Captain, for pointing out that the overwhelming  majority of Spider-Man deaths are permanent. I think that the tendency to make all deaths temporary in recent comics trivializes death to the detriment of comics.