With two new GNs, Vertigo Crime stakes out the genre 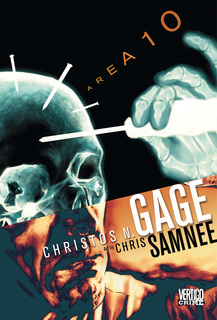 Area 10 ($19.99) is written by Christos Gage, whose many credits include Law & Order: SVU, so he knows his way around a police procedural. Which this graphic novel is, as it follows NYPD Detective Adam Kamen in the pursuit of a serial killer dubbed “Henry the Eighth” due to his predilection for chopping off (and keeping) his victims’ heads.

But there’s a paranormal twist. Kamen is stabbed in the forehead, injuring part of the brain called “Brodmann’s area 10” (hence the novel’s name), which some ancient cultures believed expands the mind. This accidental “trepanning” – a medical procedure that relieves pressure on an injured brain – gives Kamen headaches, plus what appears to be visions of the future and the past. Plus, it dovetails with Kamen’s investigation, as his serial killer is also evincing interest in the procedure – and suddenly the detective looks good for the rap. Is Kamen really enjoying enhanced awareness, or is he simply going mad?

Truth be told, I found much of the storyline to follow formula. You know when a pretty psychiatrist is introduced, for example, that she will inevitably see Kamen as more than a patient. But otherwise it’s a taut thriller, the trepanning angle is fascinating and Gage keeps enough forward momentum that I didn’t mind the overly familiar bits. Plus, artist Chris Samnee (The Exterminators) forgoes razzle-dazzle for clear, crisp storytelling that doesn’t draw attention to itself. You know you’re in the hands of a pro when three same-age women share a scene, and you can distinguish their faces at a glance. 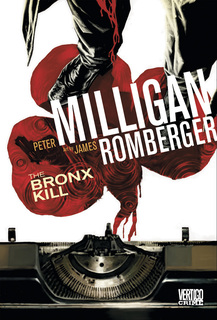 The Bronx Kill ($19.99) is a missing-person mystery. The victim is the wife of Martin Keane, a New York writer whose family has been cops going back at least three generations. Keane rejects his heritage, but his wife’s disappearance thrusts him back into that world, and into the company of his estranged father – especially since Martin is the prime suspect.

Bronx Kill is written by Peter Milligan, who has built a career writing quirky and sometimes twisted comics (The Enigma, Human Target), so you know something extreme is coming down the pike. And, sure enough, when the Keane family’s dirty laundry is aired, it’s enough to make you want to take a shower.

Artist James Romberger’s style is sketchier and more cartoony than I’d like for such a serious subject, but his storytelling is flawless. Bronx Kill – named for the lonely stretch of land connecting the Harlem and East rivers where Keane’s great-grandfather was murdered – is an unhappy story but one that will make you think your own family is normal.

Two of the first three Vertigo Crime GNs starred John Constantine, and were more horror than crime. With these two GNs, Vertigo Crime is making more of a mark in its namesake genre.

I never expect much of reprints from the 1950s, and am therefore rarely disappointed. Marvel Masterworks: Atlas Era Jungle Adventure vol. 1 ($59.99) is a case in point. This book reprints Lorna the Jungle Queen #1-9 (Lorna the Jungle Girl after the fifth issue), which first appeared in 1953-54. I assumed that Lorna would owe a lot to the original comic-book jungle queen, Fiction House’s Sheena, and it did. That’s not a complaint; Sheena’s early success (her U.S. debut was in 1938’s Jumbo Comics #1) spawned countless imitators, and Sheena herself follows the Tarzan blueprint from 1914.

So Lorna is a typical blonde, busty jungle queen who protects her leafy home. The one really unusual element is her boyfriend, “white hunter” Greg Knight, who varies from formula by constantly telling Lorna that “the jungle is no place for a woman.” His macho dismissal of the jungle queen probably played well with the pre-adolescent boys that constituted the audience, although an adult sensibility would observe that Knight is constantly wrong and Lorna shares the joke with the audience (even breaking the fourth wall with the occasional wink). And no doubt some adults did read the book (see “busty” above).

This conceit is occasional fun, but to tell the truth, Knight is such a jerk it’s painful and it degrades Lorna to pursue him. Plus, his “white hunter” gig is so mercenary that he appears to have no moral center.

But you can’t fault Lorna for being a product of its times. I enjoyed it for the fine artwork (including Russ Heath, Jim Mooney and Werner Roth) and as a simple pleasure from a less complicated time.

Comment by Jeff of Earth-J on February 26, 2010 at 5:57pm
I have been awaiting your review of Lorna with bated breath (and I just knew you were going to get to it eventually!). I love this stuff yet I can't disagree with a single criticism you made. Ironicaly, the best art job in the bunch was the Bill Everett parody tacked on at the end!